From a cast of emotionally-fueled characters, Jake is certainly an outsider on Adventure Time. We’ve seen him time and time again ignore significant changes in his life and as he attempts to treat drastic shifts as if they are easily manageable and barely noticeable. This has always been a consistent trait of Jake’s character, even in the earlier seasons and more comedic centered episodes. Trouble in Lumpy Space features Jake largely downplaying a potentially crucial life change, while Chips & Ice Cream has him ignoring a physical change almost completely. On the surface, it looks like Jake is accepting change exceptionally well, though it’s clearly more so the denial that any change has occurred to begin with. Abstract exaggerates said denial to extreme lengths in the best way possible. As we witnessed recently in Cloudy, Jake struggles to be open about his fears and inner conflict, and Abstract takes it a bit further by showing his resistance to any form of transition around him, good or bad. It isn’t necessarily change itself that Jake fears, however. Over the course of the show, we’ve seen Jake go through several transitions, namely becoming a father. He’s always found comfort in the fact that those around him, including his brother and loved ones, have looked at him as the same person he was before. Now, with changes noticeably happening around him, Jake is terrified that such changes may result in a total change of his character, and his life. 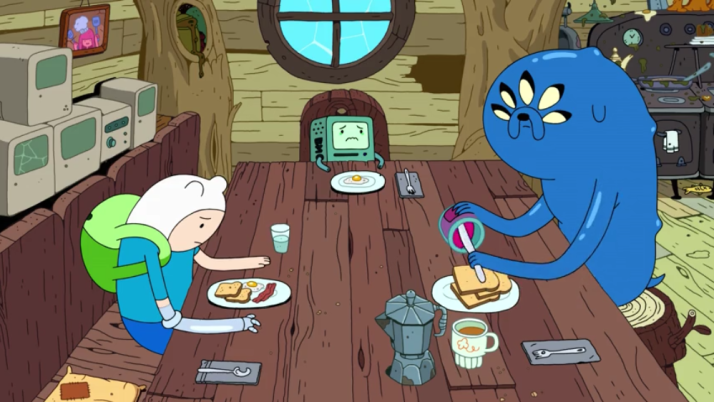 Jake’s denial of such changes really shine through in the first few minutes, and it’s really interesting to see how each character acts in response to his new form. BMO is a child at heart, and is understandably the least accepting to such changes. We’ve already seen in The More You Moe, the Moe You Know that BMO perceives change as something Earth shattering, rather than a natural part of life, so it’s no wonder that he’s so opposed to such jarring shift. Finn is a bit more open to the new alien-like Jake, though not by much. He struggles to even look his brother in the face and bats around the topic rather tackling it head on, which is similarly understandable. Jake gets defensive after Finn only brings up the obvious, thus Finn tries to be as supportive as he possibly can, while still being the slightest bit freaked out by his brother’s transformation.

On the even more supportive side, I love how kind and caring Lady is toward her S.O. She never passes judgment against him and shoots the dirtiest of looks towards Dirt Beer Guy (in his final appearance) for invalidating her boyfriend. It just goes to show how sweet she really is, having Jake’s back no matter what he looks like or does, as long as he is content with himself. This is practically one of Lady’s only standout roles in season eight, and I’m glad we do get an opportunity to revisit the kind-natured character every so often. I also love the subtlety in her moments with Jake… as she says she loves Jake, he responds with, “I love me too!” referencing his desire to stay the same forever.

Things quickly go astray when Jake begins experiencing strange shared dreams with Jermaine, which aren’t as prophetic or metaphorical as most AT dream sequences go, but are just as bizarre. Something that is immediately noticeable within this episode is that the backgrounds standout more than usual, and that is a result of former AT artist ghostshrimp returning to the team! Don’t get me wrong, we’ve had some great background artists following his departure, but I don’t think anyone has quite matched ghostshrimp’s legacy since. The amount of detail he puts into every single aspect of the screen is incredible; when I think of AT backgrounds in general, I think of soaking in every individual piece that I can analyze for further implications. Ghostshrimp gets this better than anyone, and really puts his all into making scenery look as bizarre and unique as possible. And what better way to do that than with an episode entitled Abstract?

The episode title, of course, also connects to a more literal meaning. Jake perceives Jermaine’s painting of abstract portraits as out of character and concludes that something must be wrong with him, which quite clearly connects to Jake’s mindset that if he chooses to change, it may lead to dire consequences for himself. Finn helping out Jake is sweet and brings up an adorably childish side of his character, in which he draws out his weird dreams using crayons. I’d love to see what he whipped up based on his dream experiences in Frost & Fire. It’s also funny to note that Finn continues to avoid making eye contact with Jake during this experience, likely because it’s frankly strange to view his brother, of whom he’s known since birth, as a five-eyed, blue, alien-like creature. The crayon therapy proves to be ineffective for Jake, as he acknowledges that changing isn’t in Jermaine’s “nature.” This similarly applies to Jake’s thought process about his own being; in Cloudy, Jake mentions that being the responsible caregiver means that he isn’t supposed to talk about his stress and anxieties to Finn. Thus, he also believes that Jermaine isn’t supposed to express himself through abstract art because it doesn’t represent the Jermaine that he once knew. Jake also dismisses the abstract art that he draws himself, calling it out as “just squiggles.” Abstract art later becomes a metaphor for personal change, to which the previous moment adds to, as Jake views change as something insignificant.

Though, through his soul-searching, Jake does decide to set out to find Jermaine (equipped with his blue pack! With all of the disappearing props throughout AT‘s eight years on air, I’m glad that Jake’s trademark backpack has still remained a consistent element). During his travels, he runs into James, a character of whom I’m not very fond of, but I was still happy to see. He even gets a few laughs out of me this time around – I typically never found James’ “WHA?” catchphrase to be particularly funny, but there’s something about him using it a third time around that gets a kick out of me. I can’t really explain why, humor’s just weird like that. I will say that I think the middle section of the episode is a bit weak. A lot of it feels like it’s just plodding until Jake finally reaches Jermaine. I didn’t find the wall of water that funny, nor did I with Bryce, whose interactions with Jake felt particularly purposeless. It’s even more distracting that Bryce’s voice actor, Jon Wurster, also portrays the wall of water, who appears directly before Bryce. Wurster’s voice really isn’t that difficult to identify.

It’s very nice to see Jermaine again, who seems noticeably happier. I dug the stick-in-the-mud Jermaine we saw in his debut episode, but seeing him much more relaxed and compassionate towards Jake is just as rewarding. Though he is compassionate, he doesn’t bullshit, and he’s probably the only one to be so straightforward to Jake thus far. He says it like it is – Jake has changed and despite his denial and ignorance to it, he can’t remain stagnant. His personal changes come from several different factors: 1. He’s more open and honest about his emotions, as Cloudy proved. 2. He’s getting older and wiser, and even more mature as a result, but also retains his sense of fun and loving nature despite everything. With all of these changes at hand, Jake does worry that he’ll no longer be able to be the fun-loving guy that he once was, but Jermaine reassures him that he can still remain the same person while changing regardless. Jermaine’s interactions with his bro are irresistibly sweet, especially with lines like, “He [Joshua] told me to be supportive, but I would’ve done that anyway.” Jermaine painted a picture of a jealous person who resented his brother for all that he doesn’t have, but Abstract proves how much Jermaine truly loves his brother despite their differences.

In an effort to understand his brother’s artwork, Jake examines Jermaine’s paintings in a trippy, peaceful sequence.

“The shapes are always changing. Changing is their normal state, like us. Even if we’re not changing on the outside, we’re changing on the inside constantly. There’s some stuff about me that I’ve been ignoring for a long time. I’m afraid of that stuff. But it’s part of who I am. As long as I know the shape of my soul, I’ll be all right.” 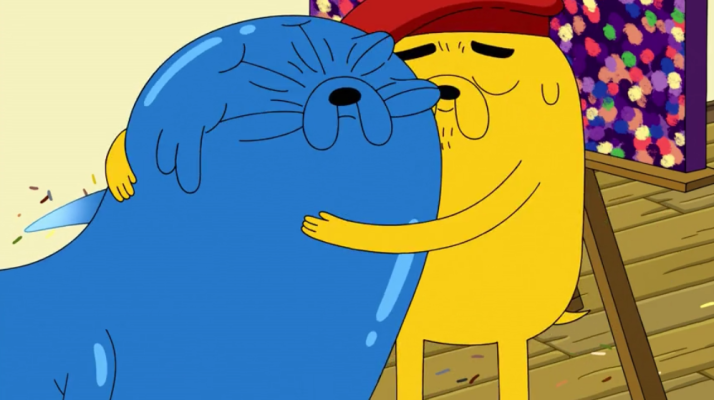 Change is a core theme of Adventure Time, and this is yet another beautiful sentiment. It’s a reminder that, whether you like it or not, change will happen and is ALWAYS happening. Despite all of it, however, one’s soul and values do not change. Learning to trust one’s self is much more vital than trusting the finite structure of the ever-changing world, and Jake recognizes that. His ability to acknowledge that, whatever changes do happen, he’ll still be the same Jake that he recognizes to be good. This is another one of those Adventure Time moments that is pretty divisive among the fanbase. This is an example of AT kind of batting around the status quo to ensure that everything remains familiar. I’ve mentioned before that I was mixed with Finn’s arm coming back in Breezy; on the one hand (no pun intended), it was an incredibly dumb decision to return his arm to normal only episodes after he had lost it, while on the other hand, it still really worked with the theme that the episode set to accomplish, and I feel the same here. Jake’s appearance changes only after he discovers that his entire soul doesn’t have to change even if he does, which visually leaves us with the yellow stretchy dog that we’ve come to love. I’ll even say that I don’t think it was a dumb decision to bring back yellow Jake at all – the shapeshifter design is a bit… wonky. It’s fine for what they set out to accomplish within this episode, but I don’t really think I’d want Jake to look like this for the rest of the series. I think when fans complain about this type of situation, it helps to wonder if they truly want the change in the first place, or if they just don’t want any type of change to be retconned. The latter’s understandable, but I really do question the former. Jake returns home and finally recognizes that he’s returned to normal, knowing that he’s changed, but is still the same on the inside. Everything stays, mothafuckas!

Abstract is a pretty solid entry. It has it weaker and more controversial moments, but at its core, it’s a solid developmental episode for both Jake and Jermaine. After so much mystery and ambiguity about Jake’s character, season eight has really done a great job of showing us subtle glimpses into Jake’s psyche. It isn’t much, but then again, Jake’s baggage isn’t really his strong point to begin with. He’s a fun, comical, and loving character, and as Abstract has shown, its a title he chooses to defend and represent above everything.

Also, fun fact: all of the abstract paintings in the episode were created by Laura Knetzger, who co-boarded this episode. This is Knetzger’s last episode working on the show. Thanks for the fun, Laura!

Favorite line: “Funny, though, I can kind of taste the toast’s emotions or something.”