Apple Thief is Tree Trunks’ return to center stage after her revival in Crystals Have Power. It’s a basic mystery themed story, and it’s a pretty decent one at that. AT has done many, many noir or mystery-esque stories down the line, and this one isn’t really one of the stronger episodes. However, I do have a bit of a soft spot for Tree Trunks, so it makes this experience at least passable. 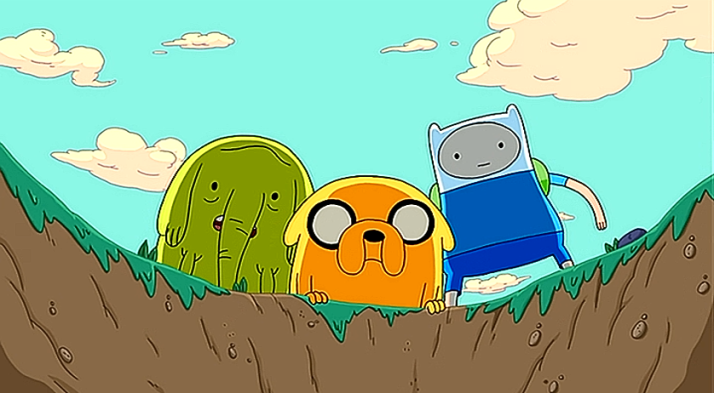 There’s some nice introductions in this episode including a brief bit of history into Jake’s criminal past, which we come to know as a central part of his backstory and early life. Finn’s reaction to it is perfect as well, he just briefly glances over it without even asking follow-up questions. We see a bit more into the Candy Tavern, which is a very enjoyable unseen aspect of the Candy Kingdom. We’re used to seeing Candy People who are strictly bubbly and dimwitted, so seeing a tougher, grittier version of said Candy People is really amusing (I love the image of a candy cane person on one of the bathrooms. What is that even supposed to represent?). I especially like the two gangs introduced in this episode, and almost wish they’d make subsequent appearances. They’re really cleverly woven into the plot, and I really wanna know what’s up with the Dr. J gang and the other rival group. Could totally see it working as a West Side Story homage.

This episode also introduces Mr. Pig, whose presence on the show is somewhat of an enigma to me. I never know really how to feel about him, his personality is never really fleshed out in full. He’s just kind of a reserved, quirky dude. Ron Lynch is really what carries his entire character though, he does a terrific job of giving him a sense of dry sincerity that’s completely monotonous. If you’re not familiar with Ron Lynch, check out Home Movies. It’s great!

Besides that, there are a good handful of funny gags in this episode: I love Raggedy Princess’s brief cameo and how Finn, Jake, and Tree Trunks just completely ignore the fact that she fell and is stuck in a ditch. Raggedy Princess is one of my all time favorite princesses in the show, I just wanna give her a hug every time she’s on screen. That girl’s got, like, zero self-respect! I like Finn, Jake, and Tree Trunks trying to be tough, and TT thinking that eating toilet paper will make her seem grunge. In addition to that, I just enjoy the chemistry between Finn, Jake, and Tree Trunks. Finn and Tree Trunks’ relationship went in a bit of a formulaic direction back in Tree Trunks, but I just really love how genuinely sweet to one another they all are. Tree Trunks is a character that certainly requires a lot of patience to deal with, not because she’s antagonistic or obnoxious, but because she’s simply old and senile. Finn and Jake have the perfect amount of optimism and acceptance when dealing with her, and watching the three of them together is just really endearing.

Besides that, it’s a pretty okay episode. Nothing that leans in the direction of really good or really bad, it’s just relatively subpar. There’s not really anything that noteworthy either. The resolution to the conflict of the episode isn’t really predictable, but it’s just something that doesn’t feel ingenious or hilariously executed. It’s just… cute, really. I think that’s the best way to describe this episode: cute. It’s not one that’s really strong in its story, or even its premise, for that matter. However, it is relatively enjoyable from beginning to end, and the characters are delightful to watch either way. Definitely not a strong episode, but one that’s perfectly passable for what it is.

Fun fact: Nick Jennings accidentally fucked up with the backgrounds in an early version of this episode and drew every tree with apples. Good thing he picked up on that!