Well, I hope you guys like cats, because the bare essentials of Box Prince is simply that cats are silly and cute and we should laugh at them. It’s a pretty disposable episode that was born out of an already pretty empty story, that doesn’t really have any of the usual AT goodness to make it stand out on its own. And it’s quite a shame seeing as how we got really fun and energetic bits of fluff with Love Games or Time Sandwich.

The story is about as paper thin as possible; Finn traveling to a supposed “Box Kingdom” and helping this “Box Prince” regain his status sounds like a funny idea when written down, but the idea of the entire joke of the episode being “these are just cats and nothing else” makes the entirety of the episode feel quite repetitive. The joke wore on me about five seconds in, and from that point on, it really just felt like a big waste of my time. No conflict, no actual jokes outside of the initial concept, and absolutely no investment from myself, as pretty much anyone going into this knows exactly how it’s going to end. In addition to that, I think Finn’s portrayed as a little too dumb in this one. I appreciate that he was willing to look upon the cat and take his supposed dilemma quite seriously, though I can’t really believe that he would actually take this issue seriously. Or rather, even make up this issue in his head. I would’ve liked if, at the end of the episode, Finn simply acknowledged that he was going along with it the entire time and said something along the lines of “that was a fun waste of 11 minutes,” but otherwise, I think this scenario is a bit tough to believe. Finn isn’t the brightest bulb in the shed, but he’s not flat-out dumb either.

Jake’s bit in this episode feels even less inspired. I’m not a fan of Jake when he’s merely portrayed as a lazy dick; the last episode did such a good job of showing how awesome it is when he dedicates himself to something, and especially when it’s Finn. Yet, here we see him barely even looking up at Finn and telling him to go away so he can play BMO and eat nachos in peace. Feels kind of day and night, doesn’t it? I don’t mind Jake’s laziness to a degree, but when it brings down the overall energy and pleasantness of the episode, it becomes a bit of a problem it my book. But people love his quote “if you get everything you want the minute you want it, what’s the point of living?” which is followed by a somewhat humorous montage contradicting this statement, but still, I don’t think makes Jake’s mostly detached behavior any more fun to watch. And a lot of people like to turn and say, “oh, well this is why Jake doesn’t always use his powers to get himself out of sticky situations, because he wants to deal with his problems!!” Well, if that’s the case, that’s wildly ridiculous and somewhat psychotic from Jake’s perspective; if Jake really allows himself and Finn to be put in potential danger simply because he wants to “deal with life’s problems,” that’s a little insane and I don’t really think that’s what the line was intended to imply at all. The only reason I like this subplot slightly better is because of how BMO and Jake work off of each other. It’s by no means terrific interactions, as it’s basically just BMO glaring at Jake after every single comment he makes, but it is nice to see the two of them just simply hanging out together. It’s rare we get to see such a mundane and laidback occurrence in place.

This episode seems like one Somvilay Xayaphone and Seo Kim enjoyed doing a lot, simply because it seems like their interests are at their fullest potential. Somvilay gets to include his infamous anti-humor and Seo Kim gets to fill the episode with adorable kittens. But none of their work really strikes a chord; Somvilay’s drawings can get a giggle here and there, but his actual jokes, or in this case non-jokes, don’t really hit the mark on any level. I remember getting the pun, “na… chos,” when I first heard it, but just ended up reflecting back on it and not thinking it was that funny at all. In addition to that, the jokes don’t really work off of logic much either. Like, if the kingdom is supposedly not authentic, then why do the boxes change faces? I could see if this was used as a point to show how the kingdom was actually real, but the point by the end of the episode is that it isn’t.

I think this episode is best on a visual scale. Again, I don’t get into the actual drawings of Finn and Jake much, but the backgrounds look really nice, especially in the Box Kingdom. There’s also a moment of really nice animation when Finn is following Box Prince through the forest that particularly stuck out to me. 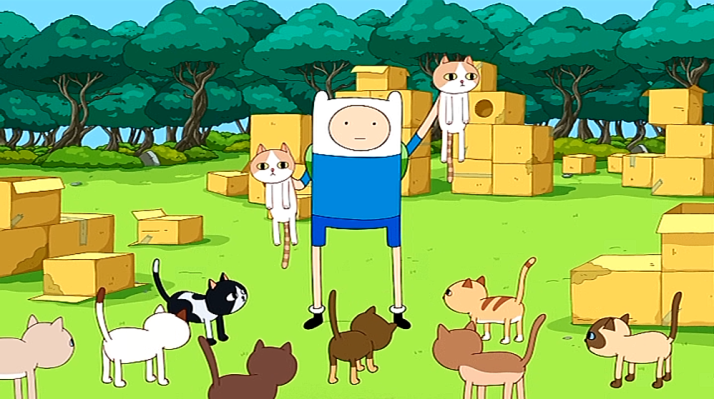 But by its end, I almost completely forget what I have just watched. Box Prince ends up feeling like a waste of time, with little lasting impressions outside a few key moments. But I will say this about it: it’s nowhere near good, but it’s not particularly awful either. Yet, it’s that statement that makes it somewhat even more deplorable for me. If an episode’s good, I can go in great lengths to talk about why it’s so awesome. If an episode is bad, I can go into detail on why it doesn’t match the standard quality of AT. Box Prince is somewhere in the middle of those too, and feels more like a requirement for me to cover than something I’m actually interested in writing about. I feel bad tearing into such an inoffensive episode, but as AT has proved time and time again, it can add substance to just about any story. Box Prince, unfortunately, is not one of those stories.

Favorite line: “Floss is for losers.”