Out of all the recurring characters in Adventure Time, I don’t know a single character who disappeared for a longer period of time than Susan Strong did (not counting original one-shots like Me-Mow and Science Cat). The gap of 119 episodes between Beautopia and Dark Purple made it feel as though she was never going to appear again, but this episode returns her to the spotlight. Unfortunately, her first episode in three years is largely unremarkable, and while I don’t know if I would call it awful by any means, I think it kind of comes off as uninteresting on almost every level. 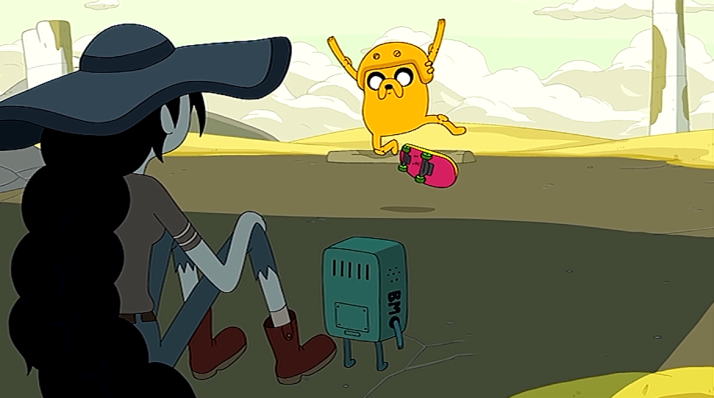 The beginning scene is the best of the episode, and genuinely enjoyable at that. I loved seeing Finn, Jake, BMO, and Marcy hang out after how long it’s been since we’ve seen this group of characters together. Even though Marcy had a brief moment of screentime in Astral Plane, it’s really rewarding to see her again here, especially when it means she gets to just kick back with her boys. Hell, it even feels like forever since we’ve seen BMO! Seeing him all giddy over Jake’s skateboard tricks made me realize just how much I missed his presence. And Jake’s skateboarding was also pretty gnarly; love how this becomes and actual trait and interest of his character. The way Jake and Finn get excited over the Super Porp delivery into the vending machine just felt like classic Adventure Time, and something only the bros could get into to. It’s somewhat clever to me how Super Porp has been seen in the background of a ton of different episodes, and even in Simon & Marcy, which helps drive forth the point that the soda has been around for 1,000 years. Again, another classic AT move that picks up on details that most wouldn’t even notice. Jake’s explanation for not wanting to explore the Super Porp factory is an obvious segue, but one that feels totally in line with his character, as Jake would likely prefer enjoying the simpler things in life in complete ignorance, rather than ruining those simple things by investigating further.

And that segue takes us right into Beautopia, where we spend the rest of the episode with Susan Strong and her new squadron of sidekicks! Yay, I guess? Look, I’m not one to complain about season six’s method of taking obscure side characters and giving them their own episode; for the most part it works, with episodes like Little Brother, Nemesis, Thanks for the Crabapples, Giuseppe!, and Evergreen, but other times it doesn’t, as seen in Sad Face and Gold Stars. I think the biggest thing that weighs this one down is actually its strongest element, which is that beginning scene. An episode featuring Marcy, Finn, Jake, and BMO exploring an underground factory sounds entirely more interesting than what we actually got. It’s not that I don’t like Susan Strong, but I think all of the interesting bits of her character practically relate back to Finn. Not saying she can’t work on her own, as we see later with the Islands arc, but otherwise, I really enjoy her unique connection to Finn more than anything, while I think she’s just okay on her own. And it doesn’t help that we haven’t seen her in over a hundred episodes… any investment I did have in her character was kind of bogged down by the fact that we literally never see her, and I would have wanted something a bit more interesting to chew on than to watch her try to stop a corrupted soda factory. It really feels like this was mostly just an opportunity to reveal the metal implant on the side of her head, which didn’t even really phase me much at all. Again, I think this was a necessary development down the line that becomes way more interesting once it’s explored, but again, it feels like nothing more than a teaser for what’s ahead, rather than a natural part of the episode. Granted, I think it was obligatory that SOME new development for her character was included in this episode, given how long its been since she has appeared, but it’s still frustrating that every Susan Strong episode so far feels like it’s just blue-balling fans who want to know about her true nature. It isn’t for a whole season later until we begin to get some legitimate answers. 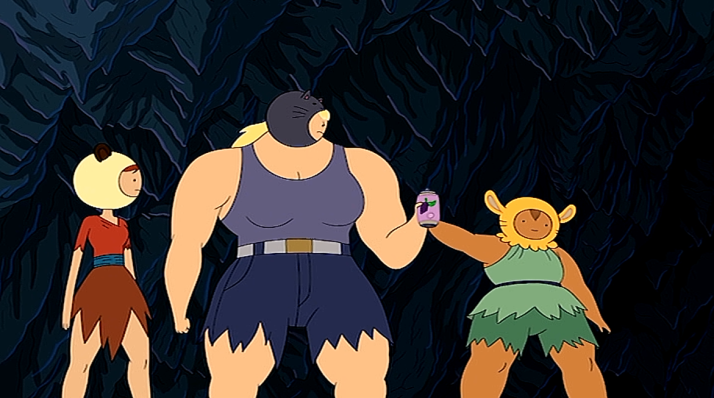 The story itself is pretty unremarkable as well. I like the environment of the factory, and the purples in this one really pop, but I feel like the conspiracy is something I could care less about. I dunno, maybe it just wasn’t funny or interesting enough, or maybe it’s the fact that this one kind of ripped off Futurama’s slurm episode, but I just find myself utterly bored by the plot. It has its moments throughout, even though they are few and short. Some of the workers are funny, namely the one that keeps muttering “uh-oh!” over and over again, and that porp beast was pretty sick. There’s hints of good animation here and there during the action sequences, even though the action itself is nothing spectacular. I actually get into the smaller moments more than anything; I like how Susan’s one friend, Sally, speaks in sign language as opposed to English. I can’t think of a single other character that comes to mind who does so, so it’s nice to get this bit of diversity in the Land of Ooo. Also, Susan’s English itself seems to have gotten better, even if she still speaks in the third person and through broken sentences. It helps that gap in time to at least feel beneficial to her character, and to allow her to grow up a bit.

The climax is pretty bleh. I like the concept of Super Porp spanning multiple generations, but the way it’s executed with Cheryl is pretty lame. I guess it could have been some kind of cool allusion to slave labor, but it’s once again muddled by the fact that it isn’t given any time to develop. A majority of the episode is Susan traveling through the factory, and about ten seconds are actually dedicated to Cheryl and her plan. The dilemma is barely given any time to develop, and is resolved in the matter of seconds. Also, Susan’s disdain for Super Porp as a brand is kind of odd to me. I mean, does the entire factory really deserve to be destroyed just because it was headed by a corrupt ruler? Couldn’t Super Porp just continue to exist under new management? I just find it weird that Susan continuously points out how bad the soda is when it isn’t having any negative effect on other people. Dunno if this was just a result of her ignorance, or if it was a result of clunky writing.

But yeah, this one is kind of a snoozefest otherwise. I can’t really think of a single thing that sticks out to me during Susan’s story, and it feels entirely unremarkable in nature. While the timespan between Beautopia and this episode has something to do with Dark Purple’s failure, I don’t think it would fare much better even if it did air earlier. It isn’t very funny, it isn’t very interesting, and Susan Strong isn’t very compelling outside of the reveal that she has some sort of attachment on her head. Even when one of the “obscure character spotlight” episodes do fail, they are at least is somewhat unique or interesting. Sad Face is pretty bland, but I would have never expected an episode to be focused solely on Jake’s tail. Dark Purple just proves to be pretty unremarkable in every way possible, and provides for one of the dullest episodes of the season.

Favorite line: “Alright, well, it’s one month later.” (Because I say that every time a month has passed too, Jake.)