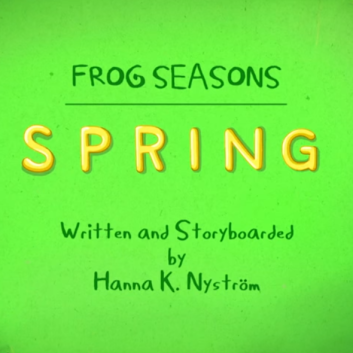 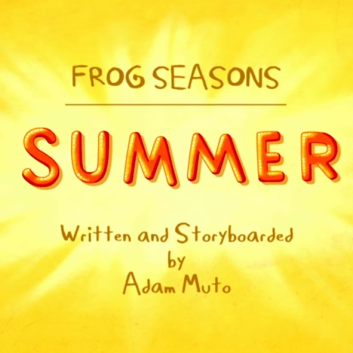 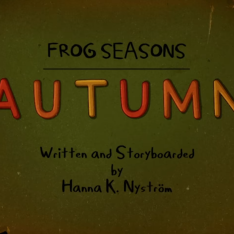 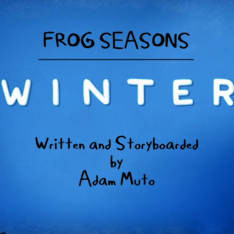 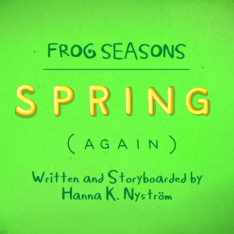 While I’m somewhat certain that Graybles Allsorts was always intended to be a series of shorts, Frog Seasons was intended to be a full-length episode in its inception. Not sure what change occurred to demote Frog Seasons to shorts status, and it’s not like the channel was advantaged or disadvantaged by this in any way. They just stuck these 3-minute shorts at the end of episodes during the “Regular Time Adventure Show” block (otherwise known as the “Adventure Time/Regular Show Purgatory Block”) that no kids even ended up watching anyway. So I dunno, it’s a mystery to me, not that it matters much. For the most part, Frog Seasons is a delightful array of shorts that’s kind of improvement over Graybles Allsorts, mainly due to the atmosphere that each minisode possesses. Interestingly enough, the plot for the Frog Seasons shorts is borrowed from the beginning of The Witch’s Garden, a moment that I initially had completely forgotten by the time these minisodes came out. 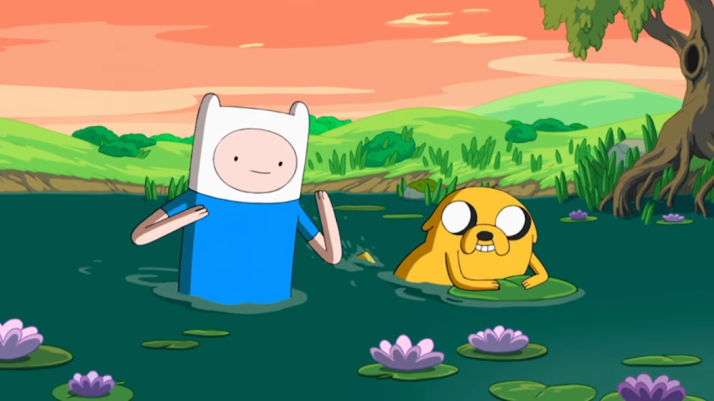 Frog Seasons: Spring is unique in being the one time (along with its sister minisode) that Breezy reappears. It’s delightful to see her once more, and I do enjoy how she and Finn are able to have a casual interaction with each other after everything that happened in Breezy. Not to say anything ended awfully between the two, but certainly… awkward. And it’s equally fitting that, in her one reappearance, Breezy breaks out yet another sexual innuendo. That girl’s got all levels of hypersexuality. Also loved how Jake rushes Finn as Breezy begins talking about pollinating. Good brother.

This minisode isn’t especially entertaining and suffers from being a bit slow-paced, though I really appreciate its laidback tone. The backdrops and skies in Spring look terrific and I love the brief moments where Finn and Jake are cheerfully swimming through the pond and engaging in small talk with each other. I’m a huge sucker for the Spring season as a whole, so the atmosphere in this one fills me with nothing but good vibes all around, and it also helps that this short initially aired in April. Made its presence feel even more appropriate. Though, like I said, it’s far from the most interesting of the shorts. When entering the frog’s kingdom, we’re treated to a very drawn out sequence with the frog inside of his room until Finn and Jake are finally kicked out. It’s a little slow, but I think the colors and atmosphere are more than enough to justify Spring‘s existence. 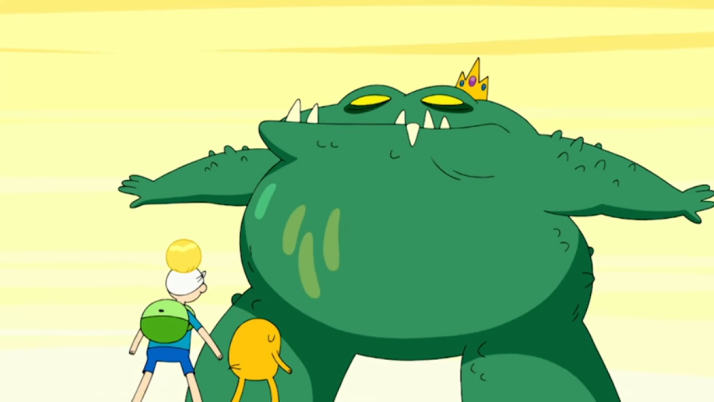 Definitely one of the funnier shorts. One thing I appreciate about Summer is how it plays with the boys’ personalities to its best abilities. I like how Finn is simply into following the frog around for the sake of his diehard curiosity, similar to how he doesn’t mind a boring dungeon crawl in Vault of Bones because he enrolls himself in activities that are strictly for the experience. Jake, on the other hand, isn’t into the idea of pseudo-mysticism and just wants to relax with the Water Nymphs, in what is arguably a more worthwhile experience overall. ‘Specially since Finn mentions wanting to get with babes.

Temperamental Jake is always a ton of fun to watch and Summer is no exception. I love the sudden shift in his attitude when the frog finally does put on the crown (in what is a pretty spectacularly animated sequence) and even in his state of frustration, I do enjoy how he sticks with Finn no matter what. Even though he does have the opportunity to ditch his bro to chill with Water Nymphs, he still stands by Finn’s side, and even ends up getting consumed by the frog because of it. But hey, at least it’s cooler in there, right? 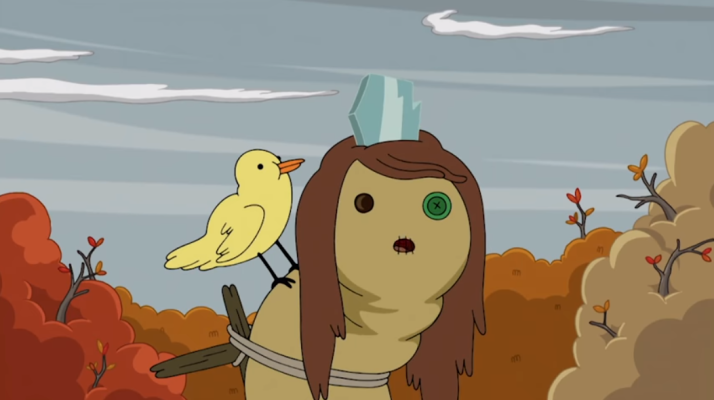 While I probably would’ve preferred Fall scenery akin to the paintings in Over the Garden Wall, I do appreciate Autumn‘s mid-November-ish approach to show a more colorless display, with wilted trees and muddy landscapes. I guess it’s technically more realistic to the season than the expectations we usually have for it. It’s definitely not complete eye candy for that reason, but I do dig parts of the story of this one. I truly sympathize with Raggedy Princess in Autumn; up to this point, Raggedy Princess was just sort of a gag character that other characters would shit on from time to time. This is her first real moment in the limelight, and I actually really get into her character. Her voice certainly isn’t the most pleasant, but it is sad to see that, even with her incredibly sweet demeanor, no one will stay to hear her poems that she clearly worked hard on. Even nice dudes like Finn and Jake don’t set the time aside from her. I think her character works great to emphasize those feels of isolation that typically set in this time of year.

The close of this one is alright, with Jake once again choosing his own route to go about the crown situation. The parts with RG were definitely a lot stronger… while the ending to this minisode kind of loses me. 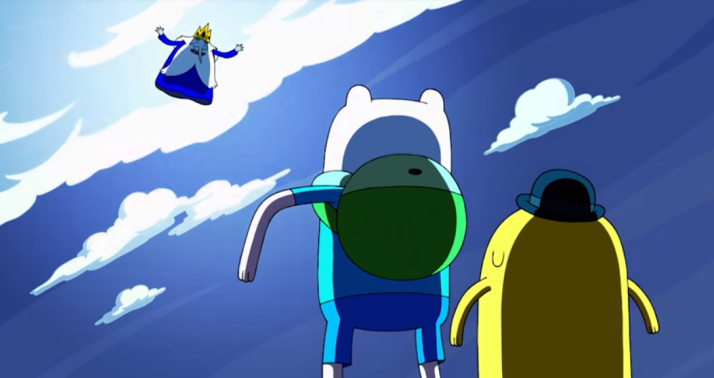 Right up there with Summer, Winter is pretty damn funny. Ice King, as always, is hilarious in his desperate efforts to hang out with Finn and Jake (he even calls back to when he used to hate them back in season one) as the boys are resistant as ever. Aside from how blatantly they ignore him, Winter also features Jake’s pretty hilarious walk cycle of how he simply bobs up and down the mountain as Ice King follows him.

This one is also kind of neat on an introspective level. I like how Jake mentions that “life is short.” In their endeavors following the frog, Finn and Jake have missed out on catching up with Breezy, hanging out with Water Nymphs, and even hearing Raggedy Princess’s dope poetry. It begs the question, is one potentially unfulfilling experience more important than three individual ones? Finn mentions that it’s important to finish what you start, but at what cost? If the result is truly disappointing, then is the experience really worth the trip? Finn ends up giving up on his journey but ultimately does miss out on a sweet experience when the Frog transforms into Life and clears the snow straight off of a mountain. I guess Winter is really poking at the idea that every journey has its pros and cons, and that there’s no guarantee things will ultimately work out with any one experience. It could ultimately be fulfilling, but it’s really all about whether the trip there is actually worth it. Good on Ice King, though. Even if he got dissed by his two bros, he still ended up having the best experience in the end. Hooray for underdogs! 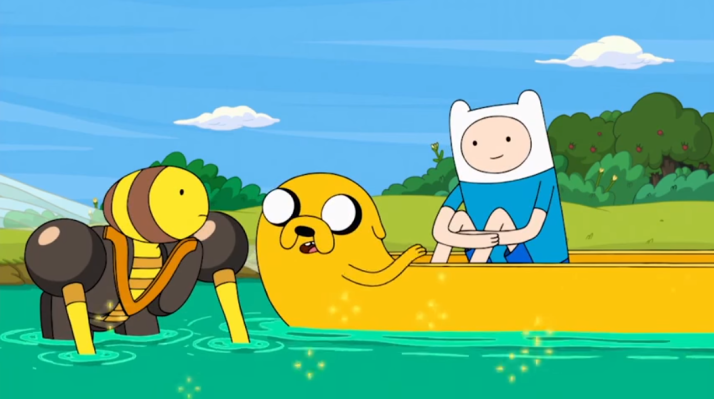 Spring (Again) easily feels like the most unnecessary addition to the Frog Seasons series. Aside from it lacking the nice visuals or the humor of the previous shorts, it also aired several months after the initial shorts did. Hell, I kind of didn’t even realize this one existed at first. I always thought the “(Again)” meant that they would be reairing Spring a second time on television.

Not really into the script of this one at all. Jeremy Shada doing his impression of LSP is always kind of cringe-worthy to me, and Breezy doesn’t really offer the same amount of charm and compassion that she did in the original Spring short. Honey Man’s dance is certainly cute, with nice musical accompaniment from Tim Kiefer, though it’s hardly as whimsical or beautiful as it was likely intended to be. I guess the real reason Spring (Again) exists is to tie into season seven’s main theme of how “everything stays, but it still changes” in the sense that Finn and Jake continue to follow the frog even after everything they’ve been through (I’m starting to think the frog does cause some sort of time paradox) but otherwise, I thought Winter did a fine job of wrapping of this series of minisodes.

Frog Seasons is definitely an improvement over Graybles Allsorts. Frog Seasons really works well with its visual elements, and I genuinely enjoy the idea of a series of interconnected shorts that really don’t have a consistent continuity between each other. It really adds to the anticipation of not knowing what will happen upon each segment. It’s interesting to see how each short differs according to its designated board artist; Adam Muto worked on Summer and Winter, while Hanna K. Nyström boarded Spring, Fall, and Spring (Again). Ultimately, I felt that Muto’s episodes were a bit weaker in the visual department (aside from some nice boarding efforts), but they were much funnier and more entertaining than Nyström’s overall. Nyström had the nice visuals and atmosphere, but her portions were a bit weighed down by their slow and somewhat dry pacing.

Favorite line: “Following frogs is like, one of my top 20 favorite pastimes.” (Frog Seasons: Winter)