Brief aside before we begin here: I’m starting up a podcast! Hosted by myself and my fellow pal _Comic_ from the AT subreddit, the Animation Ambiance Podcast will cover anything from the most relevant of topics in animation to some of the most obscure. We’ll definitely be discussing Adventure Time at one point or another, so if you’re interested in listening to the garbage box I call my voice, subscribe to our channel here!

The moment we’ve all been waiting for folks: Finn finally meets his birth mother in Helpers. It’s a moment that’s much less devastating than when he met his father, but all the more confusing, nonetheless. It’s pretty sad that Finn is never allowed a “normal” meeting with his relatives, though it is really nice to see him so ecstatic when faced with the chance to meet her in general. Like the past six episodes, Helpers succeeds through its execution of world-building, character interactions, and intense lore. Being the penultimate episode of Islands, Helpers essentially ties up all of the loose ends and curious questions we’ve had throughout the miniseries (and the series in general) and helps to build things up for its grand conclusion.

I’ve mentioned before that I only really get into Susan’s character when she’s able to work off of Finn (which, thankfully, is a majority of her appearances) and there’s a ton of great moments between them in the first few minutes. Even after just gaining her identity back after like, 16 years, Susan still devotes her time and energy into helping Finn fulfill his own quest and return him to his mother in the process. Granted, it’s a bit difficult for me to ignore that Susan is back to normal for the first time in over a decade and she barely even bats an eye about it, which is one of the very few potential  problems I have with Islands in general, but I still think it’s sweet regardless. Susan acts very sister-like to the little guy throughout the episode, and makes sure that he stays safe in what could be an otherwise dangerous place. I similarly love the pacing when Finn is briefly admiring his mother’s thoughts and her image. You can really get a sense for his own optimism in the realization that his mother might actually be a nice, caring person. Of course, this is mostly just speculation on Finn’s part, but it becomes much more rewarding when we discover that his instincts were precisely right.

We also finally get to explore Founder’s Island, which is a really neat location. I like how it’s clearly shown to be futuristic in the way humans dress and use technology, but for the most part, their actions are relatively down-to-earth and relatable in their humanity. There’s still bustling cities, street performers, and kids who skate and hang out together. While the other islands we visited previously got to show off their examples of dystopian futures, Founder’s Island is perfect location to reinforce that “everything stays, but it still changes” by taking us ahead 1,000 years into the future of humanity but still allowing the society to feel very human in the process. Also really dig the fun and geometric character designs of some of the humans. They look straight out of a Dr. Seuss book.

Jake hasn’t really had a ton to do over the course of this miniseries, and I’m sure he even caught onto that himself, because he is loving the attention that he receives from the humans in this episode. He’s truly hilarious and enjoyable in his performance; it’s very similar to the role that he played in Wheels, though this time, I don’t have to worry about the implication of Jake being a bad dad getting in my way of enjoying it. I especially love how much the humans eat up Jake’s act even when he isn’t being funny… does the flea circus joke actually make sense? I always found humor in how particularly unfunny and pointless it is. I really love how Jake also plays the part of the AT fanatic that believes that Finn must be a hero because of the person the gave birth to him. And I know it isn’t really profane or inappropriate in any context, but I still found it humorously shocking how Jake was able to use the word “placenta.” It’s like that season five episode of Samurai Jack where Scaramouche says “penis,” something just doesn’t feel quite right.

On the off side of things, Finn finally convenes with Minvera, or in this case, one of Minerva’s cyborg companions. It’s really cool to see how much Finn has matured since he met Martin. While his main goal was to just blurt out his identity and to find answers in his previous parental convening, Finn is very careful and precise in cushioning the possible blow for Minerva’s own sake. I’m not saying that he was wrong in his behavior before, as Finn does deserve answers. But it’s clear that he’s more empathetic and understanding of how this type of news can be confusing and hard to process for others as well, and he does so by making it clear that he isn’t trying to put Minnie on the spot. These moments are as nice as they are funny – I adore Finn’s question of “do you need help!?” after realizing that his mother may be in shock. Things quickly go awry when Jake is discovered to be a “mutant,” to which feels like a pretty logical reason for the humans to panic over. They’re essentially conditioned to fear this species, and after overcoming an excessively dangerous virus, the humans likely fear another potential “end” to their own species. 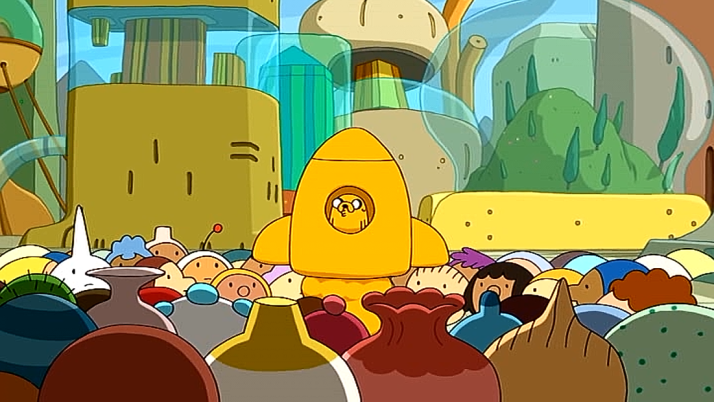 I also neglected to mention the very small C-plot involving Susan’s conflicted feelings on seeing Frieda again. It’s an arc that gets a lot more attention in the following episode, though it’s executed quite nicely here. I really like Susan’s sentiment of “my friend got hurt… I don’t know if I’m allowed back in her life.” It’s a very mature frame of mind that shows that even asking for an apology on its own may be invasive, because Susan was never given the proper permission or acceptance back into Frieda’s social circle. She’s betrayed her trust, and effectively chose to end their friendship in the process. Though, how in the fuck is Frieda still wearing the same exact clothes after 16 years? Does that chick ever change her wardrobe? On a side note, I super adore Susan and BMO bonding with each other. It’s a totally out-of-nowhere friendship that I really dig.

Returning to our main plot, the scene with the boys imprisoned is pretty tense. I’ve mentioned throughout the course of this miniseries that Jake has been nothing but supportive of Finn in fulfilling his own needs during this journey, but here, Jake is clearly reaching a breaking point. After an entire stressful expedition across the sea that has only led them into more questions than answers, Jake likely has had enough of putting his life and his brother’s on the line when it has only resulted in more issues for the both of them. That changes, however, in a body horror induced sequence where Finn and Jake’s bones are shut down and one of the Minerva bots discovers that Finn is her son. When the two finally convene (in screen format) it makes for the get together that Finn has presumably always wanted, although he isn’t reciprocating it as well as might one think. This, of course, comes from the fact that Minerva’s transformation from body to screen has left her essentially inhuman. There’s no clear evidence as to how much of Finn’s mother is truly in there, though that’s mostly left for the following episode to explore. What Finn wants in Helpers is answers, and that’s exactly what he gets through a bit of haunting exposition about the trials and tribulations surrounding Founder’s Island.

Minerva’s brief account of everything that happened is, like I said, quite wistful. It brings us up to date on everything we needed to know about the whereabouts of Susan and Dr. Gross, the steps taken after Finn’s disappearance, and the state of the humans and Minerva in general. Sharon Horgan, Minerva’s voice actor, does a terrific job of narrating in a hushed, yet passionate tone, and it’s only made better by Tim Kiefer’s terrific score to accompany it. The sequence also shows just how dedicated of a person Minerva is; even after going through the depressive reality that her once loving husband left with their son, she still remains tirelessly vigilant in ensuring that her people remain in good health, even if that means altering her own self in the process. While we learn a lot from this backstory, it also raises some interesting questions as well. Like, what happened 300 years prior that was “catastrophic”? I was originally under the belief that it might be referencing the implication that Rainicorns used to eat humans, but according to Everything Stays, such a concept had existed years and years prior and may or may not have died out by this point in time. To my knowledge, I don’t think it was connected to any certain event or piece of lore that we’ve been educated on thus far.

This episode closes with the brief implication that Minerva wants Finn to stay permanently on Founder’s Island, as we transition into the final episode of the miniseries. As a whole, Helpers effectively gets us up to date on pretty much everything we wanted to learn about throughout this miniseries and more. The final episode, The Light Cloud, exists primarily for the resolution of several different character interactions, though Helpers is mostly a resolve on the lore front. There’s so much packed into these 8 episodes that they could easily have spread these moments throughout the course of the series, but after watching Adventure Time for so long, this super condensed bomb of information is exactly what I wanted/needed. By episode seven of Islands, I was already feeling the most satisfied I had ever been with AT in general.

Favorite line: “I love you, but your mom’s a hundred robo-clones.”