Jake, despite being a magical shapeshifting dog that can transform into anything, is still very vulnerable when it comes to the topic of being injured and even the possibility of death. Jake’s aging process and cosmic destinies have been alluded to many, many times in the series, but The Limit poses a unique type of situation to put Jake through: a boundary to how far he is able to stretch. It not only brings that possibility to center stage, but it also showcases an extremely likable yet foolhardy side of Jake to put the needs of others before the needs of himself.

First of all, the episode starts off great. It’s just Finn and Jake gracefully watching stars and talking about aspirations while hanging at Hot Dog Princess’s house. I really love whenever episodes begin with the two main characters hanging out with any random tertiary character. It really makes the world of Ooo seem so big and yet so small in terms of social circles at the same time. The rest of the episode takes place on an effectively cool maze crawl. There’s no trademark dungeon episode during the course of the second season, but I’d say this episode comes to closest to having that old school D&D feel: rescuing others, trekking through a confusing maze, varieties of different monsters, a devious wishmaster, and the Ancient Psychic Tandem War Elephant, of course!

The main plot of the episode makes the journey seem a bit paper thin. It’s mostly just Jake testing how far he’s able to stretch with, of course, dire results. Of course, the episode is filled with fun, flashy dialogue, silly songs, great side characters (the hot dog knights are a perfect example of well-written “too dumb to function” characters) and some fun beast battles. I do wish that they could’ve gone a little more detailed with some of the creatures Finn and Jake stand off with. There’s so many neat looking monsters and demons just chilling in certain parts of the maze, so the fact that Finn and Jake end up just dealing with one rock monster and a group of scorpions is fairly disappointing.

The best part of the episode is surely the climax. Even though the creatures in the actual maze might not have been used to their advantage, Aquandrius is the kind of devious, slimy foe I’ve been wanting to see. He’s not necessarily unique in his motivations or intentions, but his design and name are just so inventive and mythological-feeling. In addition to that, the way Finn saves Jake feels a bit like a deus ex machina and relatively rushed, but I’m glad the show didn’t go the corny route of “Finn uses his last wish to save Jake, rather than what he wants.” It would’ve been sweet, but it’s a nice little subversion from what the viewing audience was expecting, and it certainly doesn’t make Finn seem unlikable either for thinking outside the box. Man, is Ancient Psychic Tandem War Elephant a great element to this episode too! Pen Ward mentioned that he worked a long time on the design of APTWE so people could eventually get tattoos of him on their body. It sure paid off too, Elly’s design feels like it’s straight out of ancient Buddhism. Also, I can’t believe that hot dog knight just brutally blew up on screen. At least he lives to see another day through the power of demonic magical wishes. 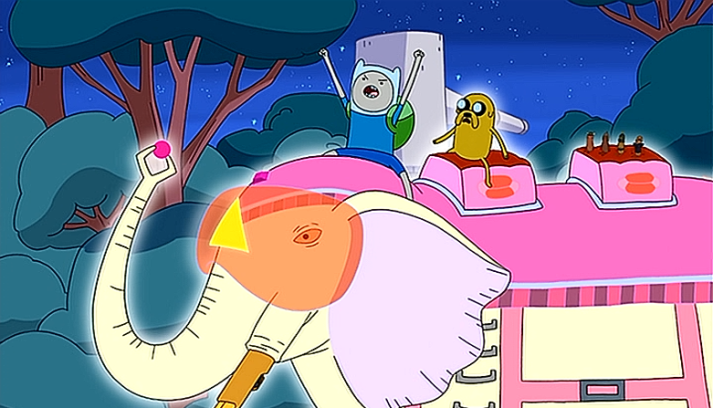 Jesse Moynihan mentions in the commentary that there’s a nice little anti-moral with what’s going on with Jake’s character study in this episode, but I wouldn’t really call it an anti-moral so much as an actual moral. On so many different occasions, people are encouraged to try their hardest and, if they push themselves hard enough, they will succeed. The Limit focuses more on the idea that there is such a thing as pushing yourself too far, and it’s good to know when to step back, analyze a situation, and decide what’s best and most rational for yourself and the safety of others. Jake’s true heroism unravels in this episode, but unlike Finn, Jake is a bit more stubborn and prideful when it comes to showing off his strengths and hiding his weaknesses. Jake rarely ever expresses his true struggles throughout the series, meaning he has enough faith in himself and the idea that everything will be okay to ever quit what he instinctively believes is right. If he’s learned anything in this episode, however, is that he does have a limit, and as the series will explore later on, he’s not quite as immortal as it seems. Also, he’d much rather just have a sandwich than save himself from perishing. And if that doesn’t sound like Jake the Dog, I don’t know what does.