Ignition Point is once again an episode that involves Flame Princess, yet does not put her at centerstage. I think at this point, I was yearning a bit for a more of an in depth look at FP as her own character, but, like Princess Bubblegum, that’s gonna take some time down the line. As for the episode itself, I think it starts off wonderfully, in the cutest and silliest AT-style representation of a young couple. The music is great as well, stripped from the You Made Me score. It’s somewhat disappointingly my favorite part of the episode, and while the main story contains some laughs, it never really delivers what could’ve been a pretty interesting journey that both Finn and FP could’ve went on.

It’s always enjoyable to visit the Fire Kingdom and its inhabitants, and we do get a bit of new information regarding how their people, as well as their government system as a whole, work. It’s intriguing to watch the people of the Fire Kingdom interact and work off of each other, because they’re pretty much exactly like the Candy People. Dimwitted, unusual, and seemingly harmless, the Fire People don’t seem to reflect Flame King’s statement that everyone in the Fire Kingdom is inherently evil by birth. I’ve never been as into the alignment system as I know y’all are, so I won’t get into too much detail about that, but I think it’s just very interesting on a lore-level. Flame King’s statement that everyone in the Fire Kingdom is evil is not completely false or unbelievable, as what we learn down the line about elementals is their inherent nature based on their specific element. As is, fire elementals generally are born with sinister feelings and emotional dissonance, though the less they are consumed by their own elemental nature, the more they’re able to form their own destiny and choose their own path. It’s an interesting look at identity among the people of the Fire Kingdom including Flame Princess and her dad, and definitely holds a lot to interpret among who FP is herself and how she can gain control of her own identity.

Sadly, I think a lot of that is squandered by a good chunk of meandering filler. There are definitely some enjoyable jokes to be had; I love the painting joke for the main reason that the Fire People are just inexplicably walking backwards for no reason. It looks really funny, and is one that I actually didn’t even notice the first couple times I saw this episode. As usual, I do enjoy a lot of the exchanges between Finn and Jake, namely in the scene where Jake neglects to catch Finn or when Jake accidentally insults Flame Princess. Though, this scene always has confused me. Why would Jake call, who is presumably both he and Finn’s grandma, “my grandma?” Finn has never once referred to Joshua and Margaret as “Jake’s dad and mom,” so why would their grandma be any different? It just seems like a strange bit of wording that makes it feel like discontinuity.

As I mentioned though, this is another one of Somvilay and Bert’s that just feels incredibly slow. There’s a lot of crawling through the vents of the Fire Kingdom and interacting with the surroundings that just don’t seem to add anything, and aren’t particularly funny either. I just feel like a lot of it is plodding through, when there’s tons of interesting turns this story could’ve taken. We honestly never really get to see Finn’s side of how he feels in regards to the information Flame King shared with him, and honestly, I really would’ve liked to see that. Later on, we only ever get to see Flame Princess’s inner turmoil with this information, but I feel like Finn, being the hero that he is, should’ve at least had a bit of contemplation in regards to this topic, instead of just glancing over it and barely interacting with the idea at all. I can’t blame this episode for Finn barely acknowledging it at all, but at the same time, I think Ignition Point could’ve benefitted from having a lot more meat. Again, not every single episode needs to be analytical and revolve around the deep inner turmoil between the characters, but the fact that the episode offers such an intriguing idea like that makes me disappointed it wasted those ideas on such subpar gags.

The Hamlet homage is certainly an interesting and fun bit (especially the “naked babies” portion), but again, I don’t feel like I’m watching anything that entertainingly satirical. AT is a series that typically doesn’t rely on pop cultural references in terms of its story or humor, so when it does, I’m not entirely into it or blown away. I think the concept of the Flame King’s nephews trying to usurp him still works as a plot device, but I don’t think the references are that significant or poetic on their own. 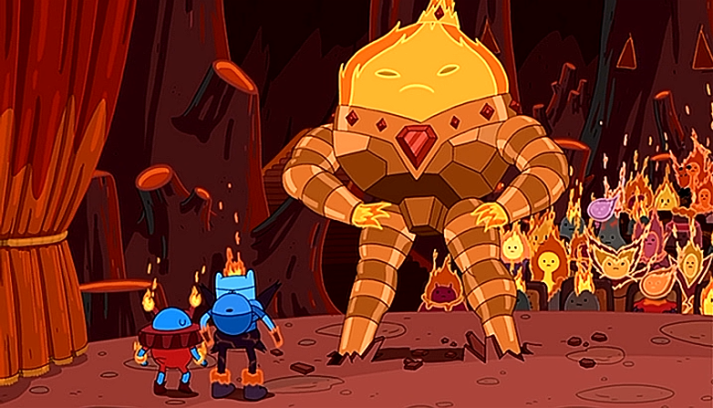 This is an episode Tom Herpich originally pitched at the writer’s retreat, and I really think it could’ve benefitted from having him behind the helms. Herpich was most interested in focusing on the corrupted government aspect of this episode, and if Princess Cookie and You Made Me are evidence of anything, he’s pretty damn skilled at writing these types of stories. Somvilay and Bert are more about focusing on the sillier aspects of the series (unless we’re talking about Princess Monster Wife) and it works here to a certain degree, but not in the most beneficial way in terms of story. I’m not sure if my bitching is warranted, because I’m discussing what the episode should’ve been instead of accepting it at a surface level, but honestly, there’s just not much that draws me into this one otherwise. I come back for some of the silly jokes and the interesting ideas you could draw from the environment of the Fire Kingdom, but the story is pretty drawn out and forgettable and I don’t feel like I’ve gained much at all from watching it that couldn’t be summed up by the last minute. It is always nice to see Flame King, though. That Keith David voice never wears on me.

It’s a shame that the concept of Flame Princess being inherently evil never comes into full fruition. It’s elaborated on a good deal in an enjoyable upcoming episode, but never really goes anywhere despite that. The most interesting piece of information on this topic actually comes from AT literature, which I will be exploring once this season commences.

Get ready for a double post next week, kids! In honor of the 100th episode (even though this technically was the 100th in airing order), I’ll being posting The Hard Easy and Reign of Gunthers on the same Friday. That way we’ll get to the real meat with I Remember You even faster.