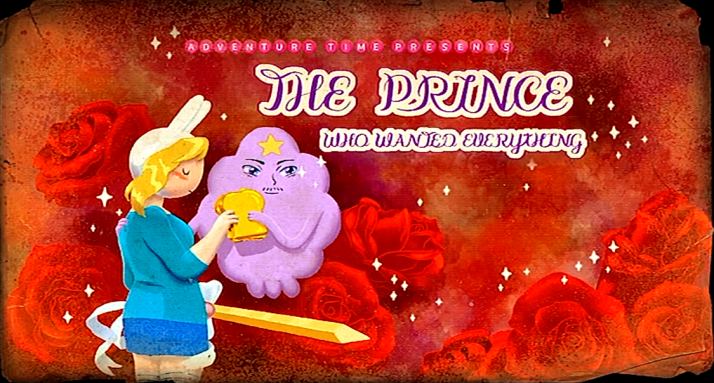 Blecch. The Prince Who Wanted Everything is the first stinker of the Fionna & Cake series, and a pretty blatant example of how these experimental episodes don’t really have much of a reason to keep being produced aside from a feeling of obligation based on fan reactions. The first was done strictly as a surreal passion project; I don’t think anyone on the AT crew knew how popular it would be, but as Fionna & Cake was met with practically universal praise, it only made sense for another F&C episode to be created. Two seasons later came Bad Little Boy, which was also well-received and a mostly solid outing, but kind of showcases the problem with Fionna and Cake episodes in general: the characters are basically carbon copies. Fionna has some interesting insecurities that were touched on in her first episode, but every episode that follows has her simply take on the role of Finn-Lite. She’s a good-hearted, laidback hero, and that’s about it. And the other characters, Gumball, Marshall Lee, Flame Prince, and so on are never given enough attention outside of their star episodes to actually have any selection of interesting character traits besides being slightly modified from their counterparts. Cake, on the other hand, is the only character who actually has a stand out presence in all of these entries, yet she’s often only given a small amount of screen time so the “Character of the Week” can hog all of the attention. And this episode’s star character is Lumpy Space Prince: a deeply unfunny gender-swapped version of Lumpy Space Princess that does absolutely nothing insightful or interesting, aside from being another chance to reinforce LSP’s vanity once more, as if that wasn’t already emphasized enough. Cut Rebecca Sugar – who was practically the mom of Fionna and Cake – out of the mix and you don’t really have a competent entry.

This episode notably starts up with Ice King tied up. Why is it notable? Because it’s freaking Ice King, you guys! We haven’t seen him in what feels like forever, and it’s a shame, because I feel as though he gets the least amount of screentime in season six. It makes sense, as this entire season mostly steps away from the main cast to delve into the lives of some of the lesser known citizens of Ooo, though Ice King doesn’t even get a fair chance to have an actual role in this episode. He’s simply a blank slate at the hands of his kidnapper, Lumpy Space Princess, and isn’t really given anything interesting to do aside from obliging to read LSP’s passion project. Could’ve been a much more enjoyable scenario if Ice King was argumentative about the way LSP wrote for his characters, or that he didn’t agree with where the story went, but he uncharacteristically goes along with it without saying a thing. Pretty lame.

The story itself poses an interesting concept, at least from my initial impressions. Lumpy Space Prince’s tale of running away from his parents and stumbling into Aaa (or Ooo… whatever is cannon at this point in time) could perhaps reference LSPrincess’s first experiences in Ooo and how she came across Finn and Jake, albeit highly exaggerated. Though, the way it’s executed is simply done in a way that we’ve seen so many times in other LSP episodes. Most of this episode just seems to retread the general idea that Gotcha! revolved around, which is that both Lumpy Space Princess and Prince misunderstand the type of people Finn/Fionna and Jake/Cake are and come to respect their simplicity and approaches to life by the end of the episode. The entire episode basically revolves around Lumpy Space Prince trying to understand how to live as a peasant but is constantly blindsided by his own pretentiousness. And God, how many times have we all seen the story of a rich snob who is enlightened by the simplicity of middle-class charm? It’s so overdone, and it isn’t carried out any more interestingly here. 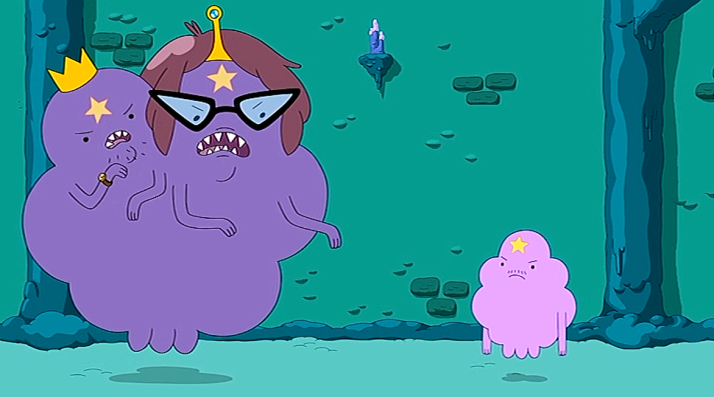 Lumpy Space Prince’s voice actor (at the Princess’s request, of course), Peter Serafinowicz, certainly boasts a competent performance, but again, I don’t think he’s really given much to work with. Lumpy Space Prince is at his funniest through his expressions; his anime influenced “Handsome Face” is pretty amusing, even if it is a bit overused by the episode’s end. Regardless, it provides for some welcomed diversity among the typically expressive dotted eyes in the AT world. But again, Lumpy Space Prince’s primary character trait is his vanity, and it simply isn’t fun or interesting to watch him. He also has the displeasure of singing one of the show’s worst songs, period. “That’s All I Need” has a pretty awful melody, terrible lyrics, and a less-than-satisfactory performance from Serafinowicz. Feel bad making such a superficial comment about his singing voice, but some actors are simply not meant for said performance. And if the song was actually catchy, funny, or added something to the plot, I could forgive it, yet it does none of those things. Aside from some cool cameos of characters we haven’t seen before in this universe (namely Magic Ma’am), it just feels like it’s there to take up time.

Fionna and Cake are simply in this episode to be observers. Cake has some funny one-liners, as she constantly breaks the fourth wall, but Fionna really just does not do ANYTHING. Aside from giving an unintentional piece of advice to Lumpy Space Prince, Fionna just stands there and occasionally has a line or two. Sad to see she’s given such a boring role after her emotive and passionate presence in the past two F&C episodes. The one cool thing is that she actually is using the Wish Star Sword that she acquired within the Fionna & Cake comic series. Pretty awesome to see that something in the comics was actually adapted into the series, and it’s pretty much just there as a subtle Easter egg for any readers of said series. Also, Fionna’s model got updated to where it seems as though she’s matured more in her stance and body weight, and it looks somewhat off-putting to me. I dunno, the more realistic her anatomy gets, the more awkward and stiff it looks when you pair it with her really simplistic dotted eyes and lack of nose. Just looks kind of wonky to me. 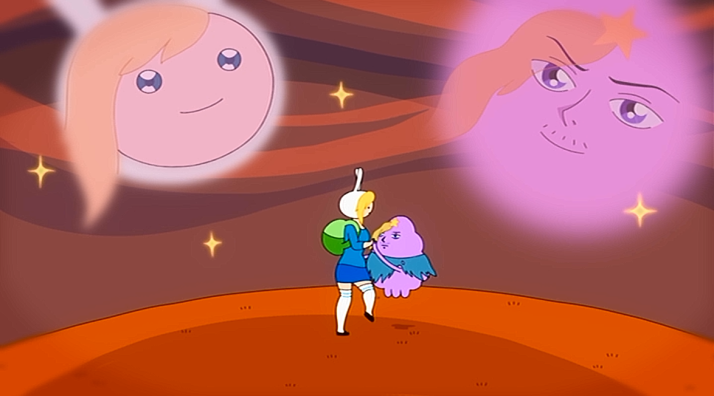 I guess the ending where Lumpy Space Prince discovers that his indifference to his parents’ disapproval of his behavior is a bit of an introspective moment for LSPrincess, but it only makes me wonder what the point an episode like The Monster has in the grand scheme of things if LSP never truly grows as a character. I understand if the writing staff just wanted to keep her stagnant in her developmental process and never learn or grow as all of the other main characters do, but if you have an episode like The Monster where it seems as though she actually DOES learn something, than the episode merely feels like discontinuity. I can understand if her decision to move back into the woods was based on her stubbornness and belief that she can make it on her own, but it seems as though she merely goes back to thinking her parents are monsters who simply want the worst for herself. Nice to see she’s embracing herself and her own behavior, but silly that she’d view her parents this way after realizing how much they care for her in the past.

And, as the story ends, the book reveals itself as a simple method for LSP to find a man who is exactly like her. Yes, Lumpy Space Princess loves herself and thinks she is the greatest person imaginable. We get it. LSP is at her best in episodes like Bad Timing or the upcoming Be Sweet, where her self-obsessed behavior is shown to be a mere facade that covers up her insanity based insecurities. Episodes like The Prince Who Wanted Everything feel like a rehash of everything we’ve already seen and know about the character. It’s like one of the lesser SpongeBob SquarePants episodes that focuses entirely on Mr. Krab’s absolute greed. We get that he’s greedy, it’s literally his archetype. We don’t need entire episodes centered around this one-note joke about a character’s personality. It makes them seem less two-dimensional and entirely more shallow. Lumpy Space Princess may perhaps be the most one-dimensional of the main cast, though she at least proves herself to be at her most interesting when her narcissism plays a role in her absolute mental instability, or the rare example where she’s actually able to benefit others through her repugnant attitude (such as the Elements miniseries). Yet, this episode doesn’t do justice to her character or the Fionna and Cake series in general. With a whopping four writers at the helm of this one, I’d expect more of a successful outing.