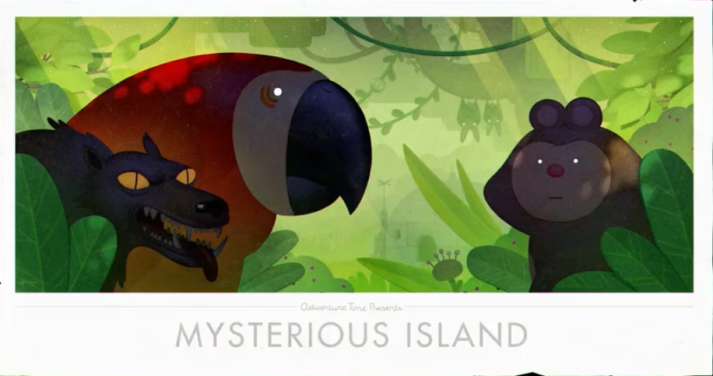 While The Invitation was mostly focused on its story and Whipple the Happy Dragon was focused on telling jokes and having fun, Mysterious Island is driven in creating an atmosphere, to which it succeeds at. We’re finally treated to our first island of the miniseries, and unlike the others that we eventually come across, this episode doesn’t really seek to make us understand what this island is about. We’re simply presented to a unique and unusual location that isn’t exactly rich with answers regarding its state of being, but are asked to enjoy it and get sucked into it regardless. And that’s exactly what happens. 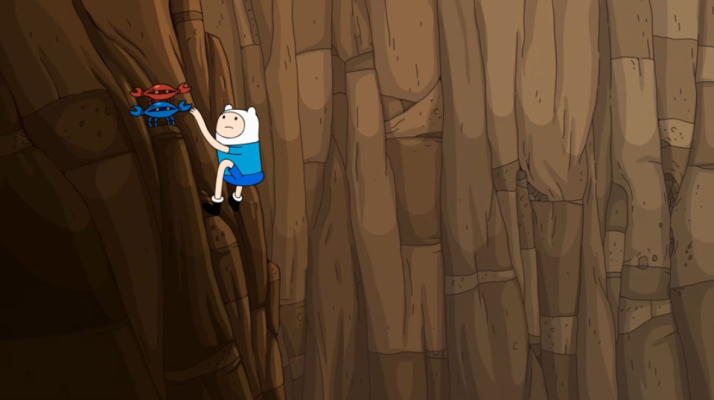 Mysterious Island features a lot more subdued, quieter moments than most of the other Islands episodes. While the other entries put exposition and emotion at the center (which by no means is an issue) this one takes its time and allows Finn to figure things out for himself. In a similar fashion to The Hall of Egress, the first half of the episode features Finn making observations out loud in reference to his surroundings. It feels even more like Egress considering that Tom Herpich boarded the first part of this episode, and he really excels with writing for Finn in his complete lonesome. I think it’s really nice, and is somewhat of a coping mechanism for Finn personally. He could allow himself to be completely stressed out about his friends being missing, but he instead chooses to allow the company of his own self to assist him through calmly looking for solutions. His observations are pretty humorous as well, along with his consistent comparisons to “everyday Susans.” In fact, Finn is kind of fucking harsh about Susan’s scent throughout the entirety of the episode, and it’s actually pretty funny. Our little guy is known to be judgmental at times, and let’s be honest, Susan probably NEVER bathes. And there’s the factor that he is looking for her, so it’s probably best that he describes her as in depth as possible. He even added in little stench marks when he drew her – THAT’S hilarious.

I really like the nature of the island in general. I’m always really into these concepts of areas that have a rapidly changing climate, as it feels like there’s so much ground to cover with different backgrounds, landscapes, etc. Upon being captured, I truly love Finn’s attitude towards being faced by a bear. As he mentions, he’s fought the Lich to space and back and has beaten plenty of other space gods… a bear is practically nothing by this point in time. He doesn’t even really antagonize the bear, which is great. Finn simply warns the animal that if he tries to mess with him, he’ll fight back, and that’s exactly what he does. Before the fight escalates, we’re introduced to Alva, the first human of the Islands bunch, and one of my favorites. 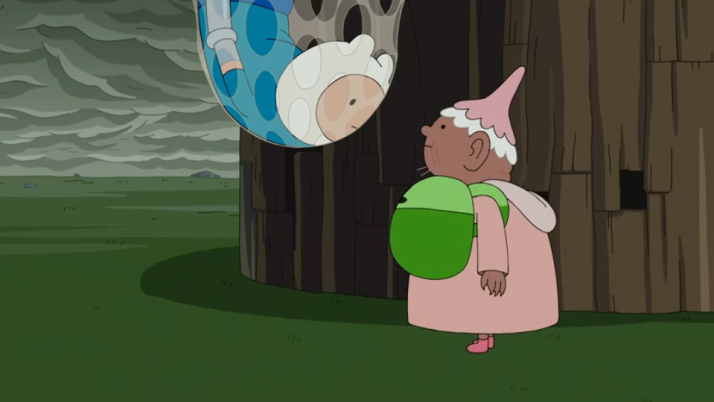 Alva doesn’t boast an especially strong personality, but her mysterious behavior, cute Yoda-ish design, and sweet demeanor is really what draws me into her character. Alva is also Swedish, and I always think it’s a ton of fun when AT utilizes characters of other nationalities and languages. Alva isn’t really a character you need to be constantly translating; unlike Lady, where occasionally she’ll drop a really cryptic line of dialogue, all of Alva’s lines can be easily explained through her behavior and attitude, or through Finn’s interpretations. Alva’s voice actor is Swedish herself, and I know I’m getting way off topic here, but holy shit, her VA is a straight-up babe! Aside from her looks (please read my blog and call me sometime), Helena Mattsson also does a splendid job at capturing the charm and mannerisms of an old lady while only being 34 herself. I enjoy the lengths that Mysterious Island takes to show how foreign this area is – the way Alva pokes holes into each one of her eggsack snacks before they begin to emit steam felt so real to this desolate, quiet land that Herpich and Wolfhard have created. It also felt very Miyazaki-like of the show to give Alva a giant bear as an animal partner. Albert’s pretty neat from his design alone, along with his goofy, cartoon-y facial features and clothing accessories. Come to think of it, every single animal on this island sports boots or shoes of some sort, and it’s another great element that adds to the bizarre mystery of the island. It’s kind of awesome to think that this little old lady is presumably the sole survivor of her entire species within this area of land, and it does seem reasonable enough, as we eventually discover her past history with technology and get to see how she’s on constant look out for trespassers to begin with.

The other aspect that makes this episode so great is Alva and Finn’s relationship. Again, they never even talk to each other, but I love how Finn uses it as an opportunity to observe this land and himself in the process. He even mentions previously identified aspects of his character, like how he isn’t really good at drawing aside from the occasional doodle. His drawing of Alva was legitimately terrible, but in a charming and sympathetic way, because you know the little guy at least put his heart into it. I also enjoy how Alva is very sweet, loving, and curious around Finn. She squeezes his face, reprimands him for playing with a sword, and snuggles up to him when watching the film of her fellow colleagues and humans. Finn is equally as curious around her, and I really appreciate how open he is to just going along with whatever weird endeavors she embarks on. Even after trapping him and squeezing his face, all Finn does is utter a “hi!” which I find to be adorable. I also like how, even after he realizes that she can’t understand him, he still continues to project out loud simply because there’s a lot going on in his mind and he enjoys her general company. Even if those thoughts are about crabs being a form of robot… oh Finn, you special boy. 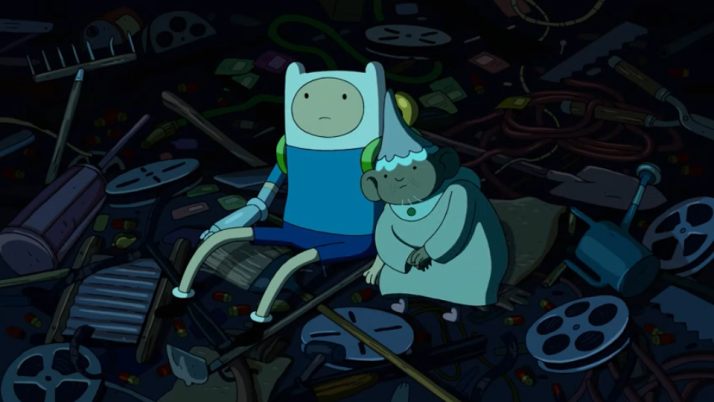 The film itself is really well-executed; another somber, silent scene that is pretty effective in showing one of the darker demises of humanity, even for this show’s standards. I know it’s silly that we’re watching a giant parrot wearing boots, but I’ll be damned if it isn’t just a bit chilling that the same exact parrot is shown to have killed someone in the film. This is emotional stuff, but Mysterious Island doesn’t really play it off in a big, dramatic way, to its strengths. I think there’s something much more haunting in the silence and darkness we’re offered. Additionally, it’s sweet that, even after having lost everyone, Alva still isn’t selfish when being face-to-face with the first human she has seen in a long time – she still wants to help him find en hund. If that wasn’t adorable enough, Alva and Finn end up swapping hats, which just charms the hell out of me. Their search pays off, as they do end up running into Jake, who’s less than enthused about the newcomers. Again, it’s nice to see that Jake just wants to keep Finn safe and could give less of a fuck about anyone else involved. He certainly isn’t going to share his portions with just anyone. The end of the episode ends as quietly as it starts, not with a giant conclusion to Alva’s story, but with a transition into the very next episode.

Mysterious Island never seeks to be big or groundbreaking, but just to be a quiet trip to showcase a portion of humanity. It’s cool and realistic to see that humanity is not limited to one segregated island, and, just like within Ooo, there are other humans still alive and roaming about the Earth, just in scarcity. Alva is the perfect specimen for this type of story, allowing us to spend time with her and to unravel her own tragic past along the way. But Alva’s draw isn’t that she’s a tragic character (though she is), but rather a curious, subdued figure that allows Finn to observe and draw conclusions for himself. Mysterious Island is just that: a mostly hushed expedition that put Finn at center stage, as he explores, inquires, and educates himself along the way. The only downside to Mysterious Island, in my humble opinion, is that not every joke works. The humor in Herpich and Wolfhard’s episodes can often be hit-or-miss, and I think there were one or two misses within this entry. I didn’t really find the repeated shots of Albert picking his nose and scratching his butt to be that funny, or the waaay played out use of Finn’s stock scream. Otherwise, Mysterious Island is pretty great in its atmospheric journey through one of the many mysteries of humanity’s demise. 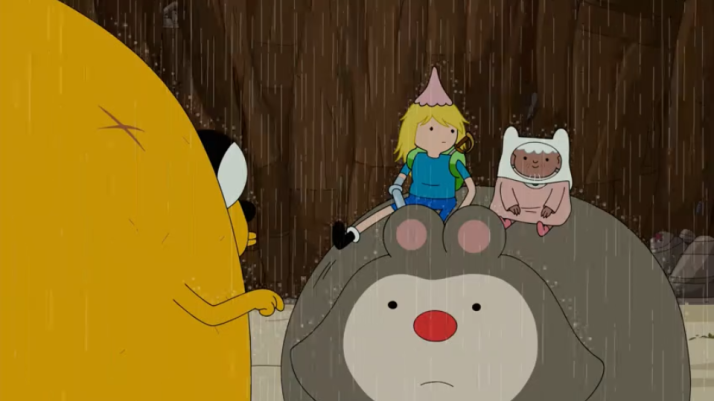 Favorite line: “Now I can look like an idiot while I freeze to death.”