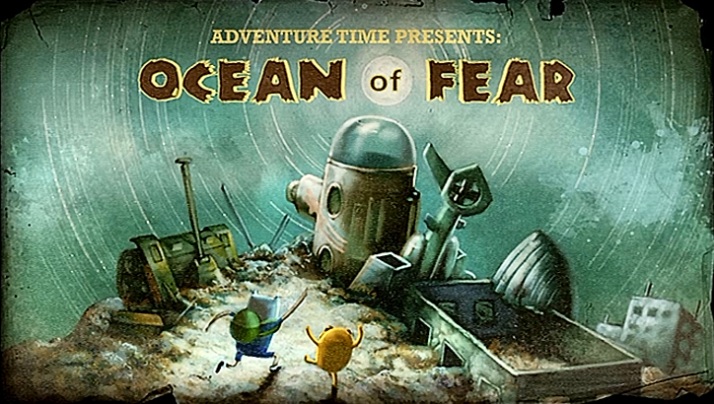 “In the dark recesses of the mind, a disease known as FEAR feasts upon the souls of those who cannot overcome its power…”

This quote, delivered by Clancy Brown, sets the mood for this slightly off-tone and delightfully character building episode. I mentioned in my review of “Memories of Boom Boom Mountain” that this episode did an especially good job of teaching Finn an important life lesson. That being that fears are an essential part of life and not something with expectations to be conquered or eliminated at any point in time.

Finn’s fear of the ocean is one of the most intriguing elements of his character. There’s a lot we don’t yet know about Finn, between the history of his past, the identity of his mother, his origin or where the hell he got that hat from. Most of these are likely to be answered in the upcoming miniseries, but Finn’s fear of the ocean raises much speculation. Could it be from the time Finn’s neglectful father brought him out to sea on a banana boat? Could it be a more deeply rooted reason that we haven’t yet been informed of? Whatever the reason, the show does a terrific job of making it seem convoluted yet entirely realistic at the same time. Finn acknowledges that his fear of the ocean doesn’t make a lick of sense since he isn’t afraid of lakes or ponds or anything even remotely related to the ocean, but aren’t most fears, by nature, irrational?

We’re also introduced to one of the first recurring villains in the show: the Fear Feaster. Mark Hamill had previously voiced the Dark Magician back in “The Enchiridion”, and while he uses similar inflections for the voice of the Fear Feaster, he does a terrific job of giving the character a menacing demeanor as well as a humorous one. In fact, this entire episode has somewhat of a menacing demeanor. The atmosphere is really creepy, including some underwater shots that give us some more brief glimpses of the effects of the apocalypse, with scatters of cars and trucks everywhere. It even goes into some really fucked up territory by showing the bodies of a dead family sitting on a couch. Yeesh.

It’s noteworthy that this episode was co-storyboarded by J.G. Quintel, the creator of “Regular Show”. You can really tell by the grotesque expressions of the characters that this episode wasn’t storyboarded by one of the show’s regulars, but they really help add to the unnerving presence. Some of the facial expressions even remind me of “The Marvelous Misadventures of Flapjack”, another series J.G. Quintel worked on.

Jake tries to be a supportive brother in order to help Finn conquer his fear, but exposing Finn to his fear doesn’t help at all and just leads to Jake getting his bread and butter all donked up. It’s somewhat of good commentary to also show that exposure to a fear doesn’t always cure the fear. In fact, it can often times exacerbate it, which is exactly what happens when Jake leads Finn to the bottom of the ocean and Finn freaks out, leaving Jake stranded below. This leads to one of the heavier moments of the episode, featuring a long, drawn-out scene of Finn unconsciously floating to the bottom of the ocean as it fades to black between each take. I don’t know what it is about “Adventure Time” and their common use of fading to black, but everytime its utilized, it really helps add a heavy atmosphere to the episode. It’s mostly used during quiet moments, which only increase their impact.

The Fear Feaster declares that Finn will never be a hero if he doesn’t conquer his fear of the ocean, but Three Wise Men arrive and declare that all heroes have flaws and that Finn is truly the greatest hero in all of Ooo. As I mentioned, this is a terrific lesson for Finn, not only as a hero, but also as a human being. There are so many kids’ shows I’ve seen that have done these types of episodes and almost always end with the character having faced their fear in some creative or elaborate way. I’m glad AT doesn’t go out of its way to eliminate Finn’s fear completely, but instead embrace it as a part of his character and a flaw within himself.

This is one of my favorite episodes of the first season, mostly because of the approach that the show took to flesh out Finn’s phobia, as well as focusing less on random humor and more on environment and atmosphere. I’m not sure if we’re ever going to get a direct answer to Finn’s fear of the ocean, but either way, this episode did a delightful job of proving that fears are a part of the human condition and not something to be repressed or vanquished.

“And so fear is forced deep within the soul of a hero. Conquered… at least, for now…”