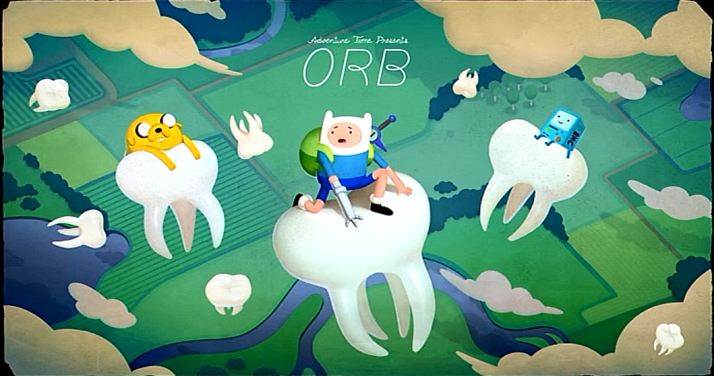 Adventure Time is no stranger to utilizing dream sequences in order to help flesh out certain stories. Whether it be cryptic prophecies (The New Frontier, Frost & Fire, and The Lich), signs of distress (Jermaine, Stakes, and I Am a Sword), self-realization (Crystals Have Power, Lemonhope, and The Visitor), or even just plain silliness (Burning Low), AT‘s dream fetish is pretty apparent. So much so that entire episodes have been dedicated to the concept of dreaming and the implications and hidden messages within those dreams. King Worm was the first, which I personally didn’t get into. It’s pacing was uncomfortably awkward, which made the general array of jokes and gags feel progressively weak in their execution. Another was Hoots, which had some interesting dream implications, but was more focused on character exploration that truthfully wasn’t that interesting. Then there’s Orb, which might be my favorite of the bunch. It’s not saying much because I wasn’t crazy about either of its predecessors, but Orb manages to be a pretty thoroughly entertaining entry that not only has improved timing for its more humorous moments, but also has a lot more to chew on from an analytical sense. 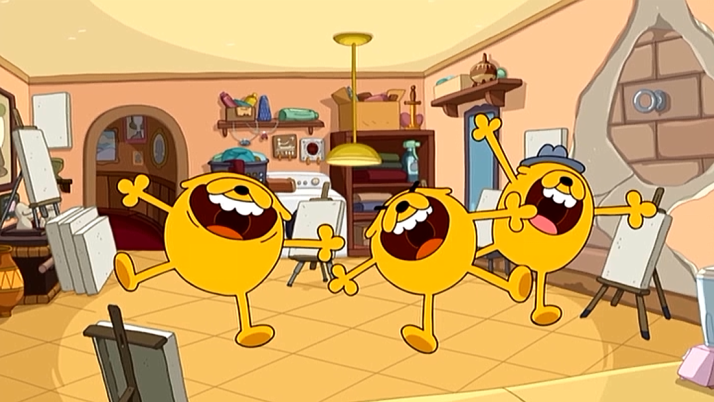 Being smack-dab between two miniseries, Orb is kind of a sweet spot for a post-Islands experience, as well as a pre-Elements experience. The events of this episode technically take place entirely on the boat returning to Ooo, and I think that’s pretty damn cool. For a show that managed to have its main characters be transformed back from being breakfast products entirely offscreen, it’s really cool to have this added transition that doesn’t even mention the events of Islands at all. It almost can be considered standalone for that matter. The goofiness of the boys in the first few minutes is much appreciated, and I love the overstock of bananas. It kind of reminds me of Football, which included an excessive amount of grapefruit for no clear reason.

Let’s take a deeper dive into the dream sequences, shall we? First off, Jake. It’s really nice to see Jermaine again, who has long been absent since his major debut two seasons earlier. I’m always surprised at how Tom Scharpling is able to distinguish Jermaine from Greg Universe without really even changing his voice at all. There’s simply a permanent sense of neurosis within Scharpling’s inflections that really help to make the character feel real every time he’s on screen. The main mission that Jake and Jermaine are given within the dream is a relatively unusual one; Joshua commands his two sons to dig a hole within the surface of their own kitchen. A lot of the fun of Orb comes from drawing conclusions throughout these ambiguous experiences, and I think there’s surely a lot to come from these few bits with Joshua. Digging a hole, within the realm of general dream meanings, signifies a sense of longing and searching for one’s purpose. I think this could be clearly represented through Jermaine ditching his old home to discover his own sense of self-actualization. On Jake’s side, it could be regarding his own curiosities of his magic nature, which was touched upon briefly two episodes earlier in Helpers. This is the definition meaning, but I have stronger implications and ideas from my own point-of-view.

Considering that their digging proves to be pointless after it is replaced by an untouched circle, I think this dream sequence more prominently represents Jake and Jermaine’s own anxieties about letting their father down. While Jermaine ends up leaving the dream sequence after it gets progressively more taxing, it’s easy to see how this could be an allusion to Jermaine’s own decision to let his father’s home burn to the ground after he decided it wasn’t worth his own mental turmoil. Jermaine even leaves through one of his paintings, of which he decided to get invested in only after he let go of parental burdens. Jake, on the other hand, decides to stay and finish out the job, as he becomes progressively older and more burnt out throughout his experience (and also due to his encounter with his worst fear, The Moon). Jake and Joshua’s relationship is probably the most fascinating out of all of the Dog children. We know that Joshua had high expectations for Finn to be a strong and cunning warrior, while he wanted Jermaine to be the responsible type that would look after his own possessions. Joshua was likely the most fond of Jake, considering that Jake came from his own body, but we never really are given information regarding what expectations Joshua had for his most carefree son. Perhaps, it’s even an expectation that only Jake ruminates on himself. Perhaps it has to due with the fact that, while he was put in charge of taking after Finn, Jake is getting rapidly older day-by-day and isn’t sure how much longer he’ll be able to do so. Or, it could represent his inability to follow in Joshua’s footsteps for being the great father that he always wanted to be. There’s a lot of different concepts to chew on, but I honestly believe the Finn one is the most intriguing. They’re both getting older, but even then, I think that Jake still feels as though he needs to watch over Finn. It’s mostly an overprotective parent fear, but I get the feeling Jake worries that, if he isn’t around anymore, who will take care of his brother of whom he loves so dearly? There’s also the obvious implications of foreshadowing as well, that are triggered when we do see the Peeper, of whom briefly appears in the window. I’ve rambled a lot, but Jake’s dream is definitely the mostly expansive and interesting out of the three.

Finn’s is much shorter and more concise, but still relatively interesting. It is interesting to note that Finn has both of his arms within the dream sequence, which probably could imply a sense of longing, but I kind of get the feeling that parts of his subconscious haven’t even fully recognized the bionic arm yet. In general, Finn seems to accept it and use it as if it were his old arm, so maybe he just doesn’t really even recognize the difference anymore to the point where he feels whole. A lot of people took note of this being sad and tragic, but I don’t think it’s meant to be taken in a negative connotation. After all, Finn is seen to be flying throughout his dream sequence, denoting his feeling of free will in his choices, presumably after he chose to do what was right for himself after the events of Islands. However, it appears he still has some possibilities for anxiety and regret. When being faced with PB, he’s unable to fly and is held down by strands of grass. This felt like a statement in addressing Finn’s ties to Ooo as a whole. While Finn arguably made his own decision to go back home, I get the feeling that he also feels that he needs to go back home, or else terrible things will befall the people he loves and cares for. This is also represented by PB’s loss of teeth, a popular stress dream that implies a feeling of powerlessness in one’s surrounding. While Finn feels free and happy after his own self-journey, he possibly feels more out of control than ever when it comes to the safety of his other friends of whom he cares for.

BMO’s dream is probably the simplest to get behind, but in an enjoyable way. It really feels like a childlike nightmare, in which the circumstances aren’t truly textbook levels of horrific, but still psychologically damaging from the perspective of a child. The play that BMO puts on revolves around the theme of Finn and Jake being sad and lonely when he is not around, showing that BMO does feel cared for and needed by his best friends, albeit in a slightly egocentric way. Love how BMO is under the somewhat selfish impression that Finn and Jake’s lives just completely suck without him, but again, it’s very childlike in that regard. Things take a turn, however, when AMO returns to the scene and hurts both Finn and Jake in the process. AMO is still referred to as “BMO”, which shows that BMO may still fear what lies inside of him in the sense that he may end up becoming bad, just like his sibling. In the same vein, BMO fears AMO becoming the “director” in the same way that he fears his programming for dictating his entire life path.

It’s to be expected that any dream episode will have some form of foreshadowing, namely Jake’s aging and the appearance of his biological parent, Ooo being element-ified, the Nightmare Sword, as well as the appearance of the Lich-faced AMO, possibly addressing that the Lich is still around and still very powerful. This episode is stellar for all of its attempts at mysticism and hidden details, but it’s also very funny as well. Aside from the often nonsensical dialogue, of which Orb is chock full of (namely in the beginning sitcom sequence with Jake and family), this is a great episode for visual gags. Not only do the facial expressions and the general anatomy of characters distort themselves at the turn of a dime, but the camera angles and the way characters interact with their environments are also played with for comedic effect. I love the random, almost pointless extreme close-ups within Jake and BMO’s dreams, as well as how Finn shuffles to the top of a hill without taking general perception into consideration. The backgrounds within Orb are similarly delightful, with something as simple as the red curtain on BMO’s stage looking exceptionally stunning with proper lighting and use of color. 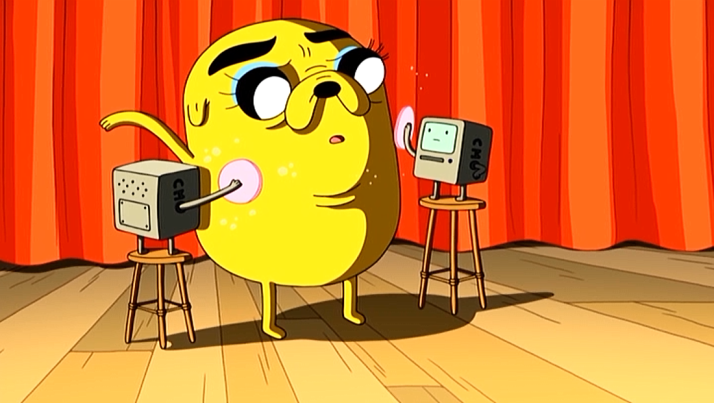 Orb also marks the debut of Nightmare Princess, of whom actually debuted in the game Secret of the Nameless Kingdom. Though, that Nightmare Princess was a completely different character than the one we see here. I get the feeling that the staff just really enjoyed this concept, and wanted to include this character in several steps along the way, but never did until now. As is, she has a pretty rad design. Of course, there’s not much of a character there, but it is in typical Adventure Time fashion that a character as menacing as herself would want something as trivial as a banana. The dimension she brings Finn and Jake to is similarly awesome, which ends up playing a part in the eventual debut of the nightmare induced Ooo. If I was to pinpoint one problem with this episode, it would be that the gag ending feels like the experience was kind of pointless and only existed to move the story along by providing Finn with the nightmare juice. It’s a silly conclusion, but it might be a little too silly for its own good. Like… what does Nightmare Princess even want with their bananas? Perhaps its ambiguity is what adds to the punchline, but it just isn’t really that shocking or even that funny. The ride to get to this conclusion was certainly fun, but the conclusion itself feels a bit lacking and meaningless.

Regardless, I dig Orb. It’s a fun and enjoyable exploration of our three main boys, with better comedic timing and more intriguing implications along the way. This was the only real break I get from the miniseries side of things, and while it was nice to cover a one-off for a change, I am excited to tackle the balls-to-the-wall nature of Elements, another one of AT‘s most grand and ambitious efforts to date!