A brief update before I start this guys, this will be the last week for semi-daily reviews. I return to college for my junior year this upcoming weekend, and I just simply won’t be able to commit to this blog full-time for the time being. You can all still expect one or two reviews per week (hopefully), but attempting to do four a week like I have been would just be impossible. This blog is still a big passion project for me and I plan on finishing it till the very end, so I appreciate the patience of anyone who is reading. I still love revisiting these episodes of my very favorite show, so you can guarantee yourself that I’m involved with this project for the long-run! Without further ado, Princess Cookie. 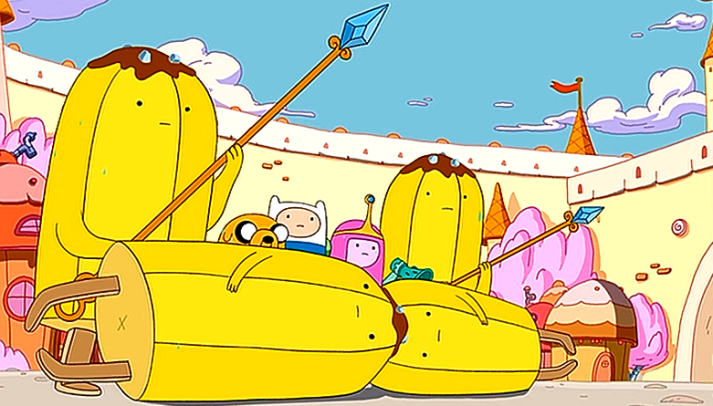 Crime and danger within the Candy Kingdom has been handled in very silly and comedic ways in the past. Susan Strong is a prime example of PB not giving a shit when it comes to possible threats to her kingdom that she doesn’t necessarily see as threats. However, like we saw in Goliad, PB’s feelings of unease and vulnerability once the Lich was unleashed certainly made her more aware of the possible dangers around her. Which is why in Princess Cookie, the situation is handled with a higher sense of concern and direness, as shown by the extended levels of Candy Kingdom military units. It makes the entire conflict of the episode seem much more intense and concerning than it really is, and alludes quite eerily to an actual hostage situation.

The character of Baby Snaps, and his connection to PB, is quite interesting to me. I think Baby Snaps as a character is sympathetic, though very clearly insane. His interaction with PB as a child is both tragic and somewhat hilarious, and that’s a pretty accurate summary for the character as a whole. I really enjoy how passionately he views his own desires and goals, yet, he always puts them in such a sincere and genuine way that his tone and inflections still come off as rather humorous to me. Tom Herpich and Pen Ward repeatedly mention in the commentary for this episode that they wanted Donald Faison, the voice of Princess Cookie, to play his lines completely seriously without even remotely trying to be goofy, and I think it really works on both a serious and amusing account. We take the character of Baby Snaps seriously, but also are able to laugh and how he personally takes everything so seriously himself. It’s a load of hammy tragicomedy packed into one single cartoon character that I think they pulled off exceedingly well for the type of story they wanted to tell.

Back to the actual flashback sequence, which highlights the very dangerous element of what could potentially traumatize a child. Again, it’s a bit of a silly example, but it still accurately portrays the very devastating psychological effects one can have on a child from simply not taking them seriously or pandering down to them. Obviously we know PB wasn’t intentionally trying to hurt Baby Snaps’ feelings or even directly laugh in his face, but it still had a giant impact on the poor little cookie man that led him to serious corruption and mental instability. It’s very sad to see that an instance that Bubblegum likely doesn’t even remember happening led to the mental deterioration of one of her own citizens, and changed a relatively normal, loving child for the worse. There’s two other noteworthy things about this scene: 1. For a while, this scene was pretty confusing because it’s one of the first instances we see into Princess Bubblegum’s actual age. I thought it was originally an error that PB was older while Baby Snaps was a child, or that Baby Snaps grew rapidly over the course of a couple months or so, but now it’s evident why Princess Bubblegum seems relatively unaltered by time. 2. Why exactly did PB laugh at Baby Snaps? I mean, it seems pretty obvious, right? She laughed because Baby Snaps is a boy, and a very young boy at that, and a princess is typically defined as a feminine role of power in a family monarch. Well, in the Land of Ooo, apparently anyone of any gender can be a princess. It’s basically like being president, I guess. We see this with the King of Ooo later on, who is elected princess by people who don’t even seem to bat an eye at the fact that he’s a man. Not even PB. So, was she instead laughing because he was a child? I dunno, I’m just willing to assume it’s a part of the show that wasn’t really thought out ahead of time and now only slightly feels like a bit of discontinuity. That, or you could look at it the way I just mentioned, which seems a bit too condescending for PB to do to a young lad.

The connection with Jake and Baby Snaps is extremely heartwarming and likable. I think Jake’s moral ambiguity is arguably highly in question here, as he’s blatantly going against the law to help a criminal in what I’d called Stockholm syndrome in any other situation, but he’s clearly doing it because he does see the large aspect of tragedy within Baby Snaps character, and perhaps even a bit of himself. Jake didn’t have the cleanest past either, so he most likely see’s all the things that Baby Snaps could be if he left behind his criminal actions and started anew. I think it’s a very compelling depiction of Jake’s character; we’re used to seeing him just kind of go along with Finn and PB’s deeds, but here, he completely goes against both of them and does what he believes is the right path for everyone. Again, it’s hard to argue whether this is a great moral choice or not, but I don’t think the staff was really trying to push this off as a great message. Just that Jake was trying to help someone in need in his own unique way that would potentially lead to success from all sides of the party. The most fascinating concept behind this is that Finn is actually against Jake’s decision. Yeah, Jake willingly abandons Finn after he doesn’t agree with his decision, and while it’s sad to see the brothers at odds, it’s also quite nice to see them have a completely different perspective of the situation that makes sense for both parties. Finn’s all about doing things the conventional and lawful way, while Jake seems to base things on a more emotional level when it comes to bad or good.

The scene with Baby Snaps’ monologue before he falls back into the canyon is both really heavy, and again, pretty funny. I know a lot of people see this as a straight-up tearjerker scene, but again, it’s riddled with lines that seem so cliche that I almost doubt the dialogue was meant to be taken so seriously. I still appreciate the sentiment Baby Snaps left for Jake before his seemingly final blow, only it fails because I guess Candy People are pretty incapable of committing suicide. Luckily enough, Baby Snaps is able to receive the potential help he needs, while also ruling over the Grasslands as a newly elected ruler. It’s a beautifully crafted grand climax that just makes for a delightful ending, as we’re able to see both the consequences for Baby Snaps’ actions, and the positive future that he may hold. All hail Princess Cookie! In fact, I may take back my previous complaint about male citizens being able to be elected princesses. Perhaps Baby Snaps was the first male princess in all of Ooo, which ushered in a new era of men who wanted in on the princess action as well. What an interesting subvert that would be!

This episode’s riddled with funny moments, along with the bits I mentioned above about Baby Snaps in general, and a special highlight going towards Finn acting as Jake’s shadow. It’s such a bizarre and ridiculous idea that would almost make no sense on paper, but it’s executed in an especially clever and hilarious way that it never ceases to amaze me. There’s zany lines of dialogue, as always, including the widespread favorite “Alvin’s hot juicebox,” which I still have no idea what the intention behind that one was. There’s also a lot of great callbacks, from the cameo of Goliad and Stormo locked in psychic combat in the background to the return of the Baby Whoozlefut & the Wuttlebugs book, as well as PB learning a thing or two from Ice King by trying to sway Baby Snaps with a poo-brained horse. Also, poor Jake just wants to be a mailman. Is there a specific detail of Jake that makes him incapable of being a mailman? Is it the fact that dogs are portrayed as anti-mailmen? You shouldn’t assume those things of Jake. Racist! 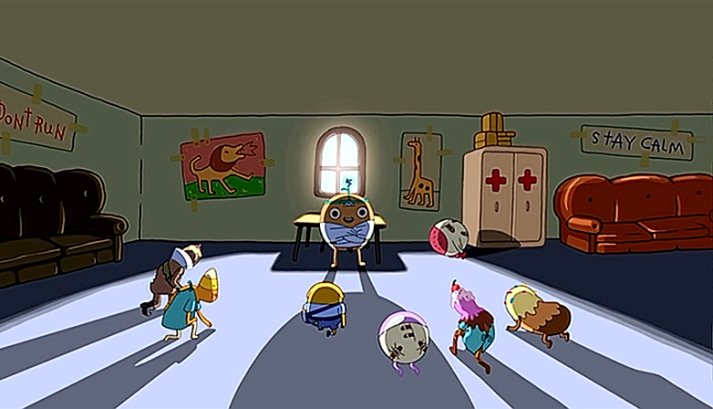 If there’s one overall criticism I have for this one, the drawings are a bit wonky. It looks like Herpich worked on a good majority of this one, and his boarding and general designs of the characters usually look great, but there’s something that feels off. Finn’s face is really stretched out to the point where it looks like an oval, and the general size of the characters look distorted in some scenes. There’s a bit at the beginning and towards the middle where the Banana Guards look GIGANTIC, they’re seriously taking up like, half the screen. There’s also a couple of other errors, such as the chip who is supposedly doing a double jump in the air (though this may have been an error on the animation department, Herpich mentions it didn’t translate as well as he wanted it to) and a couple brief continuity errors, such as the many times PB changes the position of her arms while holding Baby Snaps as a child.

Besides that, I think this one’s great. Lots of intense moments with an overall sweet side, that elaborates on more character studies between Jake and PB, as well as a brand new character central to the story. It’s one that hits all the right feelings of raw emotionality as well as fun and endearing, while still covering a very satisfying story in the course of 11 minutes.

Favorite line: “It’s funny, but you sort of remind me of a mailman I used to know.”