Gunter has continually been shown as somewhat of an enigma up to this point. There’s been hints and foreshadowing of his inner darker side, most recently in King Worm, and this episode has as much fun as possible with how fucked up, while still incredibly cute and cuddly, the wide-eyed penguin is.

It kinda goes without saying for this one that it’s somewhat all over the place. It’s essentially three different stories combined that don’t really blend together in a completely cohesive way. One is about, as the title states, a reign of Gunters attacking the Candy Kingdom. Another is about Finn’s impressionable status as a teenage that leads him heading in the direction of douchebaggery, while the third regards Ice King discovering the secret Wizard society. So yeah, none of these really have any connection at all, besides IK’s initial motivation towards heading into Wizard City, but I have to say, they are all pretty fun on their own. The battle of the Gunters provides for a lot of fun action and laughs, the detour into Finn’s adolescence reminds us that he is still in the early stages of his teenage years, and is prone to many changes in hormones, behavior, and identity when it comes to how he regards himself and his loved ones. The Ice King B-plot, while the weakest of the three, sets up a future endeavor regarding the secretive nature of Wizard City that will eventually have a bigger effect on the IK than he could ever imagine.

I guess it’s really only appropriate to talk about these stories in sequence. The initial plot begins with practically no set up, as the immediate first frame is Ice King shouting “Where the turds is my de-mon-ic wishing eye!?” It’s a very humorous beginning to emphasize the somewhat scattershot story we’re in store for, and really showcases the hilarity behind Ice King and Gunter’s father-son relationship. And by God, do I even need to bring up Ice King’s search history? Honestly, there’s very few times I’ve laughed as hard and long as I did at these freeze frame bonuses, so I almost feel obligated to include them as visual pieces. 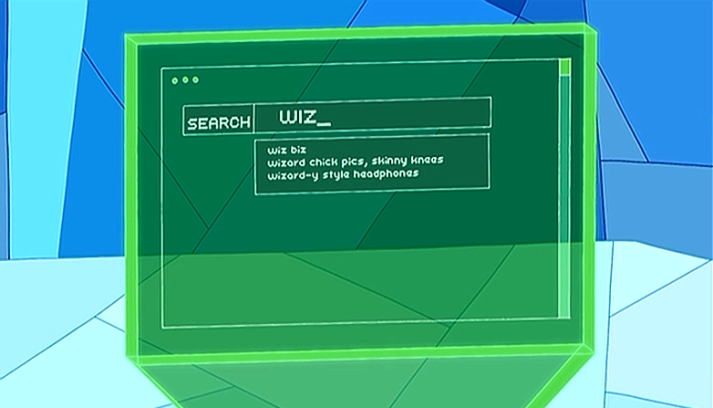 My personal favorites are “wizard chick pics, skinny knees” and “wiping my bum isn’t working right.” It feels less like an opportunity to get shit through the censors and just feels like something natural that you’d find when using Ice King’s search engine. I don’t even wanna know what other dirty secrets lie on that monitor.

It’s a bit of an interesting depiction for Gunter as well. I think we’re supposed to sympathize with him, but at the same time, we don’t really know what’s up with him. Does he just want love and affection? Or something much more than that? Whatever it is, it causes him to engage in complete fits of rage and doom, which leads to an eventual invasion into the Candy Kingdom. This is home to some really great interactions between Jake, PB, and Finn. They all work off of each other so well, once again showcasing PB’s somewhat goofier side (love how she just stops caring halfway through and plans on building bottles forever, I feel like she just didn’t have the effort or energy to put her time into actually defeating an army of penguins). Some terrific playful voicework by John DiMaggio in this one, where Jake doesn’t really have many funny lines on his own, but it’s one of those episodes where just the tone of DiMaggio’s delivery is enough to get a laugh out of me. And then there’s Finn, who is so confident in his own secret plans that he doesn’t really think through whether or not they’ll work out. It really is just a terrific showcase of these three distinct personalities, allowing their goofier, as well as their more prideful sides come out in full force. It’s also just an endearing hangout experience for them. From PB’s reaction, I think she sees this as a more opportune time to hangout with her boys than immediately get up in arms and weapons-heavy in regard to the Gunter invasion. She probably knows she can handle it, but would much rather just take it easy and do something silly with her close friends, which is why she acknowledges that her plan is awful. The stakes actually do feel pretty high during this one, despite the fact that, once again, we’re dealing with an army of Gunters. The scene with Gunter nearly cracking the Gumball Guardian is definitely wince-worthy, and actually somewhat had me concerned on where it was going next. Of course, the episode does ends with Ice King giving Gunter the “squirty-squirts” so any sinister motivations from Gunter just come off as mere “teen angst”… for now, at least.

About halfway through the episode revolves around Finn’s excerpt about how he wants to be more secretive towards women in case anything with Flame Princess ends up failing. It makes sense that Finn would want to be more educated on how to handle relationships since he’s in his first committed one with FP, and makes even more sense that he wouldn’t want to go into another spiraling depression that’s equivalent to what he went through with Bubblegum. Of course, it makes Finn look more like a jackass that he’s subtly manipulating people for his own gain, but it’s a terrific segue into his eventual fuck-ups that are based off of hormonal needs and the teenage male perspective. I was never bothered by this side of Finn because I felt it was an honest, realistic, and interesting portrayal of his character that went beyond just simply portraying him as a stand-up kid with no moral issues. It’s an intriguing step up from what we’ve already seen from the innocent little guy, and even more interesting that he looks to outside media for advice regarding how to handle girls, something I think most teenage boys are also guilty of. This, in return, introduces us to Jay T. Doggzone, and I swear to God, if we don’t find out who the identity of this author is before the end of the series, I’m gonna be hella pissed. Jay T. Doggzone was a recurring element added in that continued appearing through the end of Season Four towards the end of Season Five, and it’s constantly implied that he’s Jake, yet never openly revealed. I feel as though the staff may have just scrapped following up on this idea, which I don’t really mind not knowing, but I feel like they added so much God damn build-up already towards the identity behind this character that it keeps me up at night wondering who this guy is. Is it Jake’s secret alter-ego? Why does Jake write “trash books” in secret? Who are you Jay T. Doggzone!? Honestly, the finale could leave me with as many open questions as possible, as long as I find out who this fucking author is, I can die in peace.

Ice King’s B-plot isn’t especially lengthy, but it does introduce us to Wizard City for the first time: a totally rad landscape where some choice wizards hangout. It’s also the first speaking appearance of Huntress Wizard, that I know Jesse Moynihan in particular was probably really, really hype about. Moynihan had already tried to incorporate Huntress Wizard into his AT episodes a couple of times, and this was the first successful pitch (aside from her non-speaking cameo in Wizard Battle). She’s good fun to watch; snarky, mysterious, and well-designed, her presence is always welcomed, especially when her personality battles Ice King’s. But IK doesn’t mind, since his Jay T. motherfucking Doggzone book told him otherwise. The secret society of wizards kickstarts that cool recurring story arc, and is definitely the biggest and most interesting takeaway from this episode. I didn’t really know what to expect from this combination of unique wizards, and felt that there were a ton of possibilities that could come from it, especially in regards to the division from Wizard-culture and Ooo-culture. And it’s a small moment towards the end, but I really enjoy Finn’s notable sympathy for Ice King and his physical injuries. They could’ve easily just pinned the entire Gunter incident on the IK, but I enjoy how Finn especially is more concerned with his well-being than why he wasn’t keeping a better eye on his pet penguin.

I kinda went into this one feeling divided because of its scattershot nature, but I actually have to say that I do enjoy this one. Sure, the set pieces never really flow well together, but I still think it’s thoroughly enjoyable and fun all the way through, no matter what its focus is. It never feels so incoherent that it’s distracting, and still keeps my attention regardless. You could definitely argue that it’s unfocused, but take an episode like Ignition Point that’s a complete snore-fest, despite it’s solid main story. Reign of Gunters may not be the most cohesive episode, but it’s certainly a lot of fun. Great character interactions, jokes, lore, and a wildly silly conflict, everything that Adventure Time does right in one, flimsy package.