Sad Face is one that most people strongly dislike, though I’m somewhat on the fence with it. On the one hand, I like how the general premise of “sacrificing your own art for the general public” is executed, and I think it’s done so in a genuinely poignant way that could even be looked at as an allegory for Adventure Time’s changing state as a whole. On the other hand, it stars Jake’s tail. And that’s pretty much the main problem with the episode. 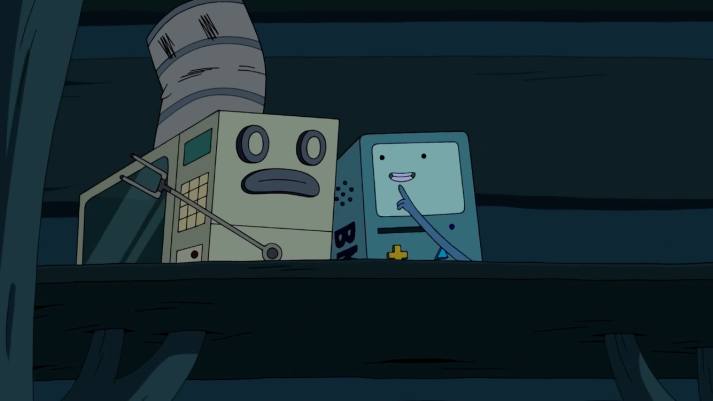 The idea of Jake’s tail, or “Blue Nose” as he’s referred to, being the star of his own episode seems like an idea that might be just bizarre enough to work… but it really doesn’t. Blue Nose is a bit too enigmatic for us to even understand what his mindset is throughout the episode’s duration, or even if he has a mindset at all. All we really know about him is that… I guess he feels as though his act is underappreciated and so he conforms to the audience’s standards and is unhappy in doing so. The circus leader favors Goralina, the giant squirrel (or normal-sized squirrel to anyone that isn’t a bug), as a performer, which angers Blue Nose to the point where he breaks Goralina out of her chains so the two can run off together and… start their own circus? Even though Blue Nose wanted Goralina dropped from the circus, and so starting his own circus would only continue said issue? Unless Blue Nose wants to release Goralina so she can experience life outside of her treatment as a circus act? I dunno, it’s too confusing and strange, and I don’t see how anyone could really grasp what this character’s actual motivation is. I don’t think it’s really supposed to be clear cut, as it is Jake’s tail, but the episode does as much as it can to view everything from Blue Nose’s perspective, and I think it would be objectively more interesting if Blue Nose was being viewed from the perspective of other characters as this really sophisticated performer. Not that these other characters are anything special either. The only other supporting player in this one is the Ringmaster, and he’s so… bleh. Not funny, not interesting, doesn’t really have any defining character traits… he’s every Ringmaster you’ve ever seen in any movie or TV show, and Sad Face doesn’t do much to expand on his character from that one-dimensional stance.

Aside from a character perspective, this one isn’t really that funny either. I know that’s weird to say, because humor isn’t the first thing I look to experience within an episode of AT, but this is a premise that’s so silly in its concept that’d you’d think that Graham Falk, who solo-boarded this episode, would try and incorporate some decent jokes down the line. Falk’s episodes are usually never filled with laugh-out-loud jokes, but his past two entries, Root Beer Guy and Shh!, had enough laughs to properly engage me throughout. Sad Face isn’t trying to be that funny, but it really only makes the experience duller. It’s a pretty straightforward carnie story, and it isn’t subversive enough (aside from the added surrealism) to actually have me invested in its plot. And also, there’s no real stakes in this one. Adventure Time manages to get through some episodes without a true conflict (Jake the Brick is a good example we’ll visit down the line) though, as I mentioned, there really isn’t much that’s keeping me invested as is, so the lack of stakes only adds to how dull the experience actually is. 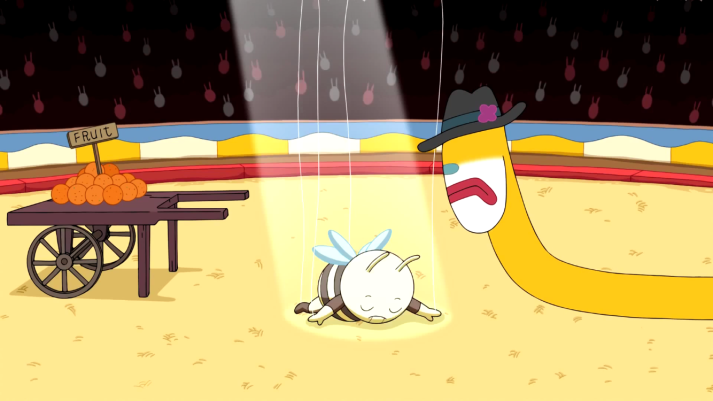 Yet, I don’t think this one is absolutely terrible. It’s not entirely entertaining, though I wouldn’t say it’s quite as boring as an episode like Box Prince. There’s a couple things I like about it; first off, NEPTR and BMO bonding more is adorable. I’m glad this is a friendship that is more commonplace within the rest of the series, as it makes for some terrific interactions between Adventure Time’s cutest main character and cutest side character. Aside from that element, the atmosphere can be quite nice in this one. I love the little bee marionette dance that Blue Nose performs during his first act, and it’s actually a quite poignant display. Granted, it doesn’t make much sense, but the soft music really helps to add a melancholic tone to the entire sequence. Graham Falk is often one of the less dialogue-heavy writers, so the music and visuals typically do the storytelling, and it sporadically is carried out well in this one. Also, as mentioned before, the whole sacrificing aesthetics bit is pretty cool when you look at how Adventure Time is viewed following this season. Many people wanted the show to return to its zany and adventurous roots after an entire season of what many called “pretentious garbage.” Blue Nose’s first act can certainly be looked at as how the fans responded to AT’s more experimental outings, while his second act can be interpreted as the fandom enjoying more of Adventure Time’s lighter and sillier material, much to the artist’s dismay. I don’t think this was the intention at all, as I don’t think that the writers actively predicted that season six would be viewed this way, but it’s still an interesting concept in hindsight.

Overall, this one doesn’t do much for me. I don’t think there’s anything actively terrible about it, but there’s nothing really actively “good” about it either, besides those few moments I mentioned previously. Sad Face is just kind of there… there’s nothing that makes it stand out aside from its wildly unique premise, but even then, I don’t think it’s even executed in a bizarre enough way to work. Sad Face has one strong benefit: it’s one I can chat about lightly before the epitome of polarity that follows after it. This is it everyone… next episode: Breezy. 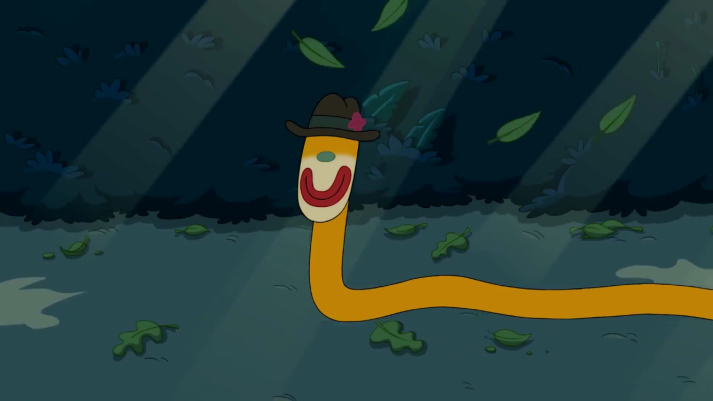 Favorite line: “Too much artsy. Not enough fartsy.”