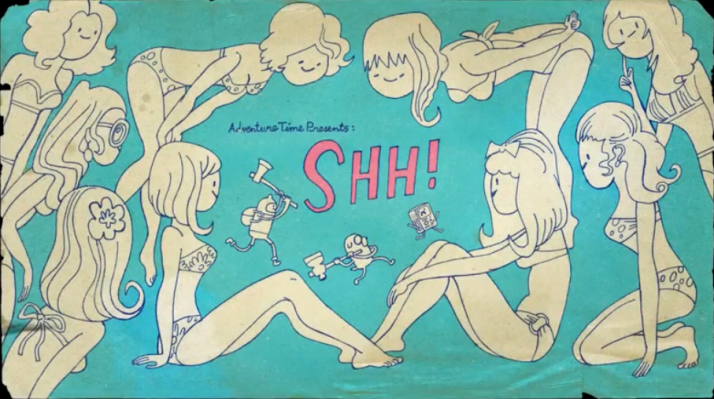 Shh! is storyboard artist Graham Falk’s debut on Adventure Time. Wasn’t familiar with Falk before he joined the AT staff, but his roots in more cartoony and expressive material, like The Untalkative Bunny, have allowed for some really interesting looking drawings on Adventure Time. Aside from season one, we’re not used to seeing cartoonish and squishy looking poses and expressions from the show, so Falk’s methods always add a bit more charm and likability to the sillier episodes. And I think it was well fitting that his first episode is one that partially pays tribute to silent cartoons of the past.

I think the stronger parts of this one do come from the first half, when Finn and Jake commit to their use of title cards to communicate with each other. There’s a lot of really funny visual gags during this portion, especially the fact that nearly every single card that Finn wrote is supporting Jake somehow. My favorite being “I love you, Jake” which Finn angrily uses to respond to his speed-writing brother. It’s both adorable and hilarious. There’s also the funny bit of build-up to BMO believing Finn and Jake are aliens where they both try to communicate with him using “the juice?” and “me too.” Real smooth.

BMO freaks out and flees the area, which puts his get together with his bikini babes on hold. The song that BMO plays is by Lake, the band that sings the outro for AT, and No Wonder I is a really great tune! Next to Rebecca Sugar, Lake provides some of the best tunes for the series, including this one, the ending theme, and two songs that we’ll visit later on. You can listen to No Wonder I on YouTube here.

The second of the portion of the episode definitely slows down a bit, just because I did enjoy all of the jokes that came out of Jake and Finn communicating through signs, but I guess there wasn’t a ton they could do with them that would span out an entire episode. Instead, we do get some nice bits, like the Spider with gloves on his hands and the mice using the running wheel, which are all moderately cute, and provide some cool designs equivalent to old Mickey Mouse cartoons and Warner Bros. shorts pre-WWII. There’s also that sad dude who lives in the wall, and it’s a longshot, but I wouldn’t mind seeing a full episode based around that dude. His existence and depression intrigue me.

After Jake tries to reason with BMO and fails (which features a pretty great shot of Jake shrunken down to be smaller than BMO; have they done something like this before? I think it’s the first time they’ve attempted something like it) the two boys proceed to axe up their wall for some reason – maybe they are possessed by aliens afterall – to get BMO out. Cue the bikini babes, and in an episode full of great visual pieces and character designs, these girls really freak me out a little bit. Their really detailed humanoid bodies and their simplistic eyes and mouth just don’t complement each other very well, and this is an instance where I wouldn’t have minded the addition of eye whites and nose features. Afterall, the guy inside the wall had them! I do like their inexplicable ability to fly, however.

The climax is decently fun; I like the way Finn and Jake are just emotionless throughout the entire battle, because the bikini babes aren’t exactly formidable opponents. I like the way the babes face of with the boys, using pinches, dancing, and volleyball techniques to inflict damage. Also, love the one shaking maracas with the title card “the jam”. It provides for a funny ending once Finn and Jake surrender their and explain their day to BMO, and BMO just says “fuck it!” followed by a dance party. Even the Party God showed up for this one, which always provides for a stellar get together!

Overall, this one’s light fun. I don’t find myself getting into it that much, but it has its fair share of funny and enjoyable moments. Again, the overall designs and drawings in this one are interesting enough to carry the episode, along with some good bits of writing along the way. Not anything remarkable, but a nice entry regardless.

Shh! was dedicated to Armen Mirzaian, who tragically passed away in a car accident months prior to the airing of this episode. Mirzaian wrote and boarded for three episodes in the first season: What is Life?, Business Time, and The Jiggler.