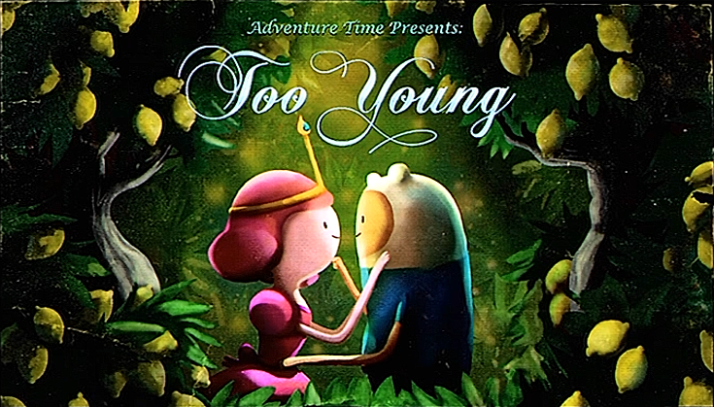 Princess Bubblegum’s transition from an 18-year-old to a 13-year-old is considered by many to be a completely wasted opportunity. For her to become younger for the course of only a singular episode may seem like a desperate attempt to latch onto the status quo, but I actually see it as a way of expanding the depth of her character for a short bit of time. Too Young is one I really love; it takes full advantage of the social experiment introduced in the season two finale, even if we only get to watch it for a short period of time. This is legitimately the one time we get to see what Finn desires most of all: his feelings for the princess being reciprocated.

The relationship between the two of them is overly cutesy, but rightfully so. Like I said, it’s really a once in a lifetime chance to get to watch Finn and PB act like a legitimate couple, and the episode takes the time to stress this as much as possible. That being said, they’re still really enjoyable to watch! I really love just watching the two of them act like thirteen-year-old kids together. Jake’s immaturity provides for a relationship with Finn where the two are still able to get into wacky shenanigans, but it’s rewarding to watch Finn hangout with someone his own age. Marceline is thousands of years old, BMO takes on the age of an infant at times, LSP is arguably late into her teen years, and even Tree Trunks is ancient. This is finally an opportunity for Finn to be especially childish, mischievous, and enjoy the company of someone on the same level as him by his side.

Of course, this is also the introduction of the one-and-only Lemongrab, voiced superbly by Justin Roiland. Not beating around the bush, Lemongrab is one my favorites. Not just because he’s funny, but because he’s one of the most uniquely complex characters the show has ever taken on. It would’ve been so easy for the writers to absolutely butcher his character down the line with hammering his “UNACCEPTABLE” or “DUNGEON!” catchphrases into the ground. They handled him much like any character should be handled: as a character, not a means of making merchandise or slewing funny phrases.

Aside from that, he’s pretty funny in this episode. I’ve seen Too Young maybe 50 times, so it’s kind of difficult for me to still watch this episode and laugh at Lemongrab the same way I did the first time I saw him, but his lines still manage to get a bit of a laugh out of me. There’s also a bit of underlying tragedy to his character. He’s a completely incompetent ruler, but he was a failed creation, as Bubblegum states. He’s only doing what he was instinctively created to do, and though he’s completely irrational, it’s sad to watch him try to rule the Candy Kingdom and constantly get beaten down by Finn and PB. It’s even harder for me to watch him get beaten up by the two kids in the hallway. He doesn’t scream or banish anyone to the dungeon or anything like that, he just weeps softly and says that he isn’t going anywhere. It’s hard to make me feel so sorry for an antagonist for an episode, yet still manage to root for the main heroes, but AT manages to pull it off.

This episode is also riddled with terrific gags and slapstick. Although I felt bad for Lemongrab when he was ambushed, I still find it hilarious when PB and Finn casually beat the shit out of him. Also, probably my favorite bit in the entire episode is the scene where Finn and PB continually spice Lemongrab’s food. It’s just so well timed and frantic that it cracks me up everytime, I especially love Steve Little’s performance during it. Anytime he screams as Peppermint Butler, it’s pure hilarity. Also, apparently food comes from Mars! Steve Little actually ad libbed that bit and the show just kind of rolled with it. It’s a nice little tidbit of information that actually works as worldbuilding, as it somewhat makes sense that food resources would come from elsewhere beyond the kingdoms of Ooo, and ties into the introduction of Mars in the next season.

While in the dungeon, we get to see some of PB’s inner thoughts that haven’t quite been explored until this point. She simply admits that it’s a tough job being ruler all the time, and she’s legitimately enjoyed being 13 for a period of time. We hadn’t seen any depth regarding PB’s status as a ruler, and it’s nice to be able to explore this aspect that would become so prominent later on. PB loves ruling her people, but the stress of constantly having to deal with every situation that occurs with the Candy People can be damaging to her wellbeing. This is made worth it by the sweet moment where every Candy Person in the dungeon offers a piece of themselves to help her through her aging process. You could argue they just didn’t want to have Lemongrab as a leader, but it’s clear that the Candy People appreciate Bubblegum to their fullest extent, and would be willing to give up literal parts of themselves for her. Also, it’s officially revealed in this episode that PB ages according to her biomass! It’s something that’s tough to even comprehend right away, and seems like a bit of a copout, but coincides with her future backstory that’s eventually revealed.

The saddest part, however, is that she’s no longer interested in Finn now that she’s 18 again. Her ability to regain her youth was what ignited her sudden romantic interest in Finn, but she sadly just doesn’t share those feelings as a young adult. It sucks for Finn, he was so close to having everything he’s ever wanted with the girl of his dreams, but he ultimately had to let it go for PB to accept who she was meant to be. In return, Jake shares with him some wise words about ladies:

It’s not easy, but you have to be persistent. You might have to defeat a demon lord, or warp through several worlds. But once you do, you walk up the wizard stairs, and produce your magic key you got in the water world and unlock the chamber door. Then, you walk right up to the princess, and give her a smooch… Does that make sense?

Whether it was meant to be literal, metaphorical, or foreshadowing something that will later happen, it’s advice that only Jake could give, and it’s as sweet as it is sorrowful. It’s truly one of my favorite endings in any Adventure Time episode. Great atmosphere, nice music, luscious colors, and the genuine honesty of our two main characters. Perhaps someday Finn will end up walking up the wizard steps with someone (holding out for Huntress Wizard).

Anyway, I really do love this one. It’s a terrific introduction to one of my favorite AT antagonists, as well as an awesome experimental look at what the relationship of Finn and PB could have been. I know it probably pisses a lot of people off to this day that the young Bubblegum subplot latest so shortly, but c’mon, did you really never want to hear Hynden Walch perform as PB again? Hm?? Despite it’s brevity, I surely enjoyed the time we spent with young PB, and I’d also enjoy the route her developmental path would take her from this episode onward. However, Finn’s budding feelings from PB will increasingly become a more intense burden as this season goes on, and take him to much, much darker places. 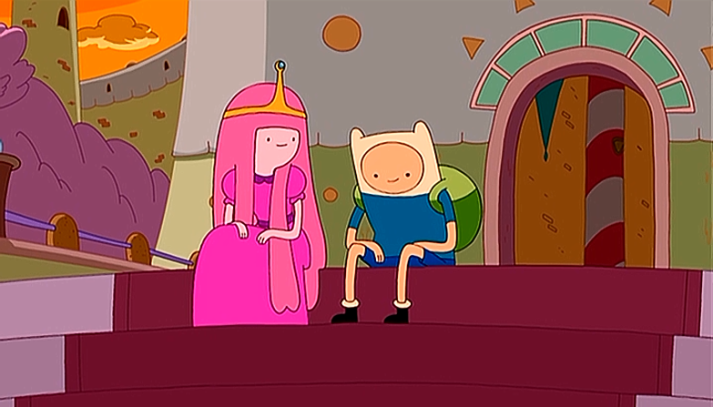 Favorite line: “Because being 13 again is… Bloobaloobie! […] While being 18 is all plock dumps and wagglezags.”