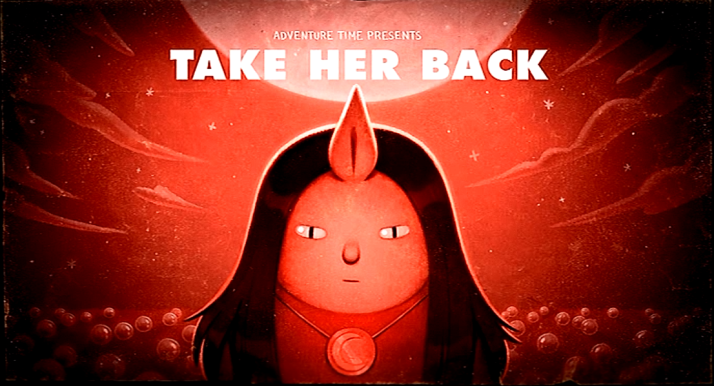 The Moon is likely my second favorite of the vamps, behind Hierophant. She doesn’t benefit from a particularly strong personality, but her design, intimidating nature, and her unique abilities are really what help her to create a strong presence. And, like the other vampires, a lot of the success of Take Her Back comes from the atmosphere and tension built around her presence. It’s also the first episode of the miniseries that incorporates PB’s slow transition into regaining her kingdom back once more, which a lot of people weren’t a fan of, but I thought was quite nice. It’s cool how PB’s desire to stick by Marcy’s side and to put someone else before herself and her kingdom directly ties back into her development when it comes to being a more caring and courteous ruler overall. The only part I didn’t like about this transition was that we get to see less of the King of Ooo, though we at least get to enjoy some more of him in this episode before his time is up.

The dream sequence in the beginning is pretty poignant and features a nice melody to carry it through. I think the dream itself pretty apparently focuses on what Marceline’s life would be like if there had been no Mushroom War and if the crown had never come into Simon and Betty’s lives. It is sad to think that this is likely Marceline’s idea of true bliss, even though she herself has never even experienced this type of reality. It’s a nice moment that highlights Marceline’s subconscious desires and what represents her concept of perfection. Of course, it’s all ruined by the burp bros: Finn & Jake. Take Her Back marks a sad transformation for Finn and Jake from two side characters who didn’t do much (aside from Jake’s role in the past episode) to actual annoyances within the Stakes miniseries. I’m not gonna pretentiously act as if fart and burp humor is the absolute worse thing to grace this Earth, because this is far from the first time Adventure Time would dabble in these types of gags. But the next three episode REALLY seem to emphasize that Finn and Jake are two goofy guys who love to fart and burp and to be as gross as possible. The way its incorporated in the story doesn’t even make sense. Finn and Jake burp on Marceline to help cure her because that’s what Joshua and Margaret would do when they were babies? But then Bubblegum tells them that their parents were just being assholes, so there you have it. Joshua and Margaret were shitty parents who enjoyed burping on their kids for their own benefit. Don’tcha just love these bits of lore into Finn and Jake’s backstory? The burps that emit from their body are especially gross as well. It’s pretty obvious to me that these are stock burp sound effects, but some of the audio clips that are used are especially off-putting and kind of disgusting.

So, that goes on for a bit, until PB mentions hubris to the clueless boys (even though Finn literally uses the word himself in The Other Tarts) as she begins to get emotional over the fact that her de-vamping machine ended up causing all sorts of nearly unfixable issues. The emotional moments in general don’t really hit home for me at all, but I was really amused by LSP berating the fuck out of Bubblegum. Something about LSP’s comedic timing in the past two episodes has been really on point, and once again, I enjoy how she actually wants to continue helping even after everyone separates. It’s nice to see her strive to be proactive for once, even if her help isn’t necessary to the grand scheme of things. I also liked Peppermint Butler’s mention of how he poisons himself on purpose for research, as he continues to be the best part of this miniseries, and only reinforces my belief by the end of this episode.

It is funny to rewatch this episode and listen closely to PB’s words, which clearly can be interpreted as “stake her back,” and provides for a really amusing thematic gag throughout the episode. I enjoyed F&J a bit more as they embarked on their journey to stake The Moon, and it was really neat getting a closer look at her various powers. It did lead for some intrigue regarding how she would actually be defeated in the end, which seems like a relatively impossible feat. But, in Finn’s head, staking her different ways for several hours might just do the trick.

On the other side of things, the King of Ooo hanging Crunchy up on his mantle was hilarious. I love Crunchy’s blank, sad glance as he’s being restrained against his will. Not only does KOO get funnier, but also even more sadistic with each appearance. It’s also a pretty nice “fuck yeah” moment for PB as she kicks her adversary to the ground while shouting “monarchies are not democracies!” and it seems apparent that the Banana Guards have literally no idea what voting KOO into office actually meant. It was amusing how they asked her permission on whether they should arrest her or not, as it’s clear that they still obey her over anyone.

The visual appeal of this miniseries returns once again with a gorgeous conversion from sunset into nighttime, as F&J deal with the worst possible scenario when finally realizing what PB actually meant. The chase scene is a lot of fun, and nice to see that even though Jake previously faced his fear of vamps in the past episode, he isn’t completely past his phobia of bloodsuckers. Again, The Moon proves to be frightening in just how ambiguous her motivation and nature is. The reveal of her demonic voice and detailed facial features only added to her uncanny state of being. The implication that she gathers power from the actual moon was a helpful sentiment in showing how she goes from a calm, non-active vamp to an absolute terror. Jake’s reactions were pretty hilarious as well, which can be attributed to John DiMaggio’s terrific inflections.

I thought Peppermint Butler’s method of healing Marceline was just a bit underwhelming, considering that Pepbut in general always has something really bizarre up his sleeve in terms of black magic, and we never get to see if this healing ritual even has any effect. So it kind of feels like padding more than anything, especially with moments like the Banana Guards’ back and forth about a yoga video (game). I did think that the moment between the Banana Guards and PB was sweet, coming back to the idea that they probably never realized that they would lose their mom all together to begin with.

The Moon’s power of paralyzing her victims came off a bit odd to me, just because of the fact that Marceline herself has never possessed such a power, but I suppose it could be interpreted as a unique ability that The Moon is able to possess through lunar power. We’re then treated to another dream sequence which revolves around an older Marceline spending time with Bubblegum in the far future, as PB herself remains the same age, though Marcy is left as an old, nearly-deaf woman. This one represents her fears of eventually dying off before her friends, which she has yet to experience in her entire lifespan. Despite her desire to change, the thought of being outlived by her best friend likely never dawned on Marceline, until it was explored within her subconscious. Thus we have the first dream, which revolves around Marceline’s concept of what could have been, and then the second dream, which focuses on what could be in the future. Both dreams touch heavily on Marceline’s feelings of loss and desperation and are nice additions to her virtually empty role in the episode.

Probably the most energetic moment for myself in this episode is when Peppermint Butler gets his grand moment of victory by literally “staking her (The Moon’s) back.” Again, it’s so nice for Pepbut to possess such a major role in the story and be something more than just a subservient side character. Which is more than I could say for our boys, who ended up once again being on the back-burner. Oh, how the mighty have fallen.

But in the end, Take Her Back is pretty good one. Like some of the other Stakes entries, the best aspect of this episode is its atmosphere surrounding the vamp of the week. The Moon is a really badass villain with a creepy voice, nice design, and equally threatening abilities. There’s more than a few flaws in this one that once again tie back into some of the overarching issues I have with Stakes in general, but the episode provides enough delightful energy in its frantically paced story and tense dilemma that I still leave Take Her Back feeling mostly positive regardless.

Favorite line: “Don’t believe in yourself so much then, dum-dum!”