Xergiok was a pretty one-note character during his first appearance in The Silent King, so it’s somewhat odd that they brought him back for another spotlight appearance in this one. I mean, it’s not completely out of the ordinary for AT to do; look at Magic Man, who started off as this really one-dimensional jerk and is now what I consider to be one of the show’s most complex characters. That goes for many of Adventure Time’s characters, to say the least, and with Jesse Moynihan behind the helm of this one, who is also behind giving Magic Man so much depth, it just ultimately seemed to make sense. However, this one kind of ends up just being pretty dull. 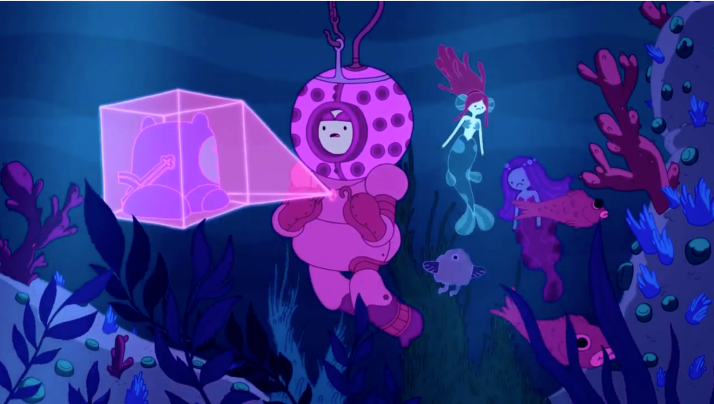 Part of the issue is, well, I just still don’t find Xergiok that interesting at all. He was okay in his first appearance, but I’m not sure as to why we’re supposed to care for him otherwise. I get what they’re going for here; I think the concept of someone attempting to change their life around after something drastic happens to them is a pretty interesting concept, and the idea of whether they’ve actually changed inside and out is always an intriguing inquiry. But again, I go back to my first statement that Xergiok isn’t really that interesting of a character, and it’s hard to sympathize with him at all when we barely know anything about him to begin with. This plot could’ve been done a lot better with maybe Ice King or even Magic Man, but it baffles me as to why they chose this character to be a representative for this theme.

The plot and motif also seem pretty weak as well. I’m not even really completely sure what to gather from it in the end. That you should leave your old life behind completely and never (literally) look back again? That change is hard, so you have to commit yourself fully to new ideas or you won’t be able to make a difference? I dunno, whatever it is, I couldn’t really gather anything that cohesive. I actually really do like the idea that Xergiok’s life turned around once he lost his sight, but I don’t feel like there were any interesting allegories or metaphors that actually came from it. Just a pretty straight forward story that ends more with a whimper than a bang.

I wouldn’t really desire a deeper meaning so much if this episode was fun, but sadly, I think it’s a bit middling when it comes to entertainment. It has its moments: I still fucking love the idea of Xergiok breastfeeding, and feel like it’s one of the most single shocking gross out jokes in the series. There’s also some good Finn and Jake moments as always, like Finn tossing the communicator that PB gave to him ala The Other Tarts or Jake discussing his cool ex-girlfriend that knew Braille, which I’m assuming is Monniker. There’s other jokey bits that don’t really work for me, like Xergiok’s psychedelic song in the sky, which I thought was just kind of dumb. I usually like whatever trippy and psychedelic shit JMoyns has to offer for this show, but Xergiok’s singing voice kind of kills it and the lyrics themselves aren’t that interesting or poetic. I also thought the ending, which was funny on an absurdist level that also tied the beginning and the end together, was somewhat of a lazy conclusion to Xergiok’s story. I like it in the sense that it offers the simple solution to loneliness, which is finding someone to be with, but it was clearly thrown in there as a silly finishing gag that doesn’t really address Xergiok’s still remaining issues at all.

I actually really like the backdrops in this one. Time of day plays a really big part with the sky scenes, as we get to see nightfall, sunrise, sunset, daytime, and a lot of different brightly colored backgrounds that just look lovely. I also like the designs of the birds as well. They could’ve easily made regular birds look gigantic, but in typical AT fashion, they’ve created some really unique looking feathered friends, with giant noses and pointed ears. I also enjoy how they’re all named after flavors and tastes, signaling that Xergiok likely has a stronger sense of taste because of his disability.

I think this one definitely has missed potential and lacks an overall feeling of fun. I think this could’ve so easily been a more interesting episode if it just had focused on the right character for the story, but Xergiok simply isn’t a character that can hold any kind of weight to himself. It’s no wonder that he hasn’t appeared once since this episode. It’s a dry F&J expedition that ends up not really having a ton to say by episode’s end.

Favorite line: “The mermaids are trying to beach themselves. I came to see why. Turns out they’re just lonely.”