Another one of my favorite title cards, this one designed by Michael DeForge. Season Five has really been on a role in the title card department.

The Vault expands the world of Adventure Time in so many different ways that it really is amazing all of this was packed into 11 satisfying minutes. It harps on so many past plot points and tidbits that other episodes had already set up, and creates a vividly sad story about a newly introduced and very interesting character. Of all the questions Adventure Time had raised by this point, the mystery behind the Ghost Lady in The Creeps made me more curious than any other aspect of the series. A lot of people speculated that the Ghost Lady was Finn’s mother, and I’d being lying if I didn’t believe the same thing at one point or another. Though, I’m glad that instead, I was treated to a story that was very different from my initial expectations.

First off, the scenes building up to the actual flashback are just great. Just some classic bits of Finn and Jake working off of each other exceedingly well; Finn’s failure to acknowledge that suppressing memories is harmful, Finn punching himself in the face, Jake calling out his bro for continuously wrecking the kitchen, Finn completely ignoring Jake to acknowledge a cricket that is chirping in the room, etc. Though there’s always one aspect of this episode and some future episodes that just completely baffles me… Are Finn’s pajamas supposed to be different in this one? I was always uncertain if this was an animation error or not, and I’m still not positive. They reappear again in Ocarina (though the storyboard for that episode suggests it may have been intentional), and I’m pretty positive they never appear again after that. I’m not sure what the reason would be for changing them, because they look way more awkward than Finn’s classic pair of red pajamas. But I digress.

The episode really picks up when we are introduced to Finn’s past lives, which, before Shoko is introduced, we see a comet, a butterfly, and “a thing.”

It is most interesting to me that Finn’s past history consists mostly of objects and non-sentient beings, rather than an array of heroic counterparts that further hype up the idea of Finn being a Glob-sent being.

And when we are introduced to the humanoid being that is closest to Finn’s current self, it is nice to know that she does share some striking similarities, as well as many differences to Finn’s mainly heroic self. I really, really love Shoko’s design. Her cat-like eyes, detailed outfit, and bare arm (I actually enjoy how Shoko doesn’t have any mods until later. Unlike Finn’s other alternate versions, Shoko just walks around with a little stub, and I think that’s pretty cool) all make for a pretty unique design, and the fact that she rides around on a giant, white tiger is even more awesome. Jesse Moynihan stated that the tiger is actually a past life of Jake, which I think is somewhat unnecessary. I just thought it was genuinely kind of cool that she had her own separate animal buddy, and it doesn’t really make a difference to me if it was supposed to be Jake or not. But again, I digress. This bond between girl and tiger in general feels very anime-ish (people have noted the connections between this and Princess Monoke) and just feels like it builds a bigger sense of fantasy for the world of AT overall. This feels less silly and just more straight-up mythological.

The Bath Boys are another delightful gang of dastardly bastards introduced in the series, and it is worth noting that the mansion they live in is practically identical to the one seen in The Creeps. It’s a nice connection that does build a bridge between the episodes so that it doesn’t seem too unrelated. It’s also worth noting that the Destiny Gang’s hideout in Finn the Human looks pretty identical to both of these buildings, so I’m wondering if the mansion in general is just a place of swindlers and bullies to take refuge across all dimensions. That’s pretty neat, honestly. The Bath Boys aren’t as well-defined as, say, the Destiny Gang, but the leader himself has a couple of funny lines here and there. I think it’s also pretty nice that it seems like the relationship between Shoko and the Bath Boys is mostly abusive; she’s forced to do work for them because she has no other way of getting by, and if she doesn’t comply with them, she’s as good as dead. 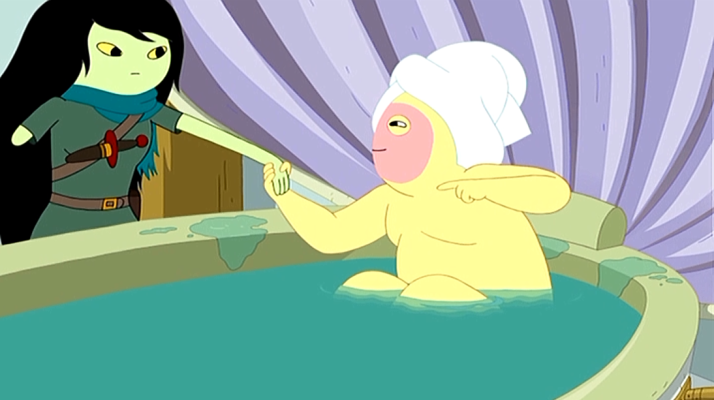 Shoko’s mission takes her to a very early version of the Candy Kingdom, where toxic ooze still surrounds many aspects of Ooo, and many Candy People are in their early developmental stages. The most hilarious being that the Banana Guards are still green. That is just priceless. We also see Princess Bubblegum, who again, does not look any different from her current appearance. This episode finally puts to bed the question of “how old is PB?” and just settles for the concept that she is, like, a zillion years old. How this never came up in conversation with Finn, I have no idea, but here it is, plain and simple. Bubblegum is really, really, really old you guys.

The bond between Bubblegum and Shoko really carries the episode through, along with some nice little bits of continuity we’re treated to, like Young Mr. Cream Puff, who is “like PB’s boyfriend.” This harkens back all the way to Slumber Party Panic, when PB briefly mentions that she and Old Mr. Cream Puff used to date. There are really no boundaries with the attention to detail AT is able to accomplish. Every single moment that happens in this world is solidified and factual, and there is absolutely nothing glanced over or treated as a mere gag. It really shows how much care and dedication is taken into the writing process for Adventure Time.

We’re also treated to a more in depth look at Shoko’s character as she interacts with Bubblegum. Aside from the missing arm, Shoko also has the unfortunate similarity of having some shitty parental issues, namely that her parents legitimately sold her arm for a computer. And it’s sad to see that we’d be treated to Finn’s parental figure being the reason he lost his arm in the near future. Shoko seems quite disconnected from all feeling and her emotions because of it, and instead chooses to live a life where she works more for herself rather than the people around her. Though her story is left purposely ambiguous, I do wish we were left more time to really get a grip on who Shoko is and dive deeper into her own psychological issues. But what we get is perfectly serviceable.

As she works more closely with Princess Bubblegum, Shoko is able to acquire the one thing she has never had in her life: a close acquaintance. Someone to chat with, share personal stories to, and even be a little bit goofy with at times (love the bit where she hands Princess Bubblegum the duck to engineer with). But ultimately, even after sitting through a tremendous exercise like building the Gumball Guardians, Shoko is still only there to steal from Princess Bubblegum and to make money for herself. It isn’t until Shoko receives the modded arm from PB that she realizes the weight of her actions; for the first time, Shoko acknowledges that somebody cares for her, and it goes beyond simply wanting her limbs for technological advancements. Bubblegum has given Shoko an arm, but more importantly, a close friend. Yet, Shoko realizes that she still has to go through with it. Despite the kindness that PB has shown her, she is still alone in the world and will have no one if the Bath Boys get to her first. The tragedy in this is that all Shoko had to do was tell PB the circumstances of her actions; the Princess could’ve easily taken care of the Bath Boys with her new technology, and also could’ve given Shoko a new home. Yet, Shoko’s fear of her own happiness and comfortable safe space in a world with no loved ones drove her to betray her one and only friend instead. Even if it means using her new “plug n’ play” to do so.

It’s a pretty heavy decision Shoko makes, but one that is slightly made lighter by the fact that the Gumball Guardians are at their all-time funniest. Their desire to protect the Princess beyond anything else is just great, and I almost wish they would show this dedication and how powerful they really are in the rest of the series. Shoko does end up stealing the amulet, but to no avail. She quickly finds herself in a vat of ooze, with no way of being rescued or getting out safely. It’s a sad moment for PB, and she and the tiger look on at each other quietly. I get the feeling that PB really did care for Shoko, and that she would’ve welcomed her into the kingdom happily. With Marceline gone, PB really didn’t really have anyone to relate to or to even talk to at the time besides her Candy children, and now she, like Shoko, is left how she was when the flashback sequence first started: alone.

This is where the flashback sequence ends, as Finn discovers that Shoko ended up dying on his own stomping grounds, where she also ended up gaining a new arm in the process (yeah, that’s right, Finn gaining his arm back was foreshadowed too!) It’s also where the episode is met with a quiet conclusion, as Finn returns PB’s amulet to her once more… what the point of this moment was, I’m not really sure. The amulet never plays a part in the series ever again, so they might as well have never included Finn giving it back to PB to begin with. Would’ve been awesome to see what kind of power it was able to possess.

But yeah, this one is pretty solid. I think my main complaint is simply that Shoko is never mentioned or seen again after this episode, and it’s a shame, because she’s a really interesting character that I would like to see a bit more in depth. But that aside, it builds on AT’s lore tremendously well, and answers some much needed questions that left me satisfied for quite some time. It’s an experiment that I think goes over really well, and I definitely wish we got more episodes like this in the future.

Issue 50 of the Adventure Time comics focuses more on the story of Shoko and Finn’s other past lives, and it’s quite excellent! It’s one of the few strips I really would like to see adapted into a full length episode, so check it out if you get a chance!

Edit: Just realized I had already plugged Issue 50 in my review of Davey. I guess you can tell how fond I am of it.

Favorite line: “I thought we could do some two-arm stuff, but… uh, it’s cool!”