Finn, Jake, PB, Lumpy Space Princess and Hot Dog Princess are all participating in the Mallow Tea Ceremony, which involves them bouncing up an down on marshmallows and trying to drink tea, I guess? Every time they have one of them in my hometown, they neglect to send me an invitation. Finn claims it sucks in a big way, and calls out LSP because she’s floating, not bouncing. LSP ceases floating to show Finn she’s capable of doing so, and ends up biting Jake, which accidentally infects him with “the lumps.” LSP claims the only cure for Jake is in Lumpy Space, and he has to be cured by sundown, or he’ll be lumpy forever, because “werewolf rules.” Finn, Jake, and Lumpy Space Princess rush off to Lumpy Space, while PB tends to a bad case of diarrhea. What, did they just leave Hot Dog Princess by herself?? That was rude.

The boys and LSP transport to Lumpy Space through a frog on a mushroom, using the password “WHATEVER, IT’S 2009.” Wondering if that was an in joke referring to the year it was produced in, because as Finn states six seasons later, no one tracks time like that anymore. Anyway, they get to  Lumpy Space and LSP mentions that the antidote that will cure Jake is on Makeout Point, but they have to travel by car, something which her parents won’t let her borrow for telling them to “lump off.” I still have no idea how in the hell Lumpy Space King and Queen work. Were they just… born conjoined? Gross. LSP calls up Melissa, who’s dating her ex-boyfriend Brad, to drive them over to Makeout Point. Finn keeps getting more pissed off with LSP getting distracted, and Jake is getting progressively more lumpy. Instead of driving to Makeout Point, Melissa stops at Brad’s house, because the two of them are headed to prom-coming. Melissa is offended because she thinks Finn wants to make out with her, but no worries, Finn will get his share of lumps once season six comes along. 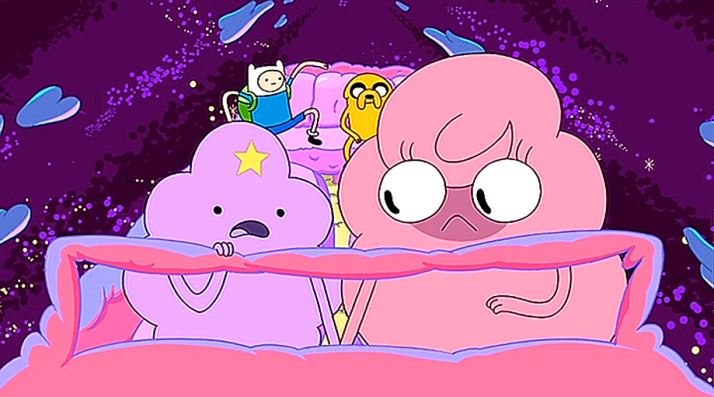 Once they finally reach Makeout Point, Finn and Jake meet a gang of colorful characters, who all sit their butts on a sphere in order to temporarily get rid of their lumps. They happily offer it over to Finn, but LSP floats over and infuriates the gang, leading them to take the orb back from Finn. Finn’s all, “the fuck, LSP? Now my best friend’s gonna be lumpy forever all because of you.” LSP gets all emotional because she states that, even though she screws up, Finn is supposed to be her true friend. Her, Melissa, Brad and an even lumpier Jake head off to prom-coming, as Finn flips shit on Lumpy Space. The gang returns and admires Finn’s hatred of lumpiness (two hate crimes in two episodes!) and offer him the orb once again. Finn takes it, but realizes he doesn’t have a car to get to promcoming, and makes the decision to jump from cloud to cloud. One of the gang members claims that he won’t make it there alive, but has a 50/50 chance to survive if he was lumpy. Finn then sticks his feeble little 12-year-old arms and legs into the teeth of these strange lumpy people (it was a lot weirder writing out than viewing) and floats into the promcoming building. Finn tries to force Lumpy Jake to sit on the orb, but Lumpy Jake ain’t havin’ it. Finn then transforms into Lumpy Finn and takes the orb for himself, prompting Lumpy Jake to want to sit on it. Jake is restored to normal and tries to force Lumpy Finn to sit on it, but Lumpy Finn ain’t havin’ it. LF runs into a bulky lumpy person and loses consciousness, only to wake up and be normal again. Finn apologizes to LSP for sorta being rightfully mad, but then they all dance and wave their noodley arms! 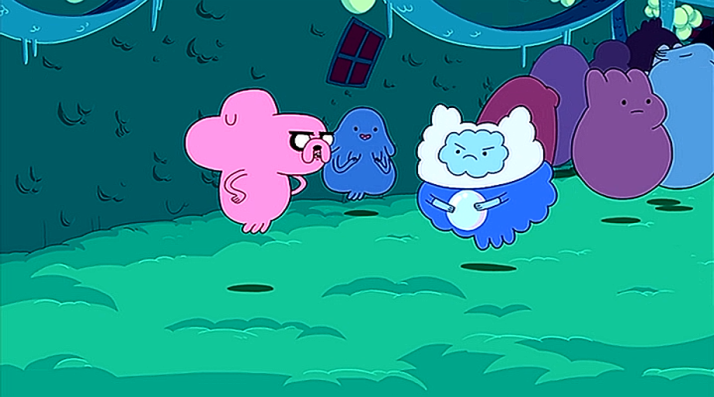 I should first mention that I’m not the biggest Lumpy Space Princess fan. That is to say, she’s perfectly fine when she serves a minor role in the plot or is just there to hang out. Whenever she’s in the spotlight, however, I don’t think it works very well. She’s largely vain and self-absorbent, making it hard for her to carry an episode by herself. That being said, I didn’t really sympathize with her at all during Finn’s freakout, because Finn was pretty much entirely in the right. She wasn’t taking Jake’s transformation seriously throughout the episode and Finn’s desperation for his best friend was pretty clear from the start. LSP has very few redeeming qualities, which is fine when it comes to laughs at times, but any attempt for me to feel bad for her falls a bit short (we’ll get to the two exceptions in the future). However, it’s only a small part of a mostly decent episode. I really enjoy Lumpy Space; the purple, pink and grayish blue colors are really a spectacle, and it’s a shame we only get to see it a couple times after this episode. Like the last one, I really enjoy the establishing of Finn and Jake’s strong relationship in this episode. Finn cares deeply for his best friend and Jake cares enough to act like everything’s fine while going through the transformation sequence. There are a few good laughs in this one; I really like Jeremy Shada and John DiMaggio’s inflections on Lumpy Finn and Lumpy Jake respectively, they did an awesome job of mimicking Pendleton Ward’s valley girl accent. The Lumpy people are mildly amusing, I really like that gang of lumpy people and LSP’s parents get a big laugh out of me. Another wild and weird episode to kick off the premiere night.