Two Swords takes a step back from the frenzied ambiguity that the previous two episodes had consisted of and takes a moment to add clarity to the current situations at hand. I was initially under the impression that Reboot would bring us straight into the Islands miniseries in the following episode, though this episode interestingly has very little to do with the fallout of Preboot and more so with the fallout of Reboot. Much damage was done to our main and supporting cast, and an entire new entity was unveiled in the process. Thus, Two Swords seeks to sit us down and explain some much, much needed information that isn’t even exactly clear by the end of it, but the show knows just as much. Bubblegum’s confusion is directly identical to our own confusion, as we try and piece together who and what exactly the mysterious grass guy is.

Right away, this episode starts off with a glorious, triumphant moment that everyone has been very patiently waiting for: Finn FINALLY has a bionic arm! Good Lord, it’s happened! I remember being super stoked by this news when promo images first arrived, though I was equally on edge regarding this concept. I was never as furious as others were regarding Finn getting his arm back in Breezy, but had he gotten an identical arm following the events of Reboot, I’d likely be consumed by my own frustration at this point. I even remember seeing a storyboard promo for the future episode High Strangeness, where Finn was drawn with a normal arm, and being absolutely disdained by that concept. Though, luckily for myself and the sanity of others, the bionic arm was added in the animation process, and Finn remains being arm-less throughout the course of the series. I really enjoy how Finn mentions his numbness to losing his arm a second time, in a way that connects to his tolerance of pain and tragedy. The original loss of Finn’s arm signified his grapple with abandonment and the absence of his former self, though here, Finn seems to spin that loss around into something more positive and exciting overall. He’s learned to live and move on with that loss in his life, so once the arm itself is finally gone, he’s adapted and doesn’t really notice said absence. Really nice motif there.

The contents of this episode really boil down to two informational backstories: Finn’s first encounter with grass Finn, as well as the backstory of grass Finn in general. The first is told in a way that immediately follows the events of Reboot, as grass Finn quickly shifts from his rounded, bushy form into a figure that is more closely identical to Finn’s. I will say this: Grass Finn, as he’s referred to in this episode, is one of my favorite characters in the series. Not only do I love his design, voice work from the talented Hayden Ezzy, and his general demeanor, but he likely has one of the most intriguing and haunting backstories in the entire show, and they never really stray away from such. This is a character who could have so easily been just a copy of Finn (I’m so glad they didn’t just have Jeremy Shada voice him, by the way), but they chose to take him in such a unique direction to the point where he also becomes one of the show’s most sympathetic characters. 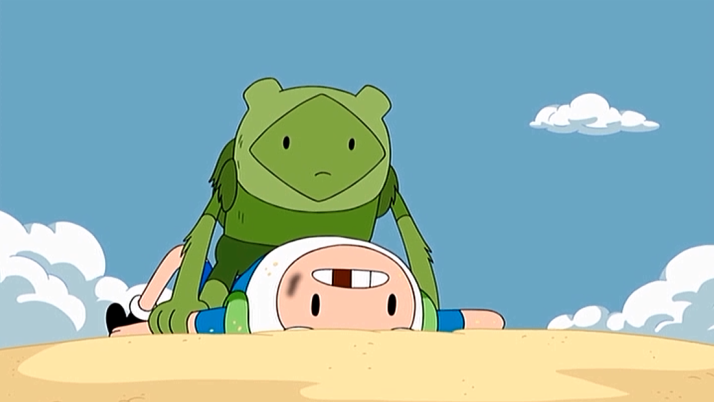 In a way, grass Finn is behaviorally identical to Finn – he’s goofy, true to his friends, and good-natured. I even like how his behavior also brings out a side of Finn we don’t often get to see; while addressing Finn when they first meet, grass Finn is awfully smug about Finn being dressed exactly like him. I don’t think that Finn is generally smug as a person, but I’m not really surprised at the fact that he would have somewhat of an ego regarding his state as one of the most prominent heroes in Ooo. After all, one of Finn’s biggest character flaws that has been present even in his tween days is his more judgmental side, so it’s likely that he does acknowledge his legacy and status to a degree.

The thing that is somewhat terrifying about grass Finn’s existence is that none of what he believes to be real is actually real. Everything he knows about himself and those close to him is essentially a lie, so I really don’t blame him for going off the handle in the second half of the episode. I mean, honestly, who wouldn’t with this potential reality at hand? Granted, he’s also being partially possessed by a cursed squid demon from the remnants of the grass sword, so that’s a factor as well, and accurately represent the “inner demons” that exist within him. The scenes between the grass sword demon and Finn Sword are particularly eerie. As I previously mentioned, I think Hayden Ezzy is really talented. Not only does he add a lot of charm and emotion to grass Finn’s character, but also manages to pull off a truly intimidating performance as the grass squid. I feel like the grass squid’s role within grass Finn’s mind could easily be labeled as a justified reason for his volatile behavior, but I think it goes much deeper than just a curse. In general, grass Finn’s darker side only comes out when facing the turmoil of his own existence, so I do believe it’s more of an inability to cope with his own circumstantial state of being, rather than some kind of possession from the grass demon. Just the like the grass sword itself, it only arises in certain states of emotion. For Finn, it was somewhat of a fight-or-flight response, whereas with grass Finn, it channels into his negative emotions of inferiority. 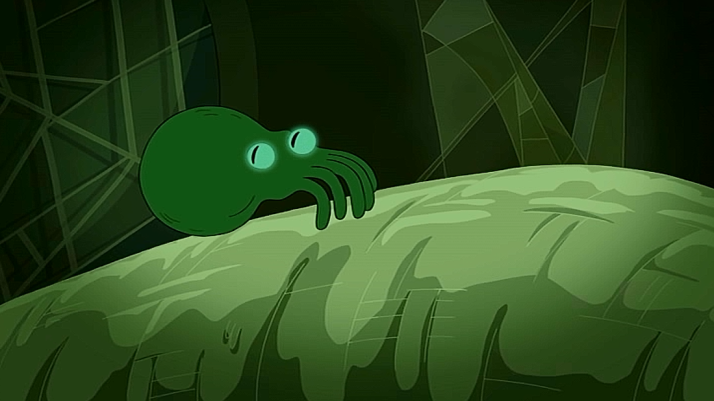 I also wonder if part of grass Finn’s inferiority comes from the idea that, whenever the grass sword would attempt to help Finn in his time of need, it often lead to more harm than good. The grass sword cost Finn his arm in Escape from the Citadel, refused to cooperate with him in Checkmate, nearly harmed Farmworld Finn in Crossover, and smashed through the Finn Sword in I Am a Sword. Perhaps grass Finn feels somewhat subconsciously responsible for consistently failing to properly get things done, and that guilt continuously plagues to the point of an identity crisis when he begins smashing up the Tree Fort. Upon interrogation, Finn does reflect on what he and PB had chatted about and concluded within the Candy Kingdom hospital. Finn begins to realize that grass Finn likely is the same Finn that once existed within a sword and, essentially, is his own being. This is where Finn decides to give grass Finn a Finn Cake – a symbolic display of respect that places grass Finn on the same level as Finn himself. Grass Finn is reminded of who he is: a “good boy” who enjoys embarking in heroic endeavors. While he doesn’t have himself fully figured out, he’s at least left with the knowledge that he has an idea of who he wants to be. However, Two Swords closes out with a chilling reminder that the turmoil within grass Finn remains very much alive through the existence of the grass demon, simply waiting to be unleashed.

Aside from being an interesting episode of exploration, Two Swords is also filled with many funny moments. I love Jake’s sudden and destructive awakening when he finds out BMO’s in trouble, BMO’s call to Finn about him wrecking the kitchen was hilarious, and the general interactions between grass Finn and Finn upon meeting are great. This one’s also filled with some great storyboarding feats, especially on Wolfhard’s part; Jake following grass Finn around in a circle repeatedly was great, and I’m not entirely sure why, but I love Finn nearly falling on his ass while trying to retrieve a Finn Cake. Dunno, that moment just felt so human and realistic to me.

Overall, Two Swords is a pretty great introductory to grass Finn. It’s funny, dark, and does a solid job of introducing his character in the most interesting way possible. While this episode establishes a lot of grass Finn’s character, I think the next episode does an even better job of working with his character’s strengths and weaknesses. 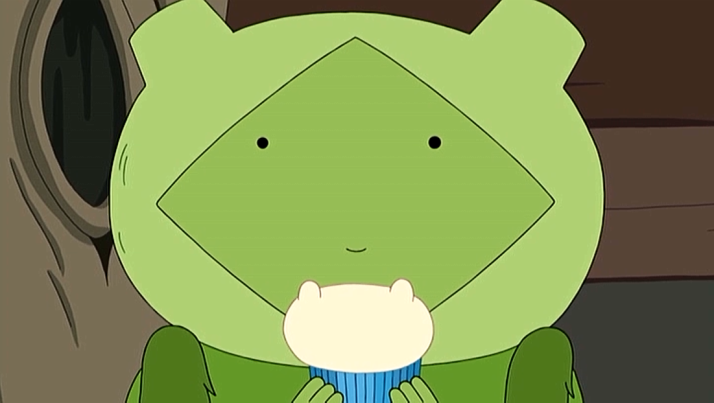 Favorite line: “I have a crush on Jake.”