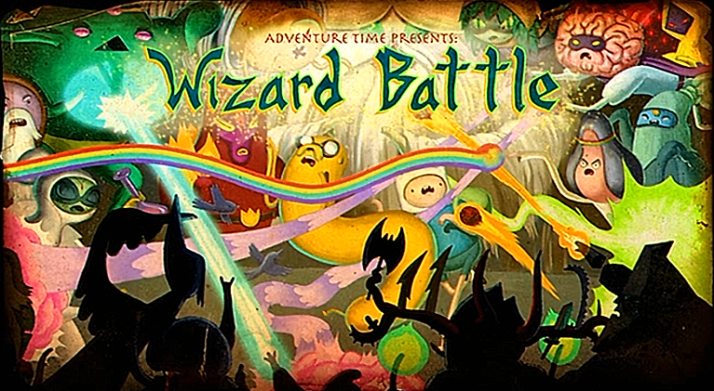 Wizard Battle is a bit of a missed opportunity in my book. Instead of taking the time to actually show us some really cool wizard battles (this really could’ve simply been a standalone Ice King episode of himself participating in the battle) it’s mostly shaped down to a pretty simplistic, yet mildly effective Finn-PB romance plot. 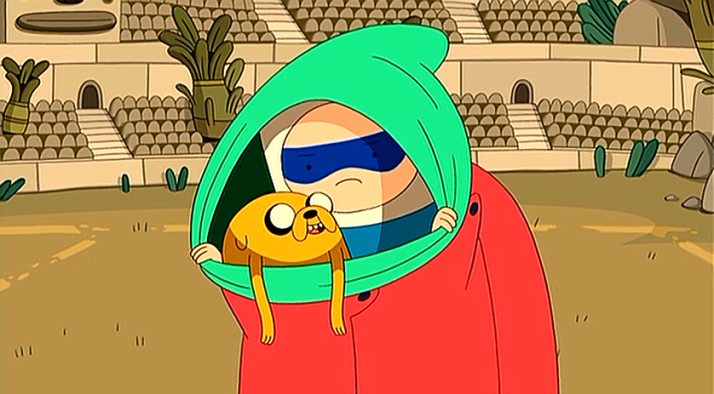 In general, pretty much all the wizards are there. Huntress Wizard, Laser Wizard, Bufo, Grand Master Wizard, and so on. Even Science Whyzard is there, who is actually just Doctor Princess in disguise. What a bizarrely interesting cameo that makes for as well. What prompted the writers to have Doctor Princess pretend to be a wizard? Considering her character’s entire life is a giant facade, it actually does make sense with her identity that she’d make up an entirely new false persona.

It’s a considerably weaker Ice King episode, since he really doesn’t have any strong characterization or motives besides simply wanting to kiss Princess Bubblegum. And c’mon, where are his ice nunchucks from Chamber of Frozen Blades?? That could’ve easily solved the barely addressed conflict of the IK cheating right there. Though he doesn’t take a large amount of focus, because this is the debut episode for Abracadaniel. Abracadaniel’s a humorous dork; he’s definitely not one of my favorite side characters, and in terms of awkward nerdlings, I think I’d choose Banana Man over him. He still gets a decent amount of good lines, and I still really love that Steve Little delivery. The animation and timing for how much he struggles to use his wand is really terrific and only strengthens the experience of Abracadaniel’s incredibly weakness as as wizard. 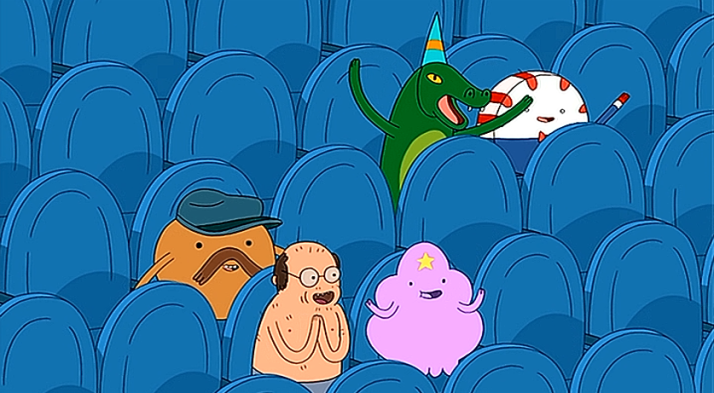 Love the total of five people in the audience. I hope that gator had a good birthday.

It’s also a bit odd to see Princess Bubblegum at a pro-wizards event, considering how strongly she feels about magic versus science. Even weirder is her subjecting herself to being seen as a prize to anyone who participates in wizard battle. As Jesse Moynihan gracefully stated:

“She’s a diplomat, her number one priority is to keep the peace.”

And from Kent Osborne:

“It’s like the president participating in an Easter egg hunt.”

I still think it’s a bit of a stretch that she’d attend an event like this, but it seems like she isn’t completely taking it seriously to begin with. The only one who’s really taking it seriously is Finn, who arrives at a breaking point when it comes to his feelings for Bubblegum. The real meat of the episode is when he blows up at Jake, simply because it’s taken Finn this long to be completely honest with his feelings about PB. Though at the same time, it’s somewhat odd. Wasn’t Finn pretty upfront with Jake about wanting to go out with the Princess back in Too Young? It seems like this scene could’ve fit a bit more gracefully back in season two, but nevertheless, it’s a very well performed moment of turmoil that doesn’t take itself too seriously or dramatically. 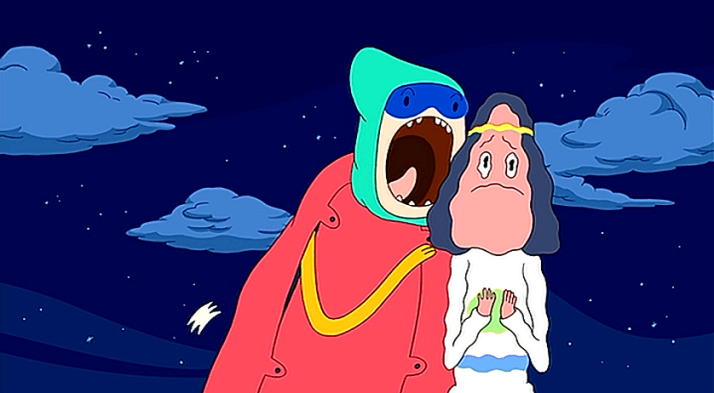 Besides that one scene though, I think the rest of the episode is pretty disposable. I love a lot of the designs of the wizards, including Finn and Jake’s cosplay outfit, and I really would’ve enjoyed seeing some of the many interactions between them. There’s plenty of quirky gags and funny lines to get me through, but Finn’s infatuation with PB just isn’t enough to keep me invested in the plot, and I think this was a point when these types of stories were becoming stale. We pretty much know for certain that, as of Too Young, PB totally isn’t going to slide for Finn romantically. That’s not to say his infatuation can’t go in an interesting direction, like it does later in this season. But Wizard Battle takes it in a direction that just feels repetitive. I’m glad that Finn got his one kiss from PB (his very last in the series, as well) but I’m also glad this is the last episode that deals with his love for her in such a competitive way.

At least Ice King looks crazy see-yik in those glasses though.

Favorite line: “Well, I’m going back to my cave to wait for someone to kill me. Goodbye.” 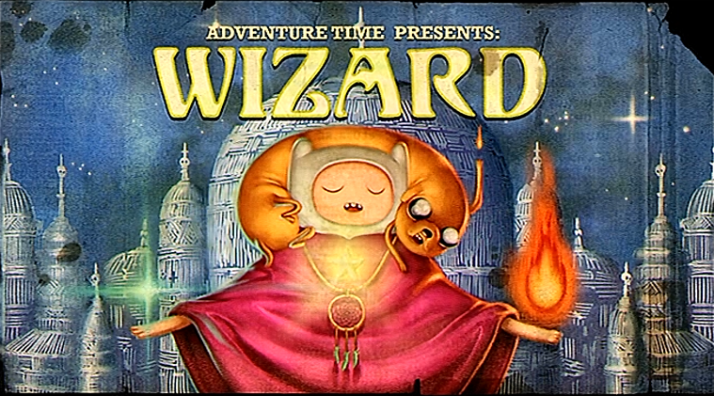 Wizardry has always been one of the most interesting topics brought up in “Adventure Time.” Whether talking about the species, religious aspects or the secrecy behind its culture, wizardry has been fleshed out majorly throughout AT’s run, and has given us some of the most thought provoking material and most mysterious elements of the entire series.

“Wizard” doesn’t provide anything too heady, but it’s a great deal of fun and a neat introduction to wizardry itself. Finn and Jake are strolling along in the woods and find a stranger named Reaper, who offers the two boys free magic powers, but Finn is a bit skeptical at first. However, Reaper offers up a keychain with those magic powers, so Finn accepts that offer. I mean, who wouldn’t? Keychains are rad. F&J travel through a portal and end up at a wizard training facility. They meet a magic frog who offers to lead them to a wizard named Bufo, which the frog reveals to be several tadpoles inside of his croaker, all voiced by Tom Kenny. I think it’s really interesting that Tom Kenny voices a majority of the magic users: Ice King, Magic Man, Laser Wizard, Urgence Evergreen, Bufo, etc. As repetitively as he’s used in most animated shows in recent years, he really does a standout job to give each of these magic users their own identity, and Bufo is no exception. His whimsical inflections, as well as the echoing by the tadpoles, real brings life to the character. 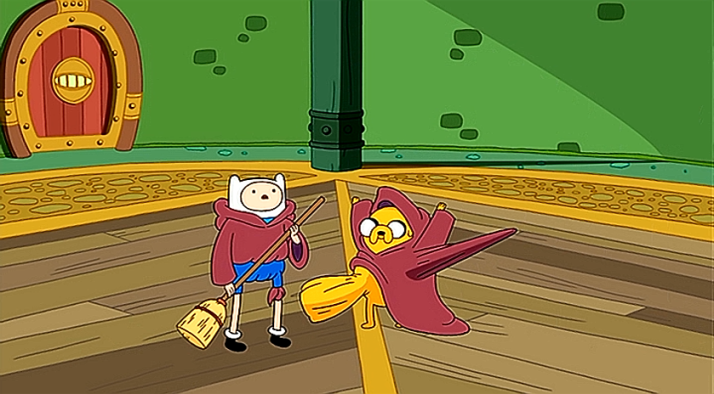 So Bufo brings the boys inside the facility and begins training them to become magic users. Their first trial to achieve “dustomancy” is to eat a broom. Jake uses his stretchy powers to eat the broom with no sweat, but Finn takes quite a while to finish. That poor kid’s gonna have wood in his stool for weeks. The boys achieve dustomancy, which allows them to control dust particles in the room. Magic is neat-o! The next trial is to touch a bowl of eyeballs blindfolded, but Jake’s peaks and see’s that the eyeballs are just peeled grapes, so the boys have no trouble. I’m just wondering who has the time to actually peel a bowl of grapes. A very amusing montage of the many trials Finn and Jake had to get through follows. I love how inconsistent the difficulty is of some of the trails; after about thirty trials, Jake has to put an orange slice in his mouth, and then proceeds, yet he had to eat a broom in the first trial. The spells are especially silly as well, who would’ve thought that wizards could shoot mayonnaise from their fingertips?

The boys reach the final trial, but Jake backs out and casts a sleep spell on himself because he already has everything he needs, what with his unlimited mayo supply. Finn’s still in it to be an ultimate wizard, and takes “The Pledge of Ultimate Responsibility” to proceed. Little does Finn know is that he agreed to shoot his magic at an orb with two other old wizards to prevent an 847 year old meteor from hitting for the rest of eternity. The philosophy of “magic, madness and sadness” wasn’t yet introduced into the series yet, but it could easily be applied to this episode. The idea of hanging by a rope and using magic to prevent a meteor from hitting a castle for an entire lifetime is certainly mad, and the fact that it’s the sole purpose of these old wizards and Finn is especially sad. But, since Finn is energized and full of youth, his does things his way and tries to prevent the meteor in an anime type fashion where he shows off his various abilities to drag the meteor out of the way. 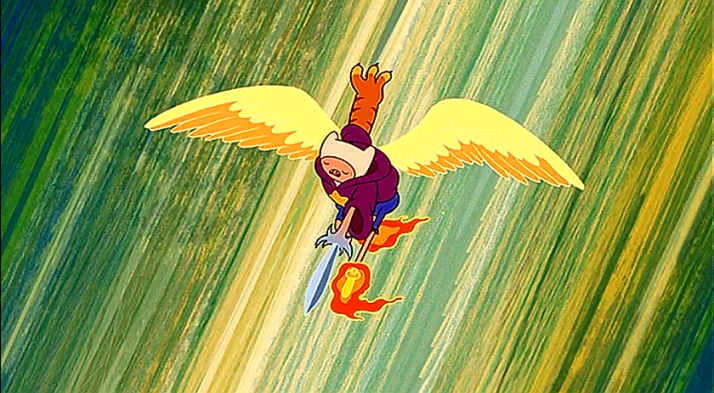 The transformation sequence is terrific, showing off some of the many crazy and creative wizard powers, as well as some superb animation. Finn tries to get Jake to help him, but Jake is conked out. The old wizards join in with Finn, and successful drag the facility out of the way. The meteor hits the ground and causes a large explosion that blows the clothes off of everyone. Bufo’s all upset because his whole life revolved around giving people free wizard powers to protect the meteor, but now the meteor hit. Finn, with a piece of wood covering his junk mail (the time’s are changin’), tells Bufo to still give out free wizard powers, and then he and Jake run into Reaper again, who offers them a demon heart. But no keychain? 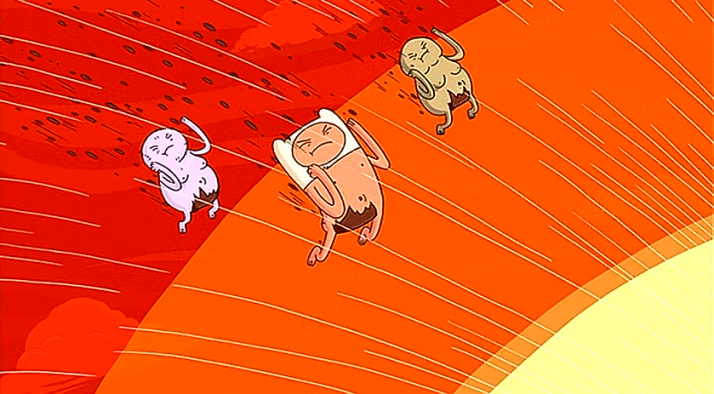 Like I mentioned, this episode’s a ton of fun. It’s very creative with the unlimited possibilities for wizard powers there are, and really takes advantage of it. In addition, this is a really funny episode! I know I haven’t really mentioned that as being a big factor in the past 10 or so episodes, but the humor in this episode is spot on. I love the little visual gags throughout, such as Jake eating the broom and growing small, only for the broom to be sticking out of his gut. Also, Finn sending a spell to wake up Jake but instead accidentally giving a rock life got a real kick out of me. In addition, wizardry is just a really cool element of the series for me. I love to see all the different layers there are to these characters and species, and this was certainly a delightful introduction to magic users.