The episode starts out with a solid minute of Finn and Jake sledding around in the Ice Kingdom, which includes the usual fun snow activities of decapitating snow golems and covering a cyclops in snow. I have to say, even though I find season one of AT to be the weakest of the series, it really does a great job of establishing an element of fun and excitement. Finn and Jake are pretty intoxicating to be with throughout the first part of the episode, and it’s hard not to want to join in on their good times.

During their fun and games, the boys accidentally bump into the Ice King, effectively pissing him off. Ice King bickers with the boys back and forth about his status as a big nerd, and how F&J were just trying to cool off because a totally hot Lava Man is outside the treehouse (not sexy-hot). Ice King summons his snow monsters to kick some little boy and magic dog ass, but F&J prevail. The duo rubs it in Ice King’s face, but IK freezes them into a block of ice. As they return to the ice castle, Ice King tosses Finn and Jake into a cell with a bunch of kidnapped princesses, including Wildberry Princess, LSP, Slime Princess, Hot Dog Princess, Ghost Princess, Emerald Princess and Raggedy Princess. Where’s my girl Embryo Princess??

Slime Princess informs Finn that Ice King had been keeping them there for weeks in order to pick the perfect bride. Finn and Jake brainstorm ways of escaping, including using Finn’s iconic flute, but it’s ineffective. Jake suggests shapeshifting his hand into a key-hand, but Ice King freezes Jake. Finn flips out and the princesses complain that they aren’t having any fun, even though Ice King read them the classic timeless novel “Baby Whoozlefut & the Wuttlebugs.” IK then suggests they should all play instruments, while Finn strategizes a plan with a very detailed thinking face. God, it’s weird seeing Finn with eye-whites.

While Ice King takes a shit, Finn devises a plan for the princesses to all act like they’re having fun so IK can release them. The plan works, and Ice King opens the cell, only for Finn to kick him square in the face. Finn confronts the Ice King and knocks him unconscious, as Ice King enters a dreamlike world and ponders his existence. It’s both pretty funny and pretty sad to watch; obviously Ice King is insane, but you just sorta feel bad for this guy. Sure, as the Cosmic Owl states, he’s a sociopath. But he’s written so charismatically that even after threatening to kill princesses, you still just want this old creep to have a friend or two! 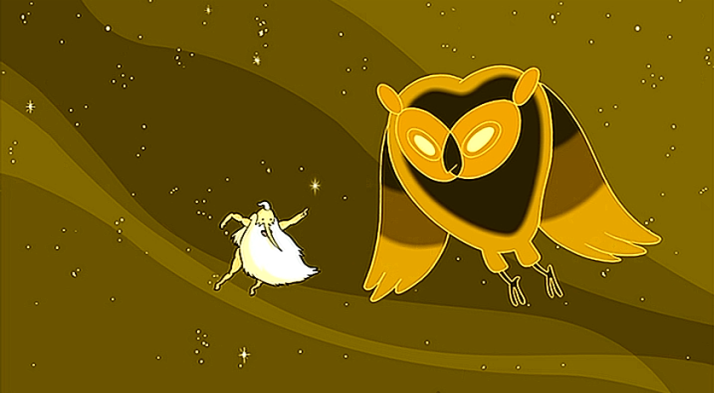 Ice King awakes, but all the princesses have escaped, along with Finn and Jake. Slime Princess then asks Finn if she can marry him, but Jake claims that Finn pees in his pants constantly, so SP backs off. Somewhere, a 7-year-old bed wetter is feeling very triggered. My condolences to that child. Anyway, this episode was a pretty solid introduction to Ice King. He doesn’t quite sound like the IK yet, just as how Jake doesn’t really sound like Jake yet, but you feel sympathetic for him as well as feeling like he’s a decent threat, while also being able to laugh at him. Quite the combination! Like I said before, this episode does a really great job of showcasing the enjoyable presence of Finn and Jake, while the past two focused more on the bond between the two. The beginning is an invigorating journey through the Ice Kingdom and the energy remains throughout the episode. I also really enjoy the extended cast of princesses they introduce, including one of my favorites, Slime Princess. I could listen to Maria Bamford talk all day long, truthfully. (insert pun about this episode being cool here)