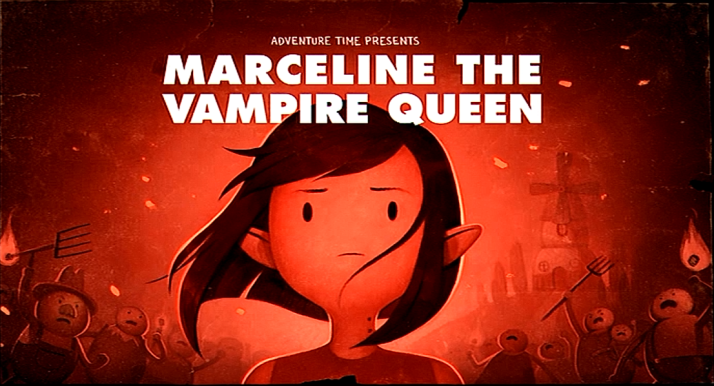 Stakes time, baby! Just as a heads up for y’all, I will not be analyzing the entire miniseries as a whole until I cover each individual episode of Stakes. Though they all follow a linear story, each episode of Stakes has its own identity and purpose, and I think it’s important that they’re discussed separately. Hell, that’s one of the main reason I started up this blog; I grew very sick and tired of seeing reviews that only discussed the actual quality of the miniseries as a whole without looking at what each episode (which were all worked on by different writers and storyboard artists) had to offer. So, let’s get started with Marceline the Vampire Queen! 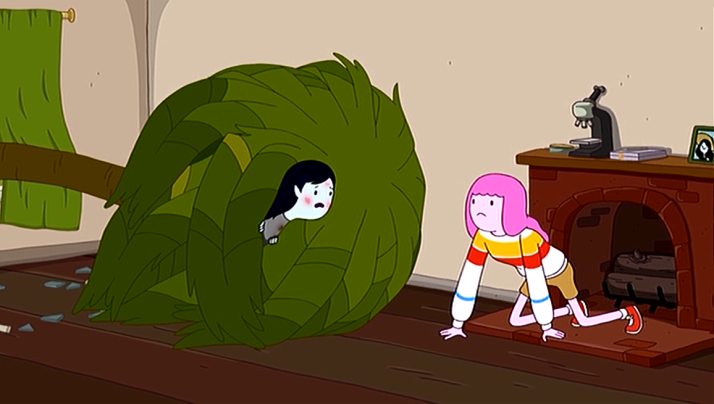 This one’s mostly set-up, as one would and should expect from a series of connected episodes as such. As far as set-up goes, I think it accomplishes much of what the miniseries would later expand upon, including the nature of vampirism, how it affects Marceline, and what conflicts face our main heroes as they embark on their journey. Granted, I think this one holds up a bit less on its own than when I first watched it. Considering that the terrific Everything Stays follows it, most of my positive feelings that reflected that half-hour seem to be in regards to the latter half. That’s not to say that Marceline the Vampire Queen is without its moments. There are some especially funny moments, along with a decent portion of nicely drawn and well-animated sequences. My issue with this one is that it seems a bit tonally dissonant in some areas; one of my main critiques of the miniseries as a whole is that it can try to be a bit too jokey and quirky in some areas where it isn’t really warranted. I feel as though many of these episodes are constantly trying to throw out jokes every five seconds, and it usually results in a mixed bag of really funny moments, and a handful of unfunny bits. Marceline the Vampire Queen is very much similar, in that it wants to be taken seriously, but also wants to entertain its audience, which is a trademark of Adventure Time in general. But it partially feels a bit forced in some areas, and I’ll try to explain what I mean as much as possible.

First, I do like how the beginning of this episode plays out. Marceline struggling to reach her umbrella as she seeks refuge under a shady tree is a great way of framing Marcy’s pain and struggling in her current state. I initially thought the premise of the miniseries in general was kind of weird, considering that we never really saw Marceline struggle with any in depth, personal issues regarding her curse, but I think Marceline the Vampire Queen does a pretty decent job of explaining it. I quite enjoy Marcy’s interactions with Bubblegum, and how she describes her vampirism as a constant reminder of her messed up past and how she’s unable to completely move on from it. Though her inability to expose herself to the sun is primarily what kickstarts these feelings, it’s nice that Marcy describes an underlying and deeper source to her issues that has been plaguing her for some time. After 1,000+ years of being a vampire, the stagnation weighing down Marcy’s life seems like it would surely take a toll on her mental health, considering that no matter what she has done before, she can never move on from the disability that constantly surrounds her. While it’s hard to relate to actual vampirism, it can easily be substituted for any other mental illness in the book, and how many people feel that same bit of stagnation through the threatening mindgames they face each day. 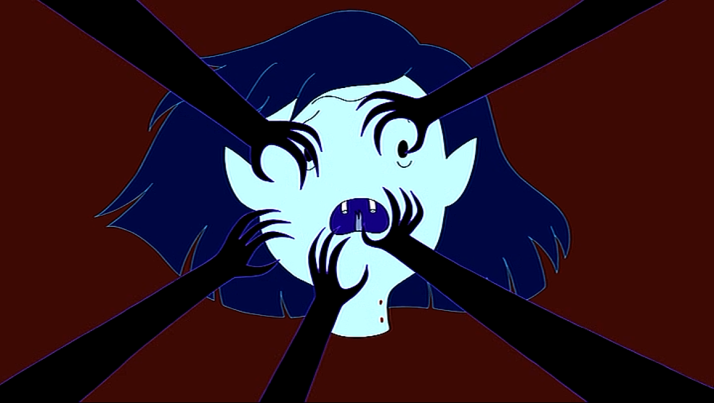 The interactions between PB and Marcy when it comes to the operation sequence are mildly funny in how they subvert pandering to any diehard Bubbline fans, but again, I thought PB’s apathetic nature did kind of squander the importance of the procedure. Granted, I love PB’s moments of not understanding how to interact emotionally with other characters, but this is the one time I would actually like for the two gals to have an honest and direct conversation with each other. It’s funny, because Ako Castuera returned to the writing staff for this episode, and I think her method of writing for Marceline and PB suffers from the same issues that Castuera’s previous Marcy-PB centric episode, Sky Witch, had. While Castuera seems to have no problem writing for Princess Bubblegum individually, I think the way she depicts the relationship between the two girls is especially hollow to the point where it seems like PB doesn’t given a fuck about anything going on around her. I don’t think the gals need to be lovey-dovey and kiss up to each other all the time, but I feel as though such a moment deserves for something a bit more earnest and compassionate.

While I mostly like Finn and Jake’s roles in the episode, I feel like Jake suffers from being way too over-the-top in the beginning. I don’t even hate his role as bad cop, but I think it’s somewhat squandered by the fact that Jake quickly gives up this role and ends up being just as caring and supporting as Finn in the blink of an eye. Obviously he wanted to help his friend in her time of need, but I felt the shift from “let’s go arrest Marceline right this minute because she’s obviously guilty” to “let’s help out our friend Marceline because she’s having personal problems” was way too abrupt. That being said, I did like the interactions between Marceline and Finn, and how Marcy herself isn’t even sure of what may have happened to herself or others. 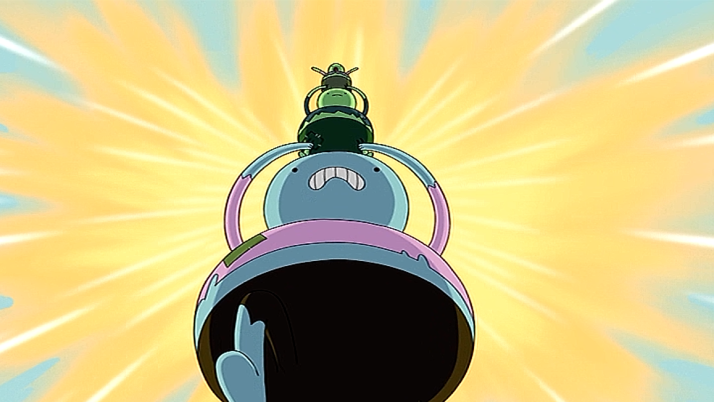 There’s a big presence with side characters in this one, mainly the fat villagers and their leader Cloud Dance. Cloud Dance has a few funny lines revolving around his cows and how they were affected by the vampire bites, though I think the character in general is slightly unremarkable in his voice, personality, and design. He’s portrayed by Kyle Kinane, who I actually had never heard of prior to this episode, though is apparently a voice actor and a comedian. While I’ve never seen Kinane’s work elsewhere, Cloud Dance isn’t really provided humorous dialogue as it is, aside from the moment I mentioned earlier. His character is pretty insignificant, and one I usually tend to forget.

The following nighttime scenes are probably my favorite bits of the episode. Though I’m not really a fan of Marceline’s “arthritis dance” (any attempt to make Marceline a quirky or silly character never really comes off as convincing) the moments Finn and Jake share are both funny and somewhat tense. I love Jake’s ignorant fear of vampires coming into fruition once more, as John DiMaggio puts absolutely all of his energy into Jake’s character. The shots within the cave are eerie and off-putting in the best way possible, with tons of different grotesque and nicely detailed animals scattered throughout. It is strange to see a whole assortment of random, non-speaking animals (has there ever been a normal dog in the series before this point?) but I’m willing to forgive it because every creature depicted looks fantastic. 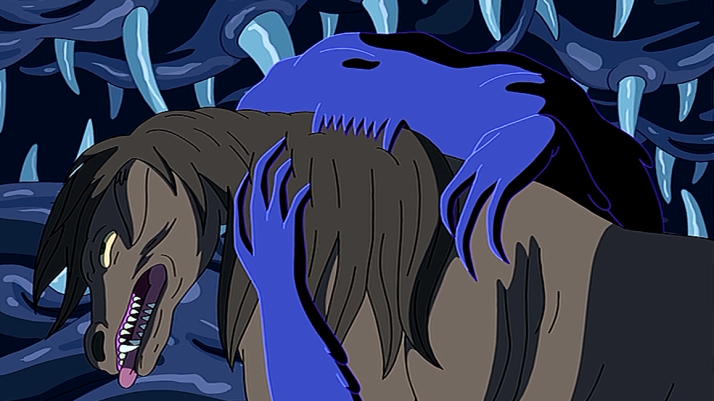 The episode comes to a pretty enticing conclusion; clearly we know Marceline isn’t going to explode, but the way it’s framed, as Finn tries to literally beat the sunrise, is really cool and builds a good amount of hype for the next episode.

Marceline the Vampire Queen does everything it should to set-up for the next handful of episodes, but I think my main problem is just with the tonal shifts and dialogue. Adventure Time has always been good at balancing out drama and comedy, but I almost feel as though this one is trying to forcibly be humorous every chance it gets, even when it means getting in the way of having genuine character moments. This is actually a problem I would end up having with the miniseries and several other episodes within it as a whole, but as is, it is a decently fun start to a mostly fun miniseries. 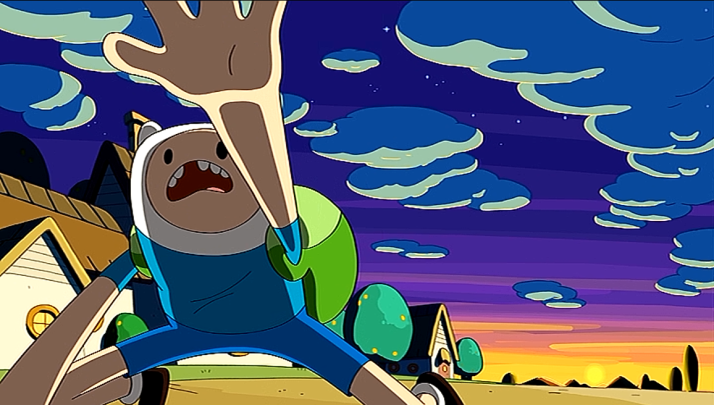 Favorite line: “That’s cool, you guys, but clean this mess also, you bums!”