Death in Bloom is Adventure Time at its funniest: great site gags, good writing and pacing, bizarreness, a pinch of toilet humor, and great chemistry between our main duo and the characters that surround them. I often don’t think of AT as a comedy; of course, good humor is a crucial aspect of the series, but I much more consider it as whimsical fantasy rather than straight-forward comical. An episode like this, however, reminds me of just how funny the show can be, as well as how successful that can make it.

Really great sounding compositions from Casey James Basichis and Tim Kiefer in this episode, especially during the montage sequence.

First of all, the premise is great. The concept is very Regular Show in the sense that our two main heroes screw something up and have to get it fixed through very unusual and outlandish methods. No complaints there though, it’s actually a premise I enjoy watching. It also helps that the plot doesn’t dumb down Finn or Jake at all. Sure, they put donuts and pizza in a plant and poured soda in its bulbs, but Finn and Jake weren’t meant to take care of a plant. They’re meant to slay dragons and save princesses and shit, and that’s proven when they aimlessly travel to the Underworld via Peppermint Butler.

I mentioned in my review of The Real You that Finn’s infatuation with Princess Bubblegum can serve to bring out his bigger character flaws, and while it’s a bit more subtle, it’s shown here as well. Finn is so worried about disappointing PB that he’s willing to travel to the literal Land of the Dead. For a plant. It’s both humorous and heroic, showing his deep dedication to serve Bonnibel in every single way possible, even if it’s something a simple as taking care of some flowers. 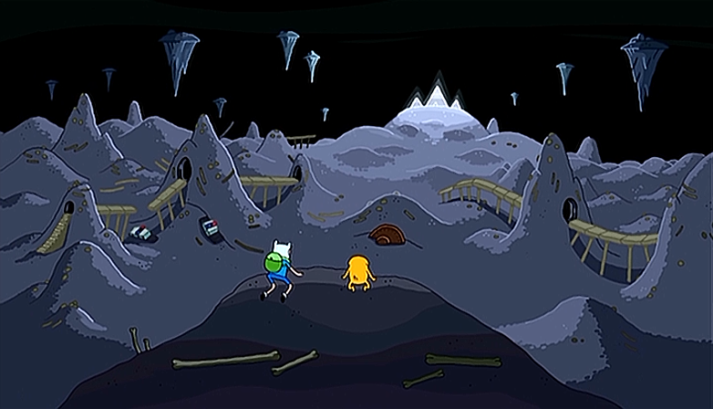 The Land of the Dead is a fascinatingly dark landscape for our heroes to explore. Most of it was designed by Ghostshrimp and Chris Tsirgiotis, who give the Underworld a specifically ominous and dismal feeling, despite its residents being pretty quirky and easily defeated. There’s some really terrific shots, between the beautifully fast pan when Finn and Jake first enter and the strong details on Death’s garden, as well as his actual facial expressions.

Death himself is such a strong presence in this episode. His design is terrific, and Miguel Ferrer’s (God rest his soul) intimidating, yet honest voice are what really give life (metaphorically) to his character. Of course, our two main boys are really what make this a top tier episode. Their interactions are hilarious, from Jake breaking wind in attempts to lighten the mood to the strange reveal of what the Morrow means to Finn’s annoyance with an amnesia-ridden Jake, it’s really just a great episode to enjoy these two immensely enjoyable characters go on a perilous quest.

From their actions with the plant, I think the two of them have learned a lesson in responsibility. There’s also the fact that they probably lie awake at night in fear that Peppermint Butler will steal their flesh, so they’ll most likely think twice the next time they’re asked to plant-sit.

Favorite line: “I don’t know, [the Underworld] wouldn’t be so bad if there weren’t folks trying to eat our skin.”