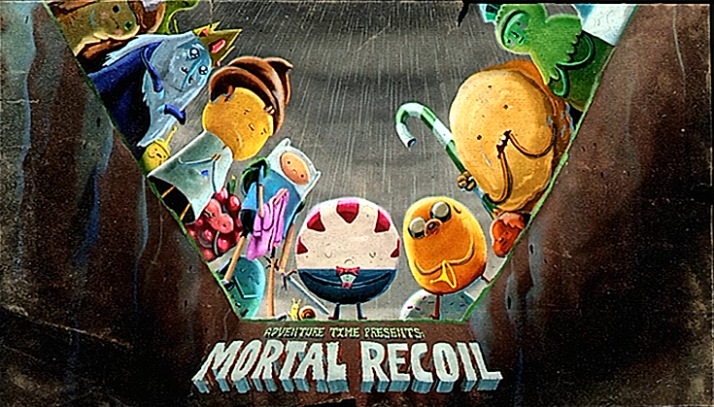 Definitely one of the most chilling title cards in the series.

This episode starts immediately where the last one left off, as we’re treated to a dramatically funny scene featuring Dr. Ice Cream and Nurse Poundcake. “Dramatically funny” is a key adjective in this episode; where Mortal Folly was a mostly intense, fast-paced episode, Mortal Recoil is much slower and blends comedy with horror elements. 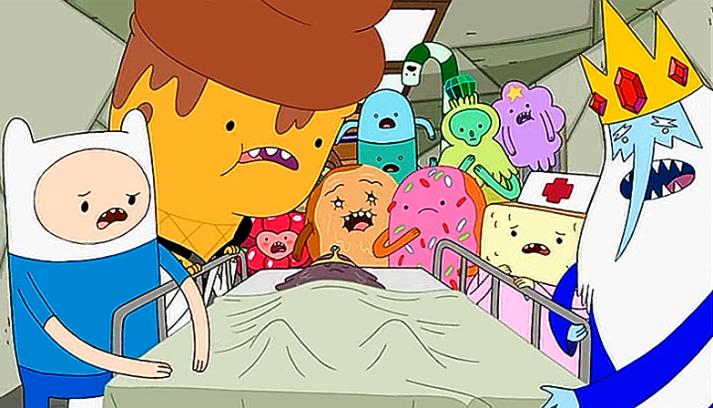 Immediately this one makes up for the mistakes of last episode by making the Ice King beneficial to the plot. His constant interruptions of Finn and Jake earlier bordered on the annoying side, but here his purpose is more to serve the main characters, but not before Finn can get rightfully pissed at him. It’s a bit of a breaking point for Finn to blow up at the IK this way. Finn has treated Ice King as a mild disturbance in the past, but never has he affected Finn or someone he cares about so dearly in such a devastating way. It’s a nice instance of Finn royally chewing him out, and letting off that steam allows for things to gradually improve as the episode continues.

The scenes that follow in PB’s bedroom are straight out of a horror movie, but they’re still played lightly enough to save from complete darkness. It’s sad to see that this is really the first time Finn is truly upfront with his feelings toward Bubblegum, but she’s completely possessed and her true self isn’t conscious at all. The only other time we get to see Finn engage in this emotional release again is in Burning Low, and he does so mostly out of anger and sorrow. Here, he’s doing it to express his genuine care and appreciation for the princess, which again, is sadly squandered by the circumstances of the situation.

Even sadder is Jake’s little booty dance can’t rescue PB from the Lich’s overwhelming presence. Bubblegum is able to absorb massive amounts of power through the fluids Finn gave her, and becomes an entirely new force. This is, of course, when Finn tries to use the sweater to defeat the demonic presence of the Lich once again, but fails this time. Even though Finn confidently holds that his feelings for PB were what helped him defeat the Lich last time, he realizes that love isn’t always the answer to defeating evil, and there’s no guarantee that something that worked fine once will do its job the same way again. Which is where the Ice King comes in with a tale of his wizard eyes, as Finn finally accepts his help and we see the two team up for the very first time. It’s an appropriate fit to watch Ice King and Finn work together civilly for once, and shows just how much the Ice King has evolved from the first instance we saw him. The IK isn’t an evil villain in the slightest anymore. Rather, he’s someone who just wants the attention of the coolest guys in Ooo. 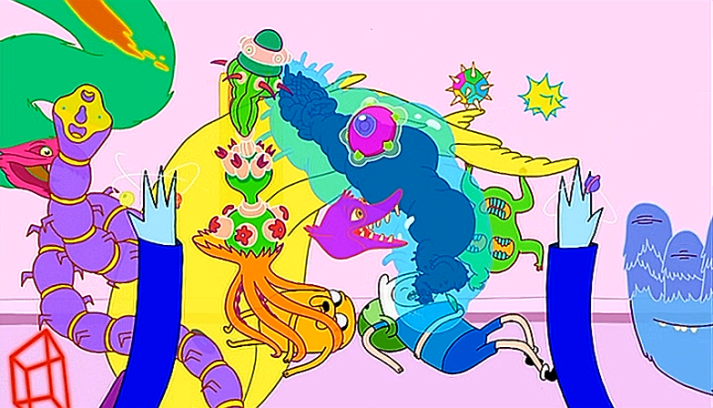 It’s here that Princess Bubblegum literally dies, in an even more aggressive way than the last time. In the end, she’s rebuilt to be thirteen, something that we’re going to explore later on, even if it never really got off it’s feet. The episode ends in what almost feels like a cap to the series, but we’re left with one haunting wave from the Lich possessed snail, signaling for more to come. This episode is really just a terrific showcase of how much the Lich’s introduction has forever changed the history of the show. Sure, the status quo and the way things return back to the main formula a good chunk of the time still remain relatively untouched, but it’s with this episode that I realized that literally anything can happen in Adventure Time. Princess Bubblegum can become thirteen, some plot points may be held and resolved and a later point. It was just a crazy burst of intrigue that left me so excited for the rest of the series. I began to really appreciate that element of surprise that came with every AT episode. In the past, any surprises or twists that came with the plot could be easily brushed off as something that was contained to just the singular episode, but Mortal Recoil introduced us to the idea that anything can come back at any point, and the fate of the characters could be altered at any given moment. This is all conducted by the intro of the show’s greatest evil, and one that would continue to affect the existence of Ooo much more down the line.

Welp, that’s season two folks! It’s been a lot of fun covering these episodes the last couple months, and really only increases my interest and love of my all-time favorite show. Thanks to everyone who has been reading (special shoutout to fellow commentators Stuped1811 and LilPotato911!), this isn’t really a project I’m doing for copious amounts of viewers, but it always helps to know that people are reading! The full season two review and a bonus mini-review should be out later this week, but besides that, I’ll see y’all for season three!