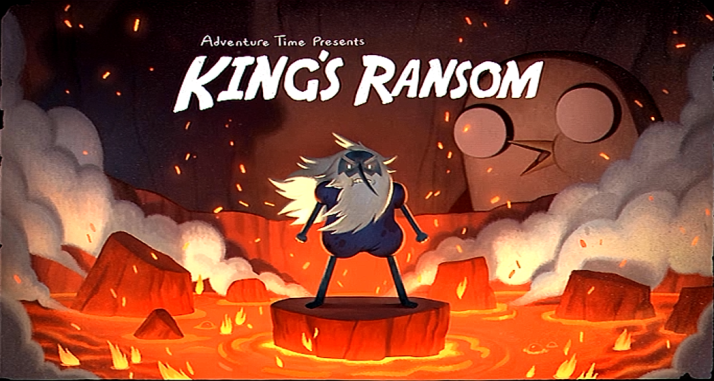 The oddest thing about King’s Ransom to me is that it centers around Ice King’s journey into finding the missing Gunter, which is the exact same plot of the Ice King comic miniseries that was released FIVE DAYS after this episode had aired. I mean, it’s likely a coincidence, but just strikes me as especially odd considering that storyboard artist Emily Partridge ended up being the head writer for said miniseries, and whether or not it’s canon, I can imagine that anyone who picked up Ice King Issue #1 that week suffered from a serious case of deja-vu. But, regardless, the episode itself proves to be a lot of fun, and one that works mostly on simplicity as a means of success. And who better than to capture the charming, lovely simplicity of the main cast than Hanna K. Nyström?

Nyström only just began as a storyboard artist in season seven, but her ability to empathize and understand these characters, as well as her strong efforts in storytelling, have truly led her to be one of my favorite board artists in the latter half of the series. Like Kent Osborne, Nyström has a way of depicting the cast in such a non-cynical and loving way that is just absolutely irresistible. It’s a method that may have been a bit too sweet early on in the series, but as our main characters begin to change and evolve, it’s more than welcomed as an accurate form of development. Joining her at the helm of this one is Andres Salaff, who doesn’t have a very big portfolio in the storyboarding realm aside from this episode and The Music Hole, but his efforts in those two do reinforce his equal ability to understand the characters on a personal level. Hell, he was a supervising director for two seasons, after all!

Following up from that whole ramble, a lot of the enjoyment from this episode comes from the absolutely delightful interactions between Finn, Jake, and Ice King. I certainly view King’s Ransom as a big turning point in the relationship between the boys and Ice King. By this point in time, Finn has almost fully warmed up to the IK. In fact, he shows absolutely no sign of being angry or frustrated by Ice King, even when he’s directly inconveniencing the brothers. Of course, Jake still hasn’t fully warmed up to Ice King’s often manic behavior, and is noticeably upset with him, at least at first. Jake slowly begins to sympathize with Ice King as the episode progresses, mostly in a way that goes back to Ice King’s previously sentiment that Gunter is comparable to being Finn’s Jake (or vice-versa). Jake likely identifies in the sweetness behind Ice King and Gunter’s relationship, in the same way that Jake would do anything to save his little bro in his time of need (humorously, Ice King might actually be even more dedicated in his efforts than Jake would. We all remember Power Animal, right?) so he’s able to look at the IK from a more sympathetic outlook. It would still take a bit more time for Jake to fully treat the guy as an equal, but this is a HUGE step for him in his behavior. 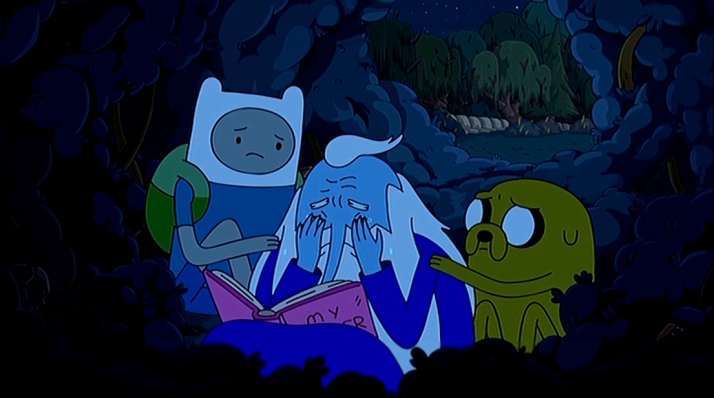 While I don’t mean to undermine some terrific conflict episodes between the brothers and their overly clingy compadre, it is really cool to see a straightforward adventure-themed episode with all three boys working together in harmony. A lot of the fun with this one does derives from all of the back-and-forth interactions between the boys, and the circumstances that befall them. This is also an episode that is particularly silly in its execution of particular elements; the literal fox chase that involves Jake multiplying into several identical (non-sentient) Jakes, Mr. Fox’s disturbance in his own lonely bedroom, the added bit of lore to Ice King that he begins to look more like Simon whenever his crown is miles away from him, and various other visual gags that are just delightful (the return of the Jake car got me particularly giddy). The concept in general, while treated in a genuine way, is equally kind of hilarious when you start to think about it. Ice King is searching specifically for “Gunter”, while there are hundreds of other penguins that take refuge in his own kingdom. I didn’t even think he could tell the difference half of the time.

Though it’s silly, a lot of the episode does work off of your emotional investment in the situation, which again, I believe to be genuine. You really get the feeling that Ice King does care about Gunter, beyond being just the archetypal sidekick for his muse. It’s probably one of his most heroic displays to date, and he constantly puts himself in dire situations, just for the sake of saving his little buddy. While Ice King’s entire existence is based around the life of a man who cared very little for his pupil, IK proves to be an improvement just by showing that he does care in one way, shape or form. Of course, some of this did read to me as a bit schmaltzy at first, but it was quickly negated when we get to the end.

I probably sound redundant getting to this next point, but I once again think it’s SO IMPORTANT that Ice King willingly almost gives up Gunter at the sight of a beautiful woman. While I’m totally for getting bits and hints of Ice King being able to develop over a period of time, it is once again an important reminder that Ice King will never fully change as long as the crown holds power over him. And that’s alright! Ice King’s apathy and failure to understand social connections are what made him great to begin with, and while I love the connections of understanding and love that he develops throughout the series, it great that the show is still dedicated to showing off his insanity and selfishness despite it all. As for the reveal of Betty, it was pretty fine. It leaves a bit of intrigue for Broke His Crown, but doesn’t really do much for me here. I think the reveal in general was pretty obvious for anyone watching, and the Herpich-styled tin can voice just kind of felt like an excuse for how Lena Dunham couldn’t make it into the booth at the time. I do love the fakeout, however, where Ice King begins to stutter and finally calls her “be-autiful” instead of “Betty.” Once again, it’s important to remember this guy has lost his mind, and there’s very few things that can change that at this point in time.

But overall, King’s Ransom is a lot of fun. Definitely not one of the stronger season seven episodes, but one that’s delightful regardless. It’s so weird to think that the last episode based around Finn, Jake, and Ice King’s relationship was Play Date, so it’s exceptionally rewarding that this episode simultaneously gets back to the basics, while also showing clear signs of evolution. This attitude surrounding the Ice King would only continue to shift as time went on, especially within this season in general. 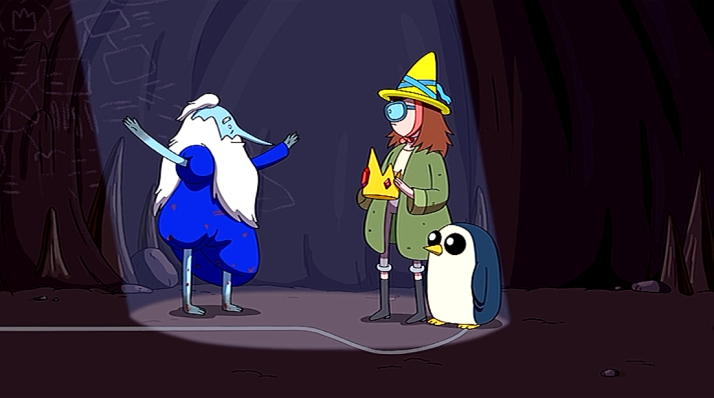 Favorite line: “The last time I saw Gunter, I was yelling at him for pooting. But it wasn’t Gunter who pooted. It was me!”