Elements is the last miniseries that Adventure Time has ever produced, and it really closed things up with a bang. I’ve debated up to this point whether I think that Islands or Elements is the better miniseries, and I’m still slightly torn. I think I definitely have the stronger emotional connection to Islands, but Elements as a whole is the least problematic miniseries as a whole. While I have a ton of problems with Stakes and a few minor ones with Islands, Elements has very few actual issues that I can pinpoint. While Stakes and Islands had their weaker entries, Elements really doesn’t have any duds on its hands. It’s weakest episodes mainly are limited to being entertaining on a base level, but still, they’re at the very least entertaining.

The opening of Elements is AMAZING, and quite possibly my favorite alternate opening that AT has ever put out. There’s just sooo much going on in it. While I previously complained that Islands‘ intro was just limited to a long-pan of the ocean that didn’t look all that spectacular, Elements gives us a glimpse into each of the elementified kingdoms (with the exception of the Fire Kingdom) and even adds a bit of backstory to the events of Elements as a whole. There’s a brief bit of foreshadowing with a happy LSP floating through the literal elemental apocalypse. There’s also that really neat shot of Fern being fully consumed by the candy wave; everything is presented in such a quick and tense matter that there’s a ton to absorb in such a short amount of time. The downside is that, while Science SARU is usually top-notch when it comes to guest animation, there are some sequences that are awkwardly storyboarded that make it feel slightly wonky in execution. Hanna K. boarded this one, and while she usually is pretty competent from an artistic front, there are some scenes (namely the dynamic pan up towards Patience) that just feel a little sloppy. But, it’s so fast-paced that you barely even notice, and only really sticks out upon actual analysis. I also appreciate how cryptic the nature of the intro is in general; as usual, this miniseries lists off four main heroes, but Lumpy Space Princess’s role is barely even alluded to. It really keeps things interesting in that sense. I’m usually not a fan of PB’s singing voice all that much, but you can almost tell how much fun Hynden Walch is having singing that classic AT tune. It’s kind of hard to resist.

Oh, and holy shit, are those title cards beautiful! These have got to be some of my favorites in the series, with each title card shifting the main character of focus more and more to the left, which makes for a really neat looking banner. Joy Ang painted half of them, and while her art is always beautiful, Benjamin Anders, who joined the design team this season, really shines with his work in designing and painting a good majority of the cards.

Like Islands and Stakes, Elements features a main, ongoing story, but there’s also A LOT going on beyond the surface as well. You have the mysterious and often hostile relationship between Betty and Ice King, the constant tensions between the four kingdoms (of course, it’s only natural that the Fire Nation are the ones to attack), Lumpy Space Princess’s role as a hero, and the subtle, but still very much prominent, development of Finn and Jake’s relationship with each other. While F&J’s strengthened bond isn’t focused on as much as those other elements (pun intended), I think it’s undoubtedly this miniseries’ strongest arc. The passion behind Finn and Jake’s brotherhood is something that has been hit on numerous times throughout the run of the series, with great standout entries such as Storytelling, Morituri Te Saltutamus, Sons of Mars, Dungeon Train, and Don’t Look, but never has it been more apparent how much they truly appreciate each other. Cloudy is, without a doubt, one of the best episodes Adventure Time has ever put out because it really emphasizes what makes the series so lovable to begin with: the simplicity of Finn and Jake and their friendship. I say simplicity not to undermine the complexities of their individual characters, but because their friendship is not bogged down by their baggage. Even with the weight of the world on their shoulders, Finn and Jake still manage to get by in their ability to enjoy each other’s presence and take delight in the simpler things. Cloudy had the potential to be a dark and grim entry, but it instead chooses to be a celebration of the positivity of our two heroes. It ultimately makes it all the more poignant when Jake is separated from Finn. We’ve seen Finn struggle without Jake plenty of times before, but the timing of their mutual trust that everything will end up alright makes consequences all the more dire, which in turn makes their reunion all the more heartwarming.

A surprising feat for this miniseries is that it also features Lumpy Space Princess at her absolute best. It’s really cool how such a shallow character can be incorporated into the overall lore of AT in a meaningful and believable fashion. It’s also neat that her development comes full circle by the end of Elements. LSP has always been a character that has lived in stagnancy and has been unable to actually grow because of the way she is and how she will always be. Here, Elements allows for her to be accepted and celebrated for who she is, rather than what society wants her to be, and I think that’s pretty swell. I’m usually fairly critical of LSP’s role in nearly any episode she’s in, but I really only have one nitpick for her arc in general: the way each writer handles her character can be somewhat inconsistent. I’ve mentioned before that a hidden talent of Seo Kim is portraying Lumpy Space Princess as sympathetic and thoughtfully as possible, and she’s really at her most likable in Hero Heart. She’s just as humorous in the following episode, but Steve Wolfhard portrays her as much more cold and detached from wanting to have any role in helping the people of Ooo. It feels a little bit of a drastic shift, but meh, it’s not something that particularly bothers me because I do appreciate each of these LSP entries.

The ongoing storyline featuring the elementified kingdoms is handled pretty successfully. While some of these individual explorations are (appropriately) silly, like the party-crazy Slime Kingdom, others are used as a deeper dive into more challenging allegories, like the question of whether permanent happiness is logical or not, or how easily controlled anger and rage truly are. There’s a nice balance of drama and fun mixed into it all, with the Candy and Slime Kingdom’s being used to showcase the comedy and fun of the shift, while the Fire and Ice Kingdom are used to emphasize how truly bleak this essential apocalypse is.

Then there’s Betty and Ice King, who work off of each other pretty greatly, though with some weak spots along the way. I’ll say this, I think Elements may be the best stories for Ice King and Betty’s characters individually. Ice King is still the lovable goofball we’ve come to love, but I really love how much of a team player he is in this. Ice King tagging along for Finn and Jake’s adventures has always left him either ignored or useless, but here, he’s actually one of the most competent members. Not only did he manage to avoid getting transformed entirely on his own (which may partially be a result of his crown) but he’s the only one who stays entirely focused on the central mission throughout this whole journey. Even Finn, who is understandably upset after losing Jake, is given a bit of reality check from ol Simon. It really shows how far his character has come and how truly devoted he is to being a hero in his own right. Betty is similarly terrific, for entirely different reasons. For one, she has a new voice actor that actually seems to care about the world itself, which helps for her character to truly shine through. Betty is still thoroughly sympathetic, and perhaps more-so than ever. I’ve mentioned this before, but even though she’s insane, she’s understandably insane, and it’s easy to get behind her woes knowing everything she’s been through. Not to mention she also has terrific comedic timing when interacting with other characters, such as Finn. It’s a perfect balance of wanting Betty to succeed, but also wanting Ice King to thrive in his own element. My few problems with their interactions stem from the fact that I think the pacing for Betty’s turmoil could have been panned out slightly better. It appears that she’s had it planned all along that she wants to steal the Enchiridion to get Simon back, but she has a brief moment of understanding and connectedness with Ice King in Hero Heart, which ultimately ends with her deciding to go through with her plan all along. It feels a bit out of place; I get that the endgoal was to make Betty’s betrayal a surprise, but I feel as though it allowed for false implications of development to still be executed and ultimately feel wasted by the end of it. Outside of Hero Heart, however, I thought everything moved relatively smoothly, so I’m nitpicking a bit. 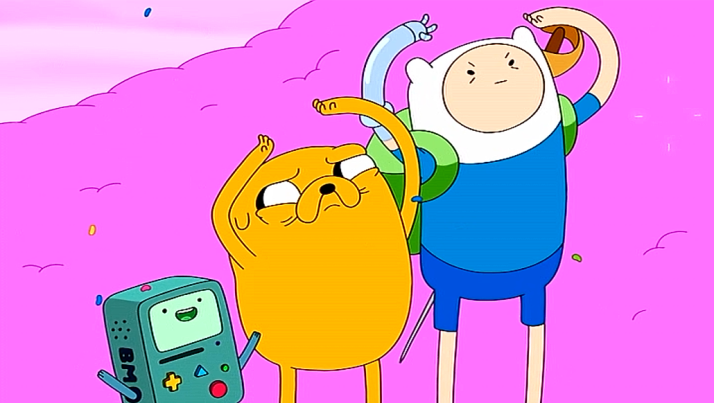 As for the rest of Elements, you’ll mostly find myself nitpicking a few other issues that are barely really issues. I think the elementified versions of the characters are slightly gimmick-y in who is affected (Sweet P. is not, but Gunther is; Finn’s flame shield doesn’t protect him, but Cinnamon Bun’s weaker shield does) as well as the fact that everyone has conveniently clever names for their transition, but it’s all in the spirit of suspension of disbelief, and to harp on the latter point would just show how soulless and not fun I truly am. I also believe that the first half of Elements is objectively better than the second half, but that’s not to say that those last four episodes are bad by any means. Elements just started out unbelievably strong and I don’t think those first few entries are met in quality by the second half.

I typically don’t talk about storyboard teams during the miniseries(s) because pretty much every staff member gets a chance to shine, but something still baffles me about Elements… where was Tom Herpich? Steve Wolfhard had a guest spot with Laura Knetzger in Winter Light, and then worked on Skyhooks II entirely on his own. Was Herpich just busy at the time, or did he purposely opt-out of storyboarding for the miniseries? I dunno, it’s a strange absence that really just has me scratching my head.

It’s no wonder that season eight is such a renaissance period for past fans of the series, as it really just gets better and better as it goes along, and Elements is a prime example of that. It’s a celebration of everything that the series started out as and everything it has become, allowing for non-stop fun and non-stop lore to blend in seamlessly. I’m overall excited to move on to a non-miniseries, because Islands and Elements have basically consumed my life for the past few months, but overall I was just really happy to get to rewatch these two landmark AT entries once more. Might be a controversial statement, but I truly do think that Islands and Elements may be the two best batches of episodes that the series has EVER put out.