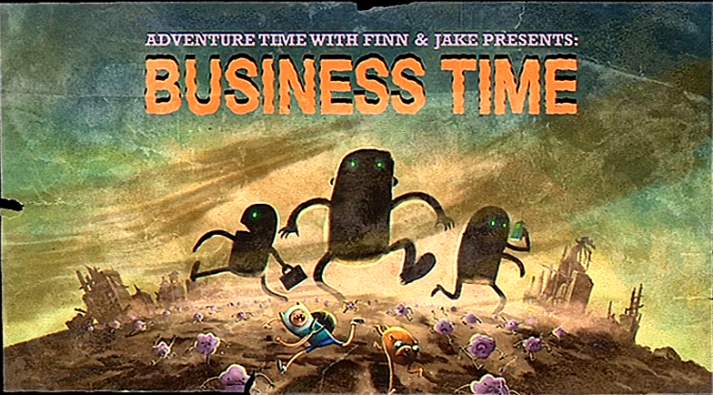 The episode begins with Finn and Jake lighting flame guns (with the help of their pal Flambo!) and thawing out icebergs in order to build their coveted gauntlet dock, a dock that is also a gauntlet. During their scavenging, they melt through an iceberg and find four men dressed in business clothes.

It’s worth noting that this is the first episode to deal with the post post-apocalyptic elements of “Adventure Time”, as the Businessmen were likely frozen sometime during the war. Pendleton Ward himself said that this was the episode that kickstarted the idea that AT took place in a world after the apocalypse, and that they just kinda stuck with it after that. I didn’t really make anything of it at the time I first saw it, but watching it on subsequent viewings has added a much more interesting twist toward the episode. 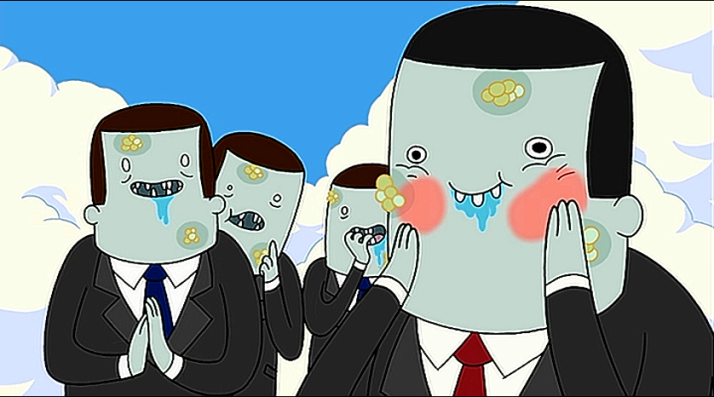 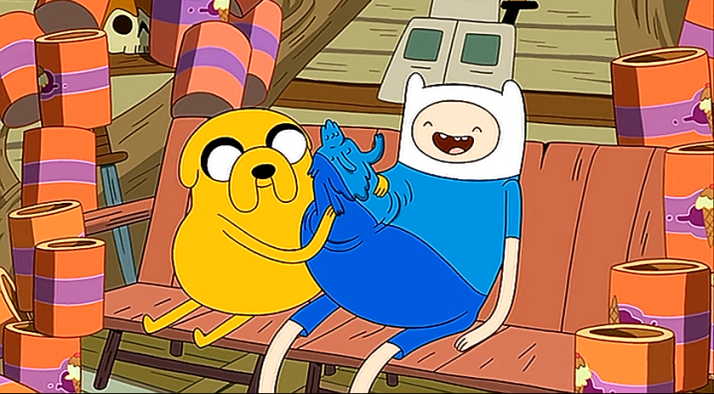 The Businessmen begin doing everything for our duo as the two just sit around and eat ice cream while playing video games on BMO. Hey, it’s BMO! Sorta weird how his first appearance doesn’t even include a speaking role. Finn and Jake get really obese and lazy from eating so much ice cream, as they realize that the Businessmen are sucking up the Fluffy People in some big vacuum contraption. The boys realize it may be time to get some action, and confront the Businessmen. They say they want to suck everyone up into their “care sack” where they plan on protecting everyone from danger, which is somewhat psychotic, but hey, they’ve been in an iceberg for 1,000 years. Finn fires them for their actions and they have a hissy fit, as they begin to go crazy. While trying to suck up Jake, his fat clogs up the machine, and it eventually bursts. Finn rehires the Businessmen and orders to freeze themselves once more. The boys decide to go back to adventuring and Jake shapeshifts back to his normal body weight and Finn attempts to do the same, but nothing happens. The end.

Besides the brief apocalyptic references throughout, this episode’s a bit of a bore. The Businessmen are quirky and a bit amusing, but aside from them, this episode’s somewhat devoid of good humor. In addition, an episode that involves Finn and Jake just kinda lazily sitting around while other characters participate in likely more entertaining adventures off-screen isn’t an especially promising setup. It’s a bit of a slow one from start to finish, and doesn’t really mix well with how energetic and upbeat the past seven episodes have been. Overall, a pretty lackluster and forgettable episode.