I was somewhat nervous for this episode when it was first announced, because I really figured that an entire episode devoted to Martin would try and portray the character in some sort of tragic light. While the later episode Min & Marty managed to do so with great success, I was unsure about how much sympathy I actually wanted to feel for Martin’s character, and really liked how refreshingly committed this season has been in showcasing Martin’s awful attributes. Thus, On the Lam is just the kind of episode I wanted Martin to be the star of. It’s primarily a really fun, adventure-packed episode that capitalizes on how Martin charms and manipulates his way to success, with little remorse in the slightest of the people of whom he hurts in the process.

It’s nice to get not only one, but two alien societies in the course of two episodes! This one isn’t as ambitious or unique as the one we saw in Orgalorg, but it does features a wide variety of some neat looking aliens. I especially like the koala people, mostly for their cuteness factor. This one does a really great job of defining just how Martin is able to survive through countless planets, worlds, and galaxies. The way I see it, he has two main skill sets:

The second is the aspect that plays the biggest part in this one, as Martin tricks the koala-like alien society into thinking that he’s practically a God. Or at least, he believes that they think so. Even with the idea in mind that Martin literally abandoned his son and cares little about that aspect, he still manages to be surprising in just how shitty he is. After tricking his alien allies into thinking that he is on their side, Martin immediately sells the moth that has been nurturing the alien society and presumably keeping them alive. And even after bonding with his new little friend, Martin 2, Martin eventually ditches the little guy after the two are faced with certain dangers. 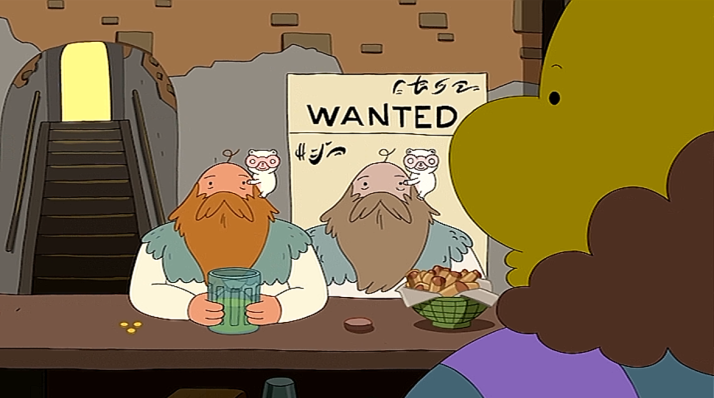 The connection between Martin and Martin 2 was a nice touch to carry through the episode as kind of a misleading story that would often lead to a sweet ending for any other character, but this is Martin we’re talking about. The parallels between Martin and Finn’s relationship and the connection between Martin 1 and 2 are what really adds to said story. I even like how Martin explains that “if I’m going to heroically save your life, I’m going to need to take drastic action!” Despite the fact that Martin describes his past life as a “pile of mush” earlier in the episode, he clearly remembers how he did have one moment of heroism back in the day when he saved his son from certain death. Of course, the same logic does not apply now, because even though Martin tries relive the same heroic actions he embarked on in the past, they’re quickly squandered by the fact that he flees the second he has an opportunity to do so. I do wonder what compelled his decision to at least try to initially save Martin 2. I get the feeling that it was either because Martin wanted to convince himself that he’s a hero for his own selfish gains, or because he simply doesn’t care if he lives or dies. It could very likely be the latter; no matter where Martin runs off to, he keeps running into himself and is unable to truly keep moving forward when he is constantly turning the world against himself. I get the feeling that Martin acknowledges and accepts that, sooner or later, he’s not going to have any place left to run to. And while he does have that in mind, he’ll still take any opportunity he can to keep going and to spoil himself with all the riches that he can obtain, while simultaneously ruining everything and everyone he comes into contact with in the process. Poor Martin 2.

This one is packed with lots of fun moments. A lot of the humor does derive from just how relentlessly awful and charismatic Martin is as a character. Other funny moments include the bartender who took an awfully long time to piece together that Martin was a criminal, and the hauling turtle that casually delivers expository dialogue before he hauls garbage. I think the only real annoyance I had with this one is the fact that Martin 2 was randomly revealed to be super old in the last leg of the episode. It always bothers me when shows pull sight gags like these; why weren’t the wrinkles and liver spots on Martin 2 visible throughout the episode? These twists always feel somewhat lazy to me, though I think Martin 2 being the actual rebel leader was a genuinely good one, just without the added attributes that didn’t even really need to be a part of the episode.

So, On the Lam doesn’t aim at developing or touching on the history of Martin’s character, but instead chooses to have fun with him, which is just as rewarding. It’s admittedly a bit shallow, because the general gist of the story and the humor in general predominately revolve around Martin’s shittiness, but I enjoy Martin and he’s tons of fun to be with, so I don’t mind it as much. Definitely gets a pass in my book.

Favorite line: “I hate this city, and I love hauling! I should probably go do something…”