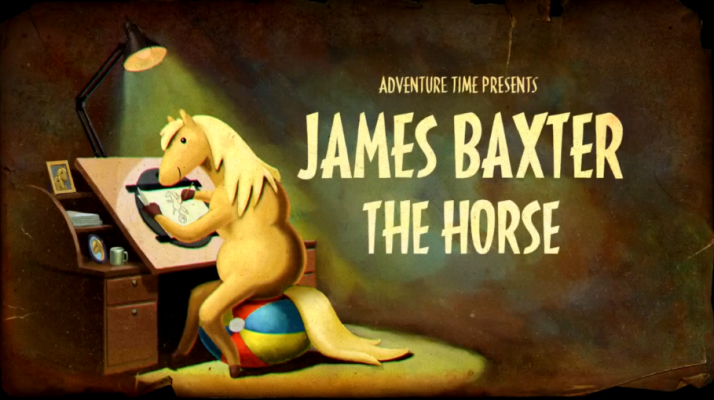 During his time at CalArts, Pen Ward had a special guest lecture by James Baxter, an animator who worked with both Disney and DreamWorks. Someone in the lecture asked James Baxter to draw a horse on top of a beach ball, to which James Baxter declined, but the idea of a horse on a ball stuck with Ward regardless. Which is why James Baxter the Horse stars Ward in a rare position at the storyboarding helm, because it turns out to be a pretty personal story in regards to being inspired by someone else’s work, but trying to make your own unique content out of it. And for the most part, I think it works. 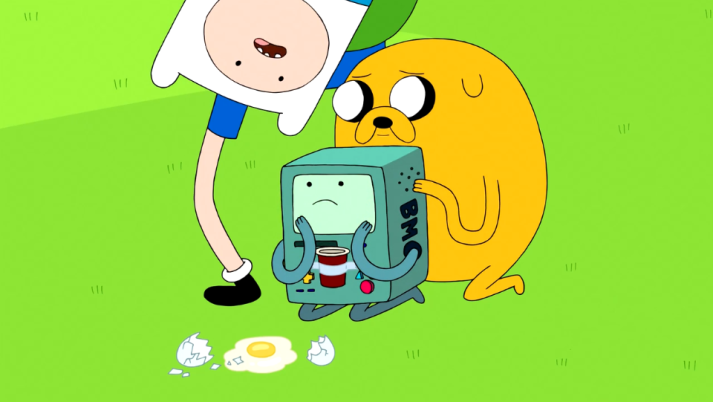 The beginning starts off pretty great with BMO’s pregnant song. Again, this is right after Rebecca Sugar left, so most of the songs following her departure aren’t exactly catchy or memorable, but this one is at least funny. While Finn and Jake try to cheer up BMO she breaks her egg, James Baxter appears and makes everything better with his beach ball routine. The real life James Baxter actually assisted with some of the animation in this episode, mainly the bits where James Baxter rolls on the beach ball, and man, is it a fluid breath of fresh air! Not that AT animation typically looks bad, per se, but you never really expect anything particularly smooth or fluid in terms of character movement. Baxter himself voices his horse counterpart as well, and it provides for a really enjoyably silly running gag throughout the course of the episode.

I think that’s how you can describe the entirety of the episode for the most part: enjoyably silly. I mentioned in my last review that Princess Potluck felt like an episode that was meandered by a plot that seemed as insignificant as an episode from season one, but I think this episode is able to also capture the spirit of the first season in a pretty solid way. Ward is far from my favorite boarder on the show; I have oodles of respect for the guy, but I think he’s more of a storyteller than an actually great writer. And his drawings, while perfectly serviceable, are very simplistic depictions of our main heroes that we’re used to seeing everywhere in AT media. But that being said, I think most of it works with the actual episode. There are moments of stilted dialogue and awkwardness, but it calls for some surrealistic laughs at times. Like the bit where Jake propels Finn into the air to kick the ghost as Finn and Jake randomly get coated in milk. Also, there’s just inexplicably no background music during this sequence. Ward has always been on the more random and silly side, and it’s a style that doesn’t really call for some of the funnier or more memorable pieces from the series, but it’s a style that’s definitely charming and likable regardless. It’s just like Rainy Day Daydream, another episode boarded by Ward that I don’t really think is downright hilarious or terrific or anything, but there’s something so delightful about it regardless. 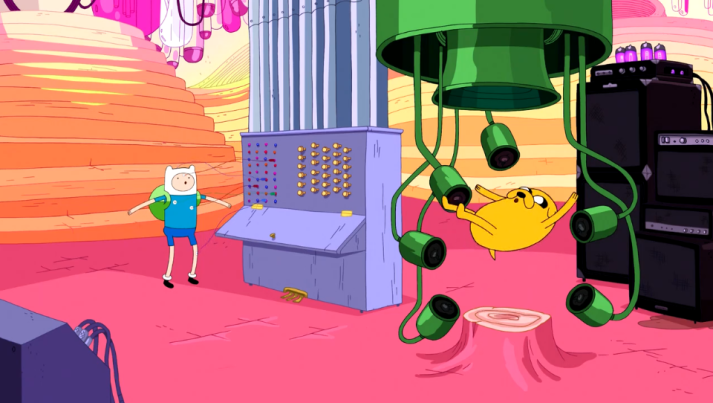 Pairing Ward with Somvilay was actually a pretty good choice in my mind. I think it’s fucking redundant at this point to keep bringing up issues with Somvilay’s drawings, because let’s face it, I literally feel that way about every single episode he has boarded thus far. From now on, I’m only going to bring it up if it poses a large issue with the episode itself, which there are some of down the line. Actual drawings aside, I think Somvilay’s simplistic character depictions and focus on wacky non-sequiturs actually really match well with what Ward was going for (there’s a ton of w’s in that last sentence, woah). I like the little added Somvilayisms, like Finn handing Jake his clipboard just to carry across an animated line of dialogue and then retrieving it back. Also, moments such as Finn and Jake disturbing the funeral and making noises towards the little girl are more direct methods of comedy, but two that play off pretty well and do make me laugh.

A good portion of the episode is watching Finn and Jake embark on this journey to create something as great as James Baxter has, and it’s pretty cool to connect the dots with Pen Ward in Finn and Jake’s position. It seems pretty clear that Ward has a ton of respect for Baxter himself, so he probably wanted to create something as great as he was able to, but always felt inferior and that he was never able to match Baxter’s standards. Ward instead tried to create something different that also appeared to people’s interests and what they like to see, which worked out for him, but his work still probably wasn’t looked at as quite as good as James Baxter’s. What this episode sets to point out is that, even if your work isn’t technically superior to another’s, you should still try and make other people happy with your talents. You shouldn’t try endlessly to recreate the magic that another person has invented, but instead try and create your own unique spin on already existing properties. I don’t know how many of the kiddies picked up on this one, but it’s a neat little message to carry across, and one that is particularly sweet. 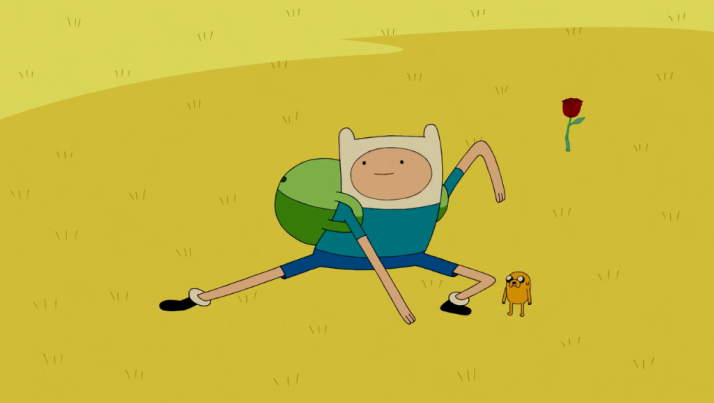 The backgrounds in this one are great! Again, a lot of nice skies and scenery to chew on. This is an episode that is featured pretty heavily in the Art of Ooo book, for good reasons. I like the simplicity of some of the Grassland scenes, as well as the dope-looking factory with its many colors and layers. Also, this is a really design-heavy episode. There’s James Baxter, the hitchhiker ghost, the furry people in the forest, the grieving family, and so on. It’s always nice to have a group of new background characters, a feat that is still unmatched by Ocarina, but one that makes the episode feel more inventive and that more time was put into the smaller details.

I don’t really have much more to say besides the fact that, well, it’s fun! Nothing particularly special, but it’s a sweet little episode that takes the time to channel a more personal story over the increasingly wild Land of Ooo. It’s always very special to get an episode boarded by Ward, which only happens every once in a blue moon. I’m glad he had a crucial part on this one, and I’m glad he took the time to share his story with the viewers of AT. All I know is that I could watch that scene of James Baxter riding into the sunset all day long if I wanted to. 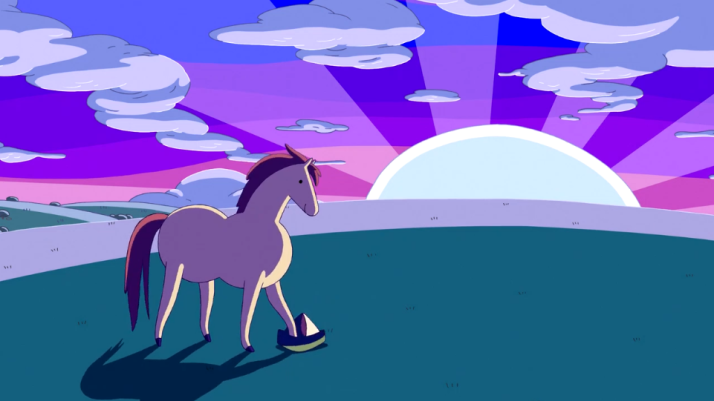