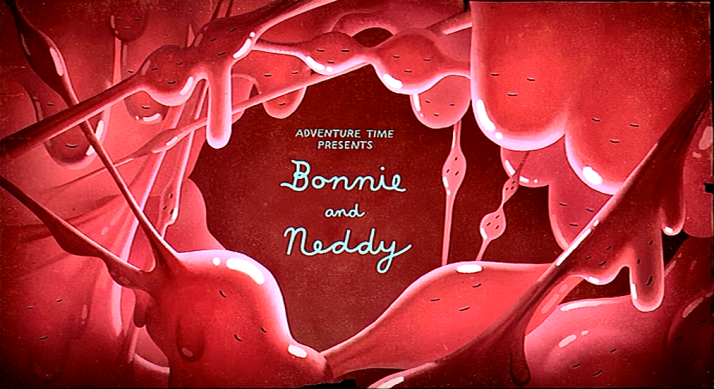 Bonnie & Neddy is no where near as big and epic as its season premiere predecessors. Though, that’s to be expected: after the satisfying conclusion of season six, this premiere didn’t have any big cliffhanger to work off of, but there were a few lingering plot threads remaining in season six that this episode carries forward. It’s a pretty decent introduction to King of Ooo’s new reign as princess, along with a cute and potentially complex backstory for Princess Bubblegum.

I’ll dig into the meat of this one first: the backstory of Bonnie and Neddy. While not as captivating as Finn, Marceline, or even Jake’s past history, Bubblegum’s origin story is simple and sweet. After seeing that blob from Simon & Marcy, and for the five people that actually played through Explore the Dungeon Because I DON’T KNOW! in its entirety, (sorry, that was mean) it became pretty clear that PB was some kind of manifestation of said blob, and it’s cool to see how natural and uncomplicated her actual “birth” came about. It is interesting, however, that Bonnie and Neddy are the only two children of the Mother Gum that we ever see in the series. Of course, we eventually end up meeting PB’s “relatives”, but what happened to the other gum children that dropped from the Mother Gum? The Explore the Dungeon game explains (if we are considering it canon) that PB has been protecting the Mother Gum by herself for years, so why were others not spawn from the gum? Again, this is under the circumstances that a game is being considered canon to the story, but I also feel like there’s a missing link to the story regarding the other brothers and sisters that PB spent her time with. Nice to see that this is where her desire to build the Candy Kingdom came from, however.

Regardless, we’re treated to the sweet weirdo Neddy, who clearly seemed to suffer some trauma upon his birth. I think a good amount of backlash was directed at this episode for introducing Neddy so late into the series after never being mentioned prior to this moment, but it seems exactly like Princess Bubblegum to keep the identity of her brother in secrecy so absolutely no one would bother him. I have no problem buying into the fact that Bubblegum would periodically check up on Neddy off-screen. Neddy’s voice is shrill and unpleasant, though not necessarily at the expense of the viewer, at least in my eyes (or ears). Rather than coming off as irritating, Neddy’s cries were helpful elements to show the tragedy of his situation. I dunno, there was something really quite sad about the way he was presented; I think the fact that Neddy doesn’t speak adds a lot to his character, as we never truly know what he’s going through or why he’s terrified. He’s a character I feel sympathy primarily because of the fact that he never really had a choice of whether to be brave or not. Neddy was born into pain, and likely consistently afraid of reliving that pain because of it. 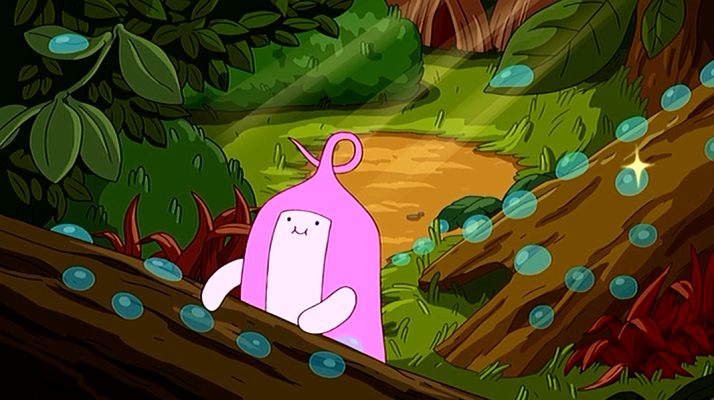 Thus, I think the relationship between PB and Neddy is rather nicely presented. I like that Princess Bubblegum’s inability to change other people comes into play once again. Along with Lemongrab, PB doesn’t want to alter Neddy’s behavior and try to change him – she knows what he’s comfortable with and what makes him happy, and that’s all that truly matters to her. The message of “people get built different. We don’t need to figure it out, we just need to respect it,” is a genuinely good one to live by. Though, I do wonder if Bubblegum truly did all that she could for Neddy. I mean, was Neddy really a lost cause, destined to suck on a sappy tree branch for all of his eternity, or was his potential and ability to live out a quality lifestyles squandered by the fact that Bonnie never attempted to release him from said comfort zone? And was her decision somewhat selfish, considering that she used Neddy’s sap sucking abilities as a foundation for her kingdom to thrive off of? I don’t really lean especially hard on any end of the spectrum; I’m kind of all for the idea that people should be able to live comfortably and happily in their own little state of bliss, but I also question whether or not Princess Bubblegum actually tried to help conquer or alleviate Neddy’s fears and instead chose to leave them to be suppressed. It’s a consistent part of Bonnibel’s character to not directly try to “treat” the close people around her who are different, and interesting to consider when it comes to how orthodox her response to these issues are. Whether it was at the intention of the episode, it is interesting regardless.

The rest of Bonnie & Neddy is a bit clunky in some areas. I dunno if it was just weird getting back into the booth at the start of season seven, but some of Finn and Jake’s lines come off as especially wooden and stiff. I usually NEVER have this complaint about the two characters, so I don’t know if Jeremy Shada and John DiMaggio were just struggling with the dialogue that Herpich and Wolfhard provided for them, or if they just simply had been away from the characters for a while. Finn’s line, “he really blizzed up all the slizz,” sounds remarkably unenergetic for the typically hammy and over-the-top character. I also thought the humor in this one was a bit weak, and only really started to pick up during Wolfhard’s bits. I like Jake stretching out of his armor instead of just simply removing it, and the bird who gives Neddy an attitude is a gif I’ve been in search of for far to long. The King of Ooo is up to his typical douchebaggery, but he isn’t as funny or conniving as he was in previous episodes. His simple motivation of obtaining money in this one didn’t really make sense to me to begin with… what does KOO even need money for after being the head of an entire kingdom? I guess it contributes to his everlasting desire for greed and power, but it just came off as somewhat shallow and uninteresting for his character. Though he does provide for a relatively funny scene at the end.

So Bonnie & Neddy isn’t without its clunky moments, but it does provide a simple and charming backstory for one of AT‘s most complex characters that I can get behind for the most part. I think it does raise an interesting debate regarding PB’s treatment of Neddy, and one that has me personally conflicted even to this day. It’s a complex issue that’s masked behind a positive and well-intentioned message. 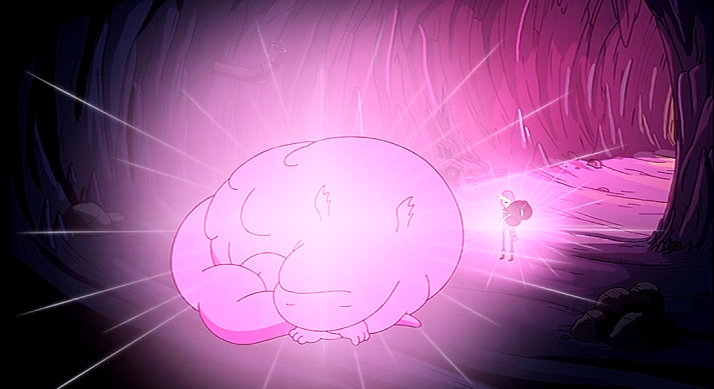