Going into LSP-centric episodes is always a difficult task for me. I’ve been pretty audible on this blog about my feelings regarding Lumpy Space Princess in the past, so you probably already know I’m not the biggest fan of her. Yet, at the same time, I don’t actively dislike her. Of the recurring cast of characters, LSP and Cinnamon Bun are about as close I’ve come to disliking anyone, but I certainly don’t hate them. Even with that said, there’s a bit of bias I do hold against these episodes going in that I’m sure a diehard LSP fan wouldn’t necessarily agree with. Then again, there’s also characters I genuinely enjoy like Tree Trunks who isn’t really able to hold up an episode on her own either, so I’m not sure if it all comes down to personal preference or not. I dunno, I’m rambling now, but even though I’m not able to enjoy Gotcha! a whole lot for the reasons I’ve mentioned above, it’s still a pretty okay episode that I think has its moments.

Part of the problem I do find with LSP-centric episodes is that her vanity and self-centered behavior just aren’t enjoyable enough to span the entirety of an 11 minute episode. The episodes she’s heavily focused in typically do revolve around the very one-dimensional side of her personality as well, which is why Lumpy Space Princess works best in small doses. You have an episode like this that attempts to help her come to a realization about herself and the way she behaves, but the fact that she still stays the same in her very next appearance just makes any type of development surrounding her seem like a waste of time. It’s not even that she’s portrayed badly in this one; I enjoy her epiphany that people aren’t solely attractive by their good looks and instead also by their personality, as well as the admiration she grows from Finn because he is especially attractive in that sense. However, as I’ve said, in a cast of characters that are constantly growing and changing, LSP is just one that we can never expect to change, which is fine, but it makes an episode like this seem practically pointless. The only time I find it interesting is when we’re treated to some of the more tragic aspects of her characters, such as in Bad Timing or Be Sweet, but any attempt to put Lumpy in a more compassionate and endearing light just feels a bit flimsy to me because her attitude and obsession with herself never seem to lessen.

As for the plot of the episode itself, I think it also suffers a bit from being slightly disjointed. It almost feels like it could’ve been separated into two different stories: one with Finn and Jake going on an adventure with LSP, and one solely revolved around LSP’s book. I feel as though they had some cool things going with LSP’s social experiment in the first act that just don’t get enough time to breathe or work to their fullest potential. That’s followed by an entertaining dungeon crawl, but by the time that expedition ended, I had almost completely forgotten LSP was writing a book to begin with. I liked both set pieces, but I think committing to one part or separating the two would have helped for satisfactory experiences. 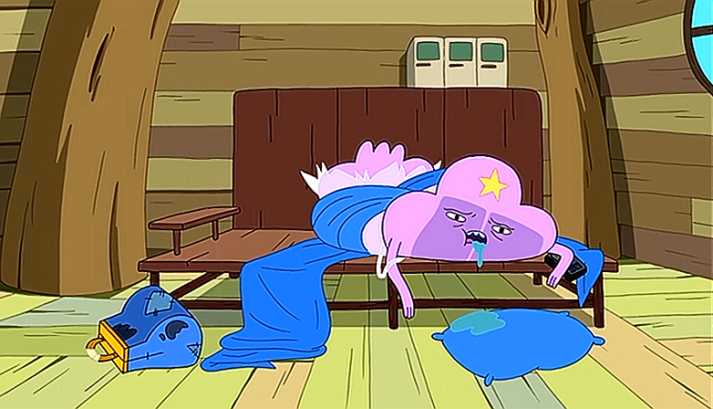 Not sure if the eye-whites here are an animation error or not. This feature was primarily done away with after the first season, though I’m not sure if the rule specifically applies to Finn. Nevertheless, you rarely see a character with eye-whites these days.

So yeah, I’m ranting my asshole out, but there are many other gems that are worth mentioning. Despite what I just said about the story, I do genuinely enjoy both the adventure and book aspect. From an LSP point of view, I think her parts can drag them down a bit, but it’s more of the atmosphere surrounding her that I like than her actual experience. For instance, I love that brief little montage of Lumpy Space Princess writing a new version of her story while that song about generosity plays softly in the background. The entire episode is just filled with nice indie vibes that I can really get behind. And I guess that’s the best way to describe how I feel after watching this episode, “nice.” Again, I don’t really find myself enjoying Lumpy’s character or sympathizing with her anymore than I did before, but I didn’t actively roll my eyes or find it painful to sit through. It’s not like sitting through a Ronaldo Fryman episode of Steven Universe (coincidentally, Rebecca Sugar boarded this one. Sorry, Rebecca. There’s just no way to make that guy pleasant or charming).

The connection between LSP and Turtle Princess is one I quite enjoy. The constant “HEY, GIRL!”’s throughout the episode do make me laugh considerably hard, and I just generally find Turtle Princess’s sad and macabre personality to be endearing, so anytime she’s on-screen is a delight. Jake in particular is pretty funny in this one. I like his brief interaction with BMO at the beginning (would’ve loved if Jake actually called BMO “sensei” in the next handful of episodes), his reaction when LSP first shows up at the doorstep, and his outburst “LSP, you’re wearing garbage as clothes!” towards the end. I think Cole Sanchez and Sugar went a little overboard with how nice Finn is for the purpose of the plot. It’s not overexaggerated or unbelievable, but it shapes him down to behave like a much blander character than he is. But again, this is from Lumpy Space Princess’s point of view, so I can’t really fault his behavior or the way he’s written for it. I would’ve enjoyed a few goofier or quirky moments for him. I do, however, like his remark, “you’re beautiful on the inside… like, your brain and stuff!” That was a perfect Finn interpretation of inner beauty.

The quest Finn, Jake, and LSP go on is pretty neat-o too. As I mentioned, I really would’ve liked to see a whole lot more of the Mystery Mountains, but what we got to see was pretty cool. The whole bit with the mirrors was really spooky and interesting, and it makes me wonder what the story is behind the mirrors. Is it secretly what LSP most desires? That would make perfect sense, because the entire episode is devoted to her realization that Finn is not attracted to her, but instead, she is attracted to him. While we’re on the subject, what is the age gap between Lumpy Space Princess and Finn? Like, we know she was already a teenager in her debut, and she later celebrated her quinceranera in The Eyes, meaning she’s probably 15 or 16 where Finn is now a 14-year-old up to this point. I always kind of thought LSP’s attraction to Finn was sort of creepy, but it’s kind of reassuring that they’re likely only a year or two apart. Also, is this the only time Finn uses that little slot on his backpack for the Demon Blood Sword? I mean, I know he used it to carry the Root Sword around, but from the Demon Blood Sword onward, he’s always just kind of kept them in an area between his back and his backpack. Weird thing to note, but I kind of wonder why he doesn’t use that slot more often. Probably a hell of a lot more comfortable (though also probably tougher to draw).

With that said, this one is okay. It has its fair share of decent moments, but nothing I get behind too much. Again, it might just be my personal beliefs blindsiding me, but there are several LSP-centric episodes down the line I actually really enjoy, so it does lead me to believe I’m not being too biased.

“I don’t know how it happened. Usually, I’m super observant about these kinds of things. Like that one time Melissa’s lump was all crooked when she came back from the bathroom. I observed that. I observed that all day and didn’t say anything. She must have been so embarrassed for herself. What-ever. ‘Cause that’s what you deserve when you PO LSP. Ha. Oh, she know what she did – No, I’m not going to tell you.

After all, a girl’s gotta have some mysteries.

Anyway, I’ll talk to you later, book. To recap, Finn is the one who is hot. I’ll see you in the next chapter. BUMPS.”