If there’s one thing I always like to make clear in regards to Bubbline is that it is not, nor was it ever, the most important or crucial story that Adventure Time has ever tried to tell. That idea alone seems like common sense, but there seems to be a handful of people that hold the belief that Bubbline is the sole arc of importance in the entire series. For me personally, I enjoy the relationship between the two, for the most part. I think they have a nice, charismatic dynamic, and a decent history that’s both believable and quite poignant. Though, like any other character, story arc, or plot point in the series, I’m not going to act like it’s sheer and utter perfection. And I think this episode, while not bad by any means, shows that the two working off of each other isn’t always especially raw or endearing, and in fact, I think it’s a little clunky in execution. I bring this up simply because, as these reviews go on, I’m not really going to aimlessly praise every scene featuring Bubbline as an undeniable masterpiece. At best, I think they can provide for a likable connection between two opposites. At worst, I think their chemistry with each other can somewhat fluctuate and/or feel slightly forced. 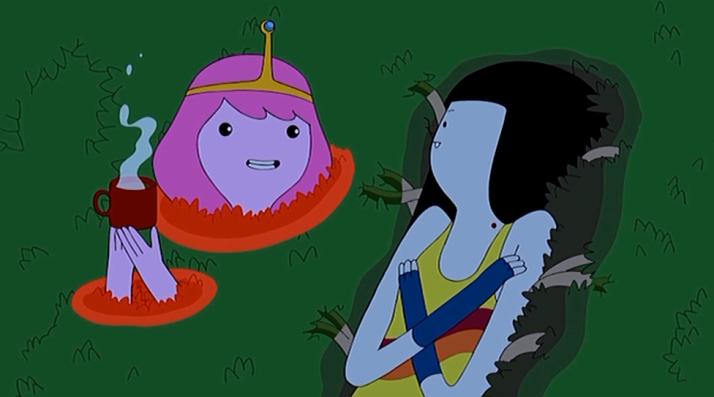 I think the main issue with the way the two are portrayed in this one is that I’m never completely emotionally invested in the two. I think the writing is a bit schizophrenic and never really lets the moments that are supposed to be a bit more powerful and effective come across that way. PB talking down Hambo to Marceline should’ve been a pretty harsh and heart-wrenching speech, though it’s glanced over pretty quickly and isn’t really given enough time to explore. Whereas the ending, where PB suddenly decides that she isn’t leaving without Hambo and heroically rescues Marceline’s stuffed animal comes across as a bit rushed to me. I mean, it’s obvious that PB does care about Marceline and doesn’t want to hurt her at the end of the day, but I thought her transition from “Hambo’s fucking stupid, let’s leave” to “AW, HELL NAW, AM I LEAVING WITHOUT HAMBO” feels slightly bipolar. This is one of those instances where PB’s detachment feels kind of detrimental to some of the more challenging aspects of the episode; we want to see PB be charismatic and care for Marceline, though she’s written so apathetically that I never feel like I know what I’m supposed to feel. The parts that are supposed to be more emotional and build on the connection between the two just feel… lacking.

But, what this one lacks in emotion, it makes up for with some pretty humorous interactions between the two gals. PB’s bitchiness is amped-up in this one, and boy, is it tons of fun to watch. I love her passiveness towards something that means so much to Marceline, considering PB probably doesn’t have much of an emotional connection to her material possessions as others would. I also love her brutal roast of Raggedy Princess, it comes so out of left field. This is really when PB’s “cold-hearted” behavior starts to come out in full force, and I think it’s a pretty gradual transition at that.

Marceline, on the other hand, is characterized just alright. Jesse Moynihan once said that he struggles to write for Marceline the most, and I think it kind of shows. Not to say she’s written poorly, but I don’t she’s portrayed as very interesting either. I do enjoy the way she seems to struggle when first asking PB to spend some quality time with her, as it’s pretty clear that she hasn’t completely warmed up to the idea of being close to PB again, and that it’s somewhat of a pain to try and connect with her. Again, these are moments that I wish were emphasized a tad more. I think some of those moments are brought down by some pretty awkwardly written moments for Marcy. Her emphasis of how important it is to rescue Hambo goes on a bit too long for my liking, and her insistence of bopping PB on the head seems a bit too… goofy for her. I mean, Marceline does have her silly moments, though not to the degree that the other characters are able to. She’s more deadpan and snarky than straightforward zany.

I think this is one where the settings are pretty dope; where the typical AT forest is usually bright and colorful, this one features a darker, more desolate forest that I think is actually a nice touch for a change. In addition to that, Maja’s mansion is pretty dope. Aside from the cool anti-gravitational landscape, I like all the small details, like the fact that Maja is a clear collector/hoarder. There’s also a portrait of the ghost lady from The Creeps that I’m not sure how it ended up in Maja’s possession, but I’m assuming she just wandered across it while casually traveling around in Ooo one day.

Maja herself is good fun; she’s voiced by Jill Talley, who is actually Tom Kenny’s wife and the voice of Karen on SpongeBob SquarePants. Talley, per usual, offers great talent to the character of Maja, that’s only added to by the demonic double voice she delivers under her regular voice. Reminds me of HIM from The Powerpuff Girls. Maja’s Crabbit is an interesting concept as well, though again, I think his presence in the episode could’ve been a little more interesting. I kinda wish he did return with Maja later on in the series, as I would’ve liked to continue to see him as her buttmonkey companion.

What this one boils down to is a mildly fun adventure focused episode. I think it could’ve been stronger, considering we only get so many Marcy and Bubblegum interaction episodes until season 7, but otherwise, I think it’s fine. In terms of what Bubbline shippers like to see, I don’t even think there’s a ton you can analyze or look deeper into. There’s the completely odd moment at the beginning where PB inhales the shit out of Marceline’s shirt, but I think that just kind of comes off as awkward and ill-fitting than charming or likable. It’s a light and fun quest that serves as some tasty fluff to prepare for when things go completely off the walls in the next episode. 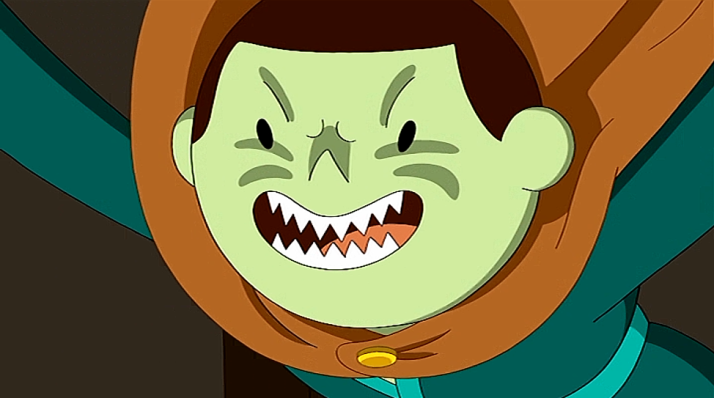