I’ve done it again! I incorrectly mentioned that Season Four was the only season Skyler Page worked on, but lo and behold, he still has two episodes left. This time, paired with Somvilay, and it seems as though he adopts Somvilay’s style of writing and character design quite accurately, as, from looking at the episode and storyboard in general, I had a tough time deciphering who contributed what. It’s an interesting pairing that makes for an interesting episode, but for the most part, I think it works. Like I mentioned, even in Page’s portion, there’s a ton of Somvilay stylistic choices that usually bother me; the slow pacing, use of anti-humor, and some very wonky drawings of Finn (though this one still bothers me. I refer to my good pal Stuped over on the reddit who mentioned that Finn “looks like a refrigerator.”) While these issues seemed to plague an episode like Ignition Point, I think it actually works pretty well with the tone and laidback atmosphere that Up a Tree set out to create.

There’s something quite… relaxing about this one, so to speak. It’s in the same vein as Jake the Brick (though, I’ll say right now, that episode is much superior in quality) in the sense that I feel as though this is an episode I can fall asleep to. It’s very low energy, and I quite enjoy watching Finn just take a simple expedition up a tree that is turned into a much bigger and more complicated matter, ala AT style.

There’s a lot of fun set-up moments, like Finn and Jake’s game of “throwing and catching disk” (this episode actually made me realize the term “Frisbee” is copyrighted by Wham-O) which has their take on the ego of “human boy” and “dog” in probably the silliest and most ignorant depictions of their olden counterparts possible. Funny enough, I’m wondering if Finn’s knowledge of dog’s only being able to bark in the olden days derives from his experience as his Farmworld counterpart. Afterall, it’s later revealed that some of Ooo’s civilians didn’t even know that dogs didn’t used to talk, so I’m wondering if Finn subconsciously picked it up, or if it was just something that Marcy spilled to him sometime prior. The pretext to this game of throwing and catching disk is a picnic with Lady, as she continually gets more and more preggers. Jake and Lady easily only continue to get cuter per episode revolving around them, as Jake takes good care of her and makes sure she isn’t straining herself too much. I can argue for days about how Jake was somewhat of a jerk to his buddy two episodes ago in Jake the Dog, but I could never argue that he doesn’t love that damn Rainicorn to death. 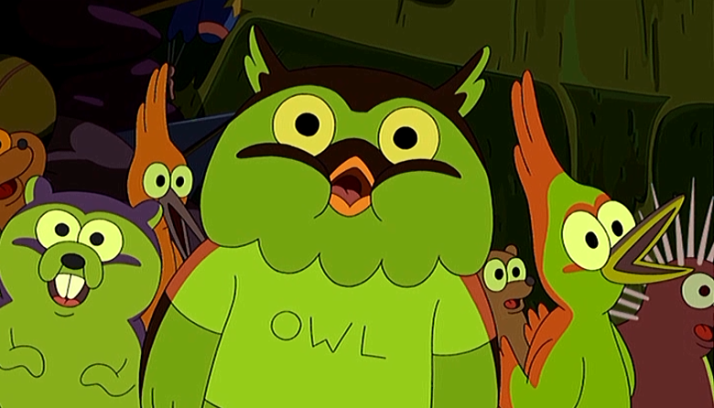 Once Finn begins his journey climbing up the tree, we meet some delightfully off-putting animal characters: the Porcupine and Squirrel. I really like their heavily inspired 1930’s animal designs, and their general behavior/demeanor is really enjoyably unusual to me. Jim Cummings voices the Porcupine, as well as most of the other featured animals, and he does a great job of giving a charming, yet deeply unsettling performance for the Porcupine especially. Cummings has a pretty easily recognizable voice, but one that I really never get tired of hearing, so it’s nice to have him offer his talents to AT. The Squirrel, who later ends up becoming an ally to Finn, is actually a one-off character I’m quite fond of. I think his general indecisiveness and inflections (performed by Marc Maron) really carry his character through, and there’s always something very likable and endearing about Adventure Time’s loser characters, as well as the way they are treated. Like, I’m sure they knew that we were only going to see this character once and he probably wasn’t going to be used again, and so Somvy and Skyler could’ve taken the easy and meaner root of having the Squirrel’s flying just fail completely, but fuck it. This random Squirrel who we’ve only known for five minutes deserves a happy ending, so they gave it to ‘im!! AT’s lack of sadism towards its own characters never fails to charm me.

The animal occult strikes me as quite odd. Like, what are they about? They just lock up any trespassers who enter the tree for inexplicable reasons? What is the basis of their government and slogan of “in the tree, part of the tree?” It’s never really explained and somewhat feels like a forced conflict, but eh, I never really took it that seriously and I don’t think we’re supposed to. I think we’re just supposed to enjoy the creepy, big eyed animals and their deranged methods, and I certainly do. The Owl, also voiced by Jim Cummings, is a pretty fun antagonist for how little he’s on screen. Again, his entire character and memorability pretty much derives from his design as well as voice, because he really doesn’t have enough screentime or character for me to actually find him interesting otherwise. Also, he inexplicably wears a shirt that says “Owl” on it, just in case people don’t know what kind of animal he is? Pretty funny.

As a side note, there’s some really nice backgrounds in this one, courtesy of Santino Lascano and Derek Hunter, that I felt inclined to include them below. 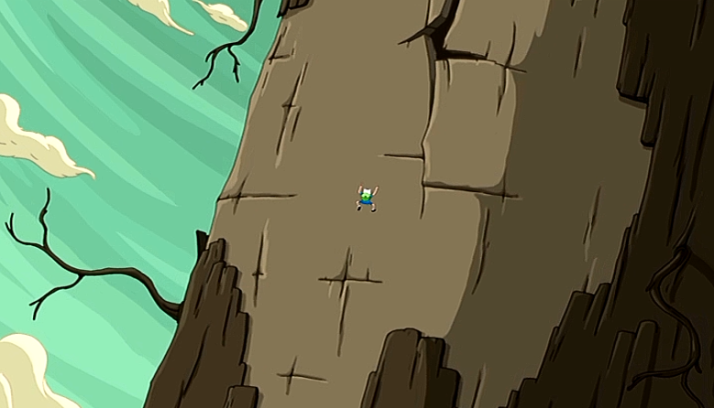 Like I mentioned, there’s a lot of breaks in silence, awkward moments, and odd jabs at humor that Somvilay’s pretty accustomed to at this point, but a lot of little moments I actually found myself laughing at this time around. Brief moments like Jake pointing at the frisbee before going to pick it up or the audio clip of Finn saying “pooooped” repeatedly being used aren’t really inherently funny ideas, but work in the way that Somvilay intended them to come off: so “not funny” that they end up being delivered as funny. Again, this is something that’s very objective, though. I’ve been a heavy critic of this style of writing in the past, so I can easily see someone finding this episode completely unfunny. It really is just the matter of somehow hitting a person’s sensibilities whether it wants to or not, which can completely fail for me in instances like Ignition Point, yet somehow work in this episode. This is really why I think Somvilay is one of the most unique and innovative writers on the show: no matter how badly his approach to humor fails, he does everything in his power to make his episodes as “unfunny” as possible, which somehow wildly pays off occasionally. It’s really quite the spectacle.

That being said, it doesn’t excuse the fact that I just really cannot get behind the way he draws Finn on occasions, and this being one of the most notorious. Besides exaggerating the tubed body to EXTREME lengths, once Finn is shrunken down, the hole for his face on his hat becomes unnaturally small. Like, I guess you could argue that it’s somehow a result of the cursed apple, but it just looks so God damn jarring a good majority of the episode, and isn’t visually interesting or funny enough to even enjoy. I just keep scratching my head on why the hole is so fucking small! 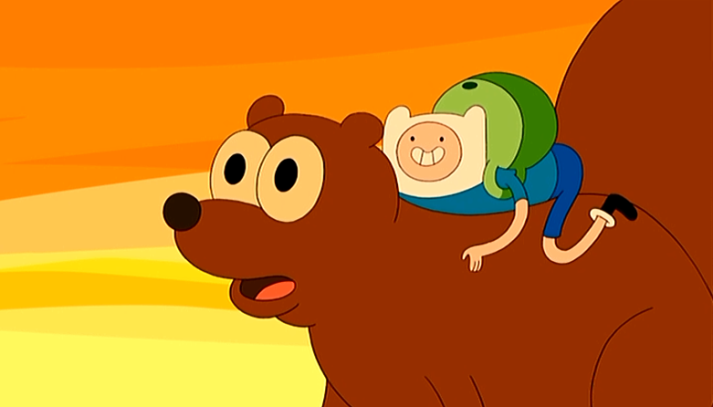 As I mentioned earlier, the ending closes off with a pretty beautiful flight into the sunset, featuring the Squirrel and Finn. It’s simply an ending that works entirely on an emotional level and makes ya feel really warm and fuzzy: Finn retrieves his disk and the Squirrel gets to call himself a flying squirrel. We also get a cameo from the snail who is now free from the Lich’s control, and Jake, who is happily stirring up some pickles and ice cream for his significant other. All is well in the Land of Ooo!

I like this one quite a bit. Like I said, this is one I can imagine people don’t like because of the very slow approaches to humor, but I don’t even really like this one on a humorous level. I just like it because it’s easy to watch. Nice colors, nice designs, nice atmosphere, and a nice ending. Everything about it is just really… well, nice, and it’s hard to really argue against an episode that just kind of sets out to make you feel good. It accomplishes that goal quite well, and makes for a simplistic and endearing story in the ever-changing world of Adventure Time.