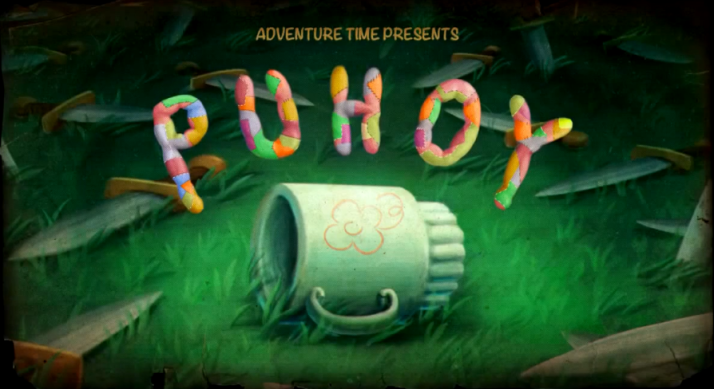 Puhoy is arguably one of the most theoretical episodes to date. I’ve seen more diverse interpretations for this one than any other episode, and for good reasons. It’s a purely heady fantasy adventure that once again touches on Finn’s entrance into puberty and his growth, and one that does a pretty fantastic job at that. I’ll be honest, even after several viewings of this one, I’m not sure exactly what I’m supposed to gather from it, but I mean that in the very best way, as this is one that continues to intrigue and interest me on multiple viewings after. 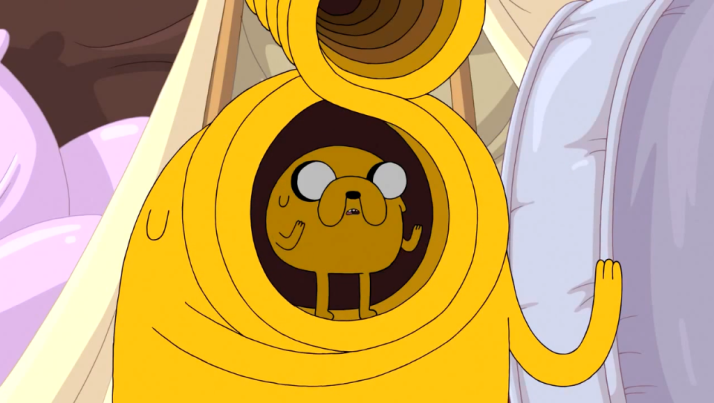 As a knifestorm rains down on the Treehouse, Finn contemplates his relationship with Flame Princess and the current state that it’s in. Apparently it’s in the midst of a disaster, mainly because FP didn’t laugh at one of Finn’s jokey joke jokes, which makes Finn seriously consider ending the relationship over such a small debacle. It is interesting to see Finn in such a state of independence; as we’ve seen in the past, and as we will see in the future, Finn is usually much more dependent on Flame Princess than she is to him, so seeing him quite confidently acknowledge that he should end the relationship is certainly remarkable. Obviously I don’t think his confidence in this decision would last, and I think it’s totally something he would later regret in a few days, but it still strikes me as interesting that he shows no fear of potentially losing her. Jake gracefully tries to show Finn the error of his attitude, showing that getting hung up on issues that Finn himself has created in his mind won’t get him anywhere. He demonstrates this by tossing his favorite mug out the window, thereby releasing any emotional connection he had to it and not allowing it to cloud his attention. This is retconned later on when Jake reels the mug back in, showing that the desire to resist what your heart tells you and the resistance of persisting thoughts aren’t as easy as they seem. This is why Finn, who usually heeds to Jake’s advice, instead chooses to take time to “fester” and enters the pillow fort.

The pillow fort quickly turns into a pillow world, and Finn finally finds himself in an enchanted universe. The pillow world is adorable and lots of fun. The episode is quite creative in showcasing some terrific and colorful backgrounds, as well as some really nice looking designs. The Pillow World commits to everything being made of pillows to a tee, from Finn eventually gaining a robotic pillow arm (FORESHADOWING!!!!!) and the various textures on the inhabitants’ clothes and body parts. It all looks really lovely, and is one of my personal favorite locations in the entire series, purely on a visual level. There’s something quite whimsical feeling about it, and again, “whimsical” is a fascinating adjective to use when describing a world literally made out of pillows. But, as usual, the background artists really did their damndest to make this world feel authentic, and it pays off tremendously. 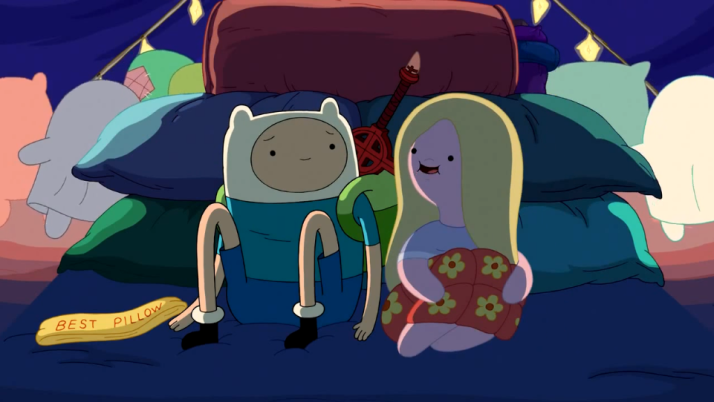 But the real meat of the episode, however, is Finn’s experience within the Pillow World. Finn practically lives his life all in one packaged day: getting married, having kids, forgetting his younger self, and even eventually dying. It’s the type of a mindfuck premise that really kind of makes me wonder how much of it is happening in real-time, much like the premise of Hall of Egress later on. Mindfucks aside, I just genuinely enjoy seeing an older version of Finn, and I’m pretty sure it’s exactly how anyone had envisioned him. He’s a buff, masculine, bearded hero with a missing arm. That last part always makes me question what exactly was sharp enough in the pillow world to actually physically slice his arm off, but I’m probably reading too far into things. Besides that, I really love his family as well! His relationship with Roselinen doesn’t get a ton of development, as expected in a marriage that only spans the course of eleven minutes, but there’s something about the way the two work off of each other that makes it seem so… believable.

And I think that’s the best way to describe everything and everyone that Finn encounters in the Pillow World: believable. Whether this world is reality or not, I have no trouble believing that Finn would be a sexy, buff hero as a grown man, that he would have an honest and understanding wife, as well as two well-raised children. It actually has you kind of rooting for Finn to stay in the Pillow World at times, just because it seems like he’s created a comfortable living space for himself here. And there’s plenty of nice little tidbits, including the fact that Finn’s children are named “Jay” and “Bonnie,” which is especially endearing considering that, even after however many years Finn has spent in the Pillow World, he still holds a deep admiration for PB in his heart. Also a subtle moment, but I actually like the brief moment of sadness Roselinen experiences when Quilton reveals to Finn a possible way to escape their world. I just love that they did take the time to give this character some real depth and sympathetic traits. Even if the relationship is based on fantasy and that we want Finn to return home and acknowledge the error of his ways with his current/past girlfriend, Roselinen is someone who still put her all into getting to know Finn, marrying him, and giving birth to their two children, and although she acknowledges later on that she knew that Finn would have to leave eventually, she had settled into a terrific life with him. Though. Finn himself isn’t able to see that because of his lingering thoughts of wanting to go home. Roselinen proves to be one of the most emotionally mature and sound love interests he’s experienced even since the moment they danced to an instrumental of Let Me Show You Something Special, though Finn is once again more hung up on the past than the present in front of him. 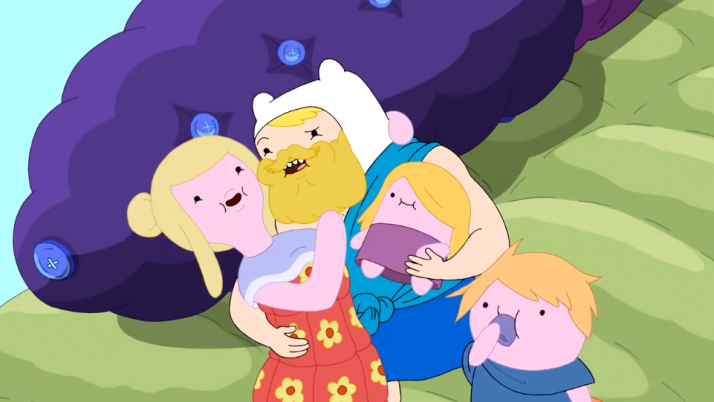 It boils down to Finn meeting up with “the oracle” Rasheeta, who really just seems like some crazy old man with bowel issues. It’s an enjoyable interaction, mostly carried by the voice work of Wallace Shawn, who I’m still glad got to lend his unique voice to a show like AT. I also really dig that “tea leaves” joke. Once Finn departs Rasheeta’s home, and states that he must “fester a bit,” mirroring his line earlier in the episode, he begins to acknowledge that, perhaps instead of focusing all of his attention on the troubles he’s faced with, perhaps he should just kick back and allow himself to accept life for what it is and allow the unknown to enter. Even as Finn recounts Jake’s message to him prior, he realizes that he isn’t even able to recall the interaction completely, and his warped sense of memory won’t do him any good when it comes to making worthwhile decisions. It’s here where Finn simply allows himself to let go of the past and focus on the positive connections that better his life, not the troubling thoughts that plague him from developing further.

This proves beneficial to Finn until his very last days, where he is surrounded by those who love and care for him. It’s a moment that is a bit touching, though it mostly focuses on being silly and light. I mean, even if our main protagonist is technically dying, we all know he isn’t actually just going to be killed off, so we spend more time enjoying Finn as an old coot, until he dies and enters some form of Dead World. Here, he’s met with a demon-like character known as GOLB, who is featured in subsequent episodes and may or may not be the big bad that kicks off the entire series. But we’ll see, I guess?? Finn’s only interaction with this deity is a brief bounce off of his tongue, as he re-enters the reality he left behind in Ooo. And if I had to guess, I’d probably have to say that the Pillow World Finn entered was real, and Finn’s interaction with GOLB simply erased that reality from his timeline and memory. Though, Finn is presumably met with a lesson at hand when Flame Princess does call to acknowledge how funny Finn’s joke was. He doesn’t recall a single thing that happened in his “dream” but the call from FP showed him that he was simply overreacting, and that viewing anything with an attitude of acceptance and patience is really much more worthwhile and mentally beneficial than creating drama and alternate versions of reality within the realm of your mind. That’s what I got out of it, at least. I’m sure y’all have plenty more interpretations yourselves, so feel free to share! 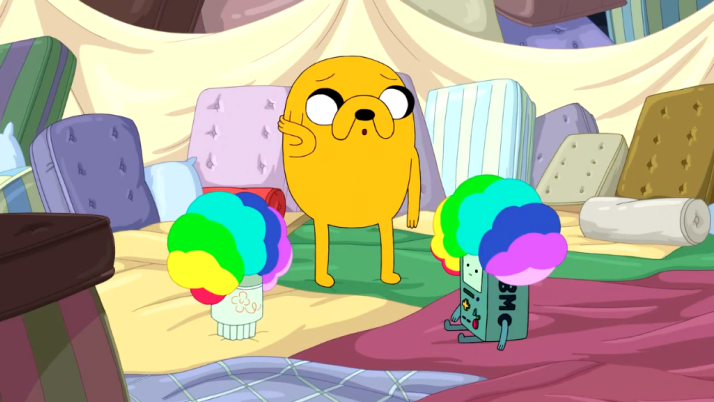 And I neglected to mention the brief glimpses we get into BMO and Jake straight chillin’ within the Treehouse, which are just as terrific. They range from silly to somewhat poignant, where we get some funny and enjoyable lines like, “Jake, you drive a hard burger;” BMO’s incapability to grasp the human language never tires on me. There’s also a totally out of nowhere scene where BMO asks Jake if he misses his babies, and Jake just sadly grunts, which actually is pretty effective. We haven’t heard anything about the kids for 10 or so episodes, so it’s nice to see that they are acknowledging that Jake isn’t quite over the fact that he didn’t have a proper chance to raise his children, and that it is affecting him in one way or another. Also, the Pillow World, while thoroughly enjoyable, was somewhat light on actual jokes, so it was nice to have these brief interludes with the Treehouse boys.

Overall, I really, really enjoy this one. It’s experimental in all the best ways, and a really interesting use of a fantastical scenario that focuses on a different aspect of Finn’s life. It’s no secret that this episode takes some inspiration from Star Trek: The Next Generation, right down to the fact that it has Jonathan Frakes voicing the adult Finn, but it does so in all the best ways. All of it is so compelling: adult Finn and his family are really interesting and likable, and provide for a very subtle and ambiguous story that doesn’t really focus on heroes and bad guys, but the trials of life and how they are dealt with. Even as an adult, Finn isn’t able to completely pinpoint his issue of being too obsessed with his issues. It’s a pretty nice motif that carries across the message that everyone in this world should stop taking everything so fucking seriously. Relax! Have sex with a pillow if you need to! Luckily enough, however, Finn was able to realize his faults before he turned fifty, and is able to continue a healthy and ethical relationship with Flame Princess…. For now. I have few problems with this one besides that brief moment at the beginning where CMO lands on top of BMO’s head, mainly because it makes absolutely no sense as to why he would be there besides for a cheap easter egg gag. Aside from that brief nitpick, this one is a considerably shiny gem to me. 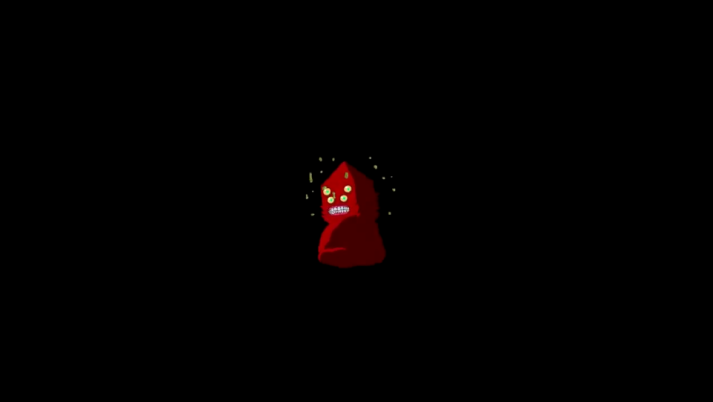 Favorite line: “You’re getting all hung up, all hung up on imaginary problems. You gotta focus on what’s real, man.”

One thought on ““Puhoy” Review”