People often turn to Rainy Day Daydream when considering good starter episodes for those looking to begin watching AT. I concur with this notion and believe that this episode, along with The Enchiridion, really define and introduce the overall goofy and adventurous aspects of the series. Rainy Day Daydream, written and storyboarded by creator Pendleton Ward, may be the Pen Ward-iest episode of them all. It’s reeking with his creativity and silliness, it’s an overall charming depiction of the characters he created and holds so dear to him. 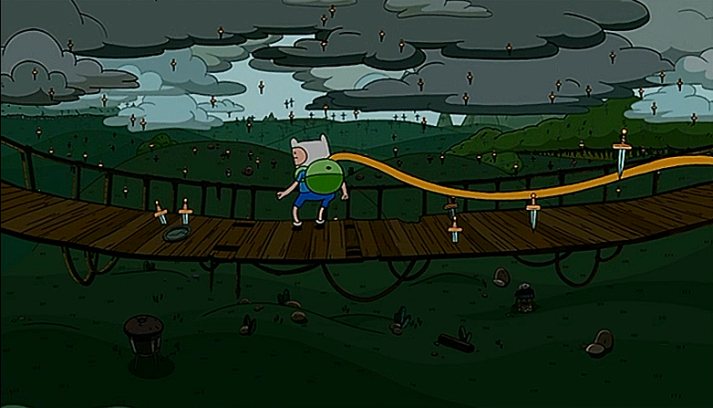 There are loads of creative concepts in this one. From knife storms to Conversation Parade video games, the episode is oozing with creativity in its very first minute. Throughout the years watching it, I’ve always had mixed emotions about the imagination aspect in this episode. On one hand, it’s an impressive feat that the episode manages to throw so many creative monsters and obstacles in without ever actually showing them, but on the other hand, it would’ve been cool to see the actual designs of some of these creatures and traps. It’d be a bit more interesting if the episode was half nothing happening, half Finn and Jake’s point of view.

But what we got was still tons of fun, and I really love Pen Ward’s influence on his characters. This is the only episode to be solo written and boarded by Pendleton Ward, so it’s interesting to get to see his vision of an AT episode completely on his own. The way he writes Finn and Jake is so likable and charming, and why shouldn’t it be? These are his characters, and Ward knows them better than anyone. I also really like how he allows F&J to have moments to just shoot the shit for a bit and hang out; there’s a scene where the boys flee to the attic and Jake finds some banana candy and juice and shares it with his brother. It takes up a good thirty seconds and is completely unrelated to the rest of the episode, but it’s just so enjoyably random and laid back that I really don’t mind. I like that Finn and Jake are two characters that can just sit back and enjoy life, yet still be entertaining to watch.

And this episode does its damnedest to highlight all the likability of each character: Finn’s enthusiasm and love for anything thrilling and adventurous, and Jake’s “bombastic personality” and love for thinking outside the box. Most importantly though, it highlights Finn and Jake’s terrifically crafted relationship, and the heartwarming and fun aspects of it. The more I think about it really, the more I realize how the show managed to make an amusing and exciting adventurous episode without even leaving the tree fort. It takes two strong main characters to carry that out, and I’m glad this show has Finn and Jake to turn their boredom into something very enjoyable for us. 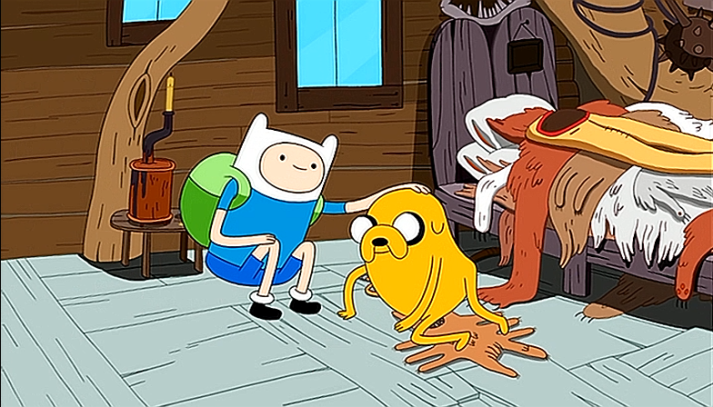