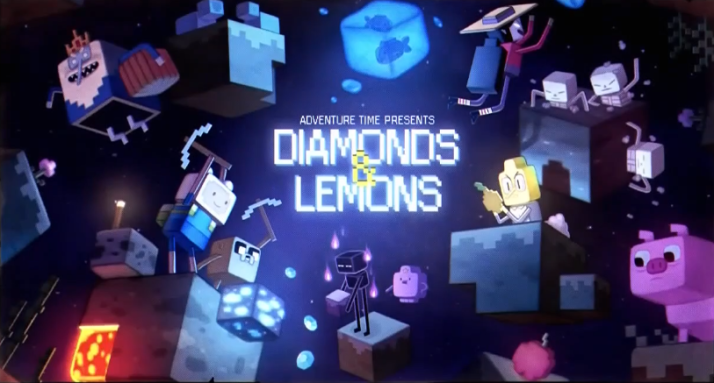 Diamonds and Lemons is a very… different Adventure Time special, in more ways than one. While Adventure Time is no stranger to having shorts and specials outside of its production schedule (The Wand, Graybles Allsorts, and Frog Seasons) it has never had a fully realized 11 minute episode not assigned to any one season. It’s also the last Adventure Time episode ever produced, originally intended to be aired after the series finale. I’m kinda glad that didn’t happen, because I feel as though my sense of finality with the show, along with many other’s, would be harmed in the process. I feel as though it’s the primary reason Cartoon Network held off on Come Along With Me for so long – to get this considerably less conclusive episode out first.

I’d also argue that this is Adventure Time‘s first, and only, real crossover episode. The world of Adventure Time has always felt very self-contained and devoid of the possibility of crossing realms with other pre-existing properties. Pendleton Ward himself stated that he had no intention of ever doing any crossovers, and the show remained that way for quite some time.¹ It is quite interesting that a world as limitless as Adventure Time would have such a restriction, but it does make sense from several viewpoints. While crossovers are fun, they can also be gimmicky. While they explore more possibilities within the property’s universe, they also can defy the laws of its world that make it so unique to begin with. For these reasons, I was pretty opposed to the idea of Adventure Time combining its style with other properties, and wasn’t especially happy when I heard about the concept of Diamonds and Lemons. Though not the traditional idea of a crossover episode, Adventure Time taking on the world of Minecraft felt like a pretty clear cash grab that didn’t initially seem to stem from a loving motivation by the production team. But, as more came out about it, I started to become pretty fascinated by Diamonds and Lemons. Not only did its general design fascinate me (I was really expecting Diamonds and Lemons to be a blatant exploration of the Adventure Time Minecraft map) but the passion and attention-to-detail really began to seem apparent. Adam Muto even sweetly stated that the episode was more of a selfish opportunity for him to work with the AT team one last time, which makes me appreciate it so much more. So, I’ve gone on long enough about the backstory of Diamonds and Lemons – what do I actually think about the episode? Well, it’s good! … I think.

The most difficult part about enjoying Diamonds and Lemons to the fullest is that I’ve never played Minecraft a day in my life, and I sort of feel as if the episode is a bit exclusive when dealing with inside jokes and elements from the game. I have no idea what “griefing” is or even the basis of Enderman; I feel as though the episode doesn’t really over-complicate these features, but it is probably more appreciated by people who are actually into Minecraft itself. I wouldn’t expect a Minecraft episode of anything to be entirely suitable for a general audience – even South Park‘s spoof from five years earlier, Informative Murder Porn, had me feeling slightly left out of the action. Some Minecraft elements do work, purely in the realm of absurdity. I’m assuming that pig-riding is a prominent element of Minecraft, and even without that prior knowledge, it is funny to see Mr. Pig being so submissive to the request. 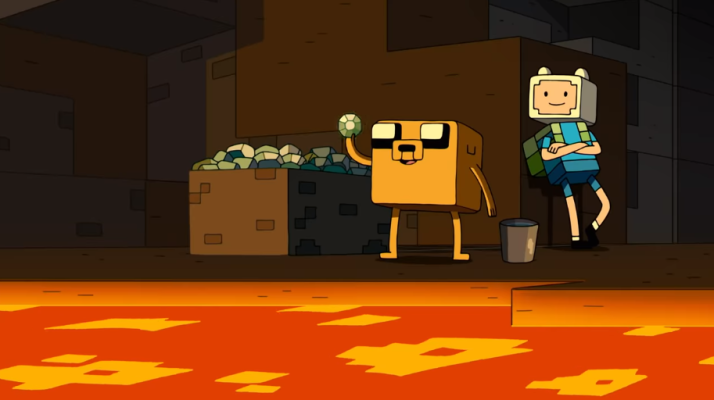 Speaking of Mr. Pig – he’s in this! I know that’s not an inherently shocking statement, but the sheer amount of tertiary characters that received special Minecraft style models is really impressive. So many of these characters aren’t even necessary for the story, yet it shows the surprising amount of effort and care that went into this bizarre crossover. Hell, the Life Giving Magus is in it! A character that practically nobody cares about, but one that they still worked in regardless. It’s really nice.

“Nice” and “effort” are words that sum up a good majority about Diamonds and Lemons. What makes this episode seem like less of a cash grab is the amount of care that went into its production. Diamonds and Lemons actually has a really nice atmosphere; many sequences within its run-time are focused on characters just going about their lives silently as beautiful skies change around them. Even though I mentioned that many of the characters included aren’t particularly necessary for the story, almost everyone has an individual arc that is concluded. Marcy and PB build a windmill, Lemongrab ends up actually creating something (even if it isn’t a lemon), Tree Trunks finally gets her apples, Ice King successfully “griefs” Finn, etc. A lot of these individual character moments are really fun and likable – I even think Marcy is a lot more lively here than she’s been in quite a while.

In typical Adventure Time fashion, an episode as disposable as this one does present a story with a decent amount under the surface to chew on. The episode tackles the concept of money quite nicely, and the pressures that come with actually possessing it. There is, of course, the social pressure of wanting to have nice things like those around you as a sense of validation for your own being, but there’s also the conflict of having disposable income with no idea what to use it for. I think it’s kind of a common idea that people feel that they NEED to spend their money on nice things for it to actually have value. But shiny and valuable objects don’t actually fulfill any kind of human need, which leaves us with a “fleeting sensation of beauty and its false sense of purpose.” Hell, I believe this, and I still fall into the habit of collecting junk for the false sense of value. Just look at all of the nice looking Adventure Time crap that I’ve accumulated over the years! Jake’s careless disposal of diamonds seems illogical at first, but it quickly becomes clear that Finn’s purchases are essentially just a more glamorous version of wasting money. As Finn states:

“Beauty is in the hard work itself and the – oftentimes false – sense of purpose we feel when doing it. It’s a fleeting sensation that drives us to repeat our actions in order to capture it again.”

Essentially, the things we can do with money don’t really matter (given that we’re able to provide for ourselves and fulfill basic human needs), but the work we engage that actually does give us a sense of purpose, even if it isn’t matching our full potential. Again, I have no idea if this analysis actually applies itself to the nature of diamonds in the Minecraft universe, but it helps me to have a bit more fun with Diamonds and Lemons regardless. 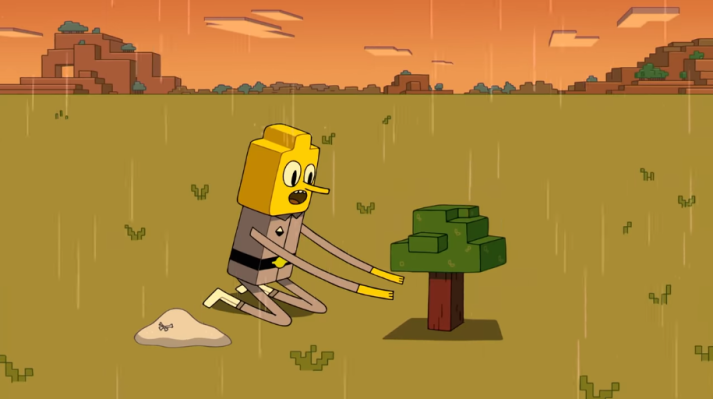 I never thought I’d say it, but Adventure Time‘s Minecraft episode is surprisingly enjoyable. It boasts charming character designs, lovely backgrounds and colors, fun character moments, and a nice central theme to tie it together. I don’t really think Diamonds and Lemons is great, by any means. While it makes for a pleasant and fun viewing, it isn’t exactly strong story-wise, and it’s hard to fully invest yourself unless you’re a fan of both franchises. But, for what it is, I’m amazed that it actually manages to be as decent as it is. For an idea that really came across as an apparent cash grab, it really shows that this was a project built on community, giving the AT crew one last hurrah before closing up shop.

Diamonds and Lemons also features a pretty awesome pixelated intro, animated by artists Paul Robertson and Ivan Dixon. You can check it out on their YouTube channel here! 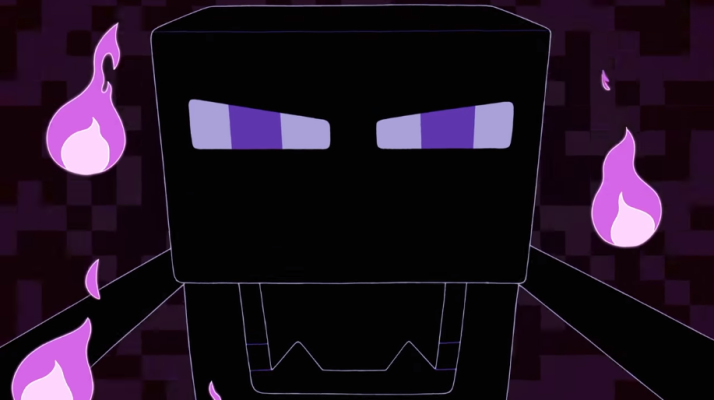 ¹ Pendleton Ward stated at some point during AT‘s SDCC panel in 2013 that he wasn’t interested in the possibility of crossovers. Though, this was specifically in response to a fan’s question about a My Little Pony–Adventure Time crossover.

Favorite line: “Does this guy even have toes? Are those his toes? I don’t think I’ve ever even seen a toe, come to think of it.”