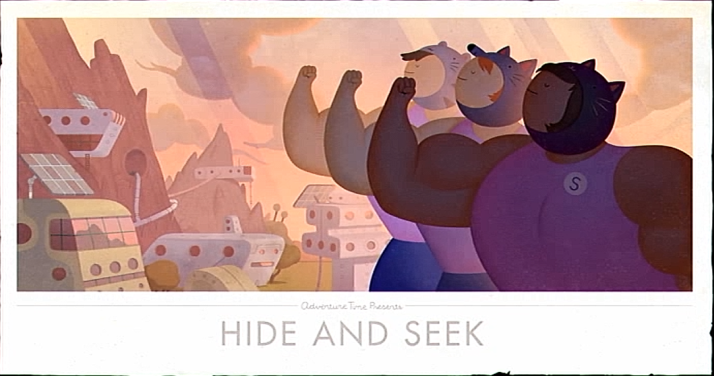 Hide and Seek really kicks Islands into high gear by diving deep into Susan – er, Kara’s backstory and pretty much showing us everything we’ve ever needed to know about her character. This episode is pretty much one big exposition bomb regarding the policies and nature of Founder’s Island, but one that is tied to a truly tense and somber story in reference to how much freedom the humans actually have when dealing with the long term aftermath of the war. It’s interesting to see that, even among a world of totally civilized and very self-aware mutants, the humans still shelter themselves off in fear that they simply cannot survive. It’s a potentially overly cautious notion, but from the instinctively panicked eyes of a human, I feel like it totally makes sense. In the midst of all of the violence and terror within our own society, extensive security measures are pretty much a norm by this point in time. Not to say that extra attempts at safety are necessarily counterproductive, but the way Hide and Seek executes the dystopian policy feels very real and logical from a humanistic perspective. Of course, what Hide and Seek also plays around with is questioning “how much is too much?” as certain humans battle between safety and free will. 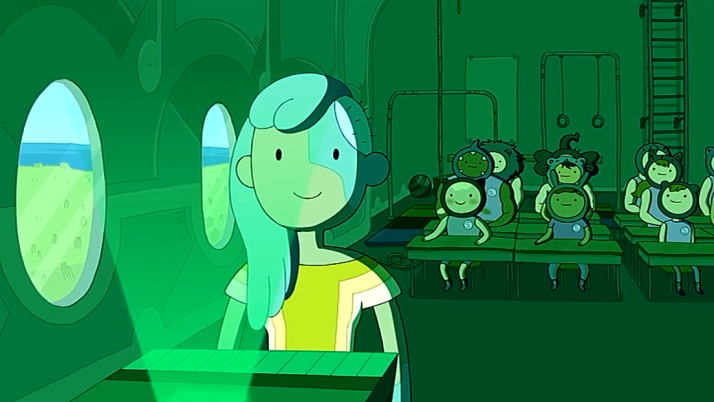 Returning to the series once more is Dr. Gross, which was to be expected from her initial appearance in Preboot. I wasn’t entirely into Gross’s character in her debut, and thought that her descent into villainy felt somewhat confused at times, but here, she really gets a chance to shine. Dr. Gross is straight up wicked in this one, using manipulation and her own ideology of how humanity should be to strike against anyone that defies her. I truthfully like the way she’s designed here better than her design in Preboot , and I think her general appearance is interestingly symbolic when compared to the other humans who surround her. While she’s stated that she desires to bring the humans into a new golden age, she’s likely the least human person on Founder’s Island, both figuratively and literally. She wants everyone to preserve what remains of the human species, but in the process, everyone is becoming considerably less human themselves. The Founder’s Song not only paints a great picture of how humanity got to this point, but is also really, really catchy. This is one of my favorite post-Sugar songs without a doubt, and Lennon Parham’s voice quite tremendously carries it through. There are also plenty of other nice tidbits within the song sequence, such as how one of the blimps is clearly labeled “MoCo” and how it appears the gaping crater within the Earth is actually referenced to be a result of human error rather than the war itself. At least that’s what I’ve gathered, from Dr. Gross’s musical cues.

Kara’s backstory gives us a lot insight into her character, and it’s admittedly pretty sad. Throughout her entire life, Kara has never truly been able to choose a path for herself. While we’re all conditioned to think about and perceive the world in certain ways, most end up choosing whether they want to carry these values with them into their adulthood. Kara has been influenced to regard her surroundings as an absolute utopia, and before she even has a chance to question her own belief system, it’s too late. Dr. Gross already has complete control over her mind and actions, once more both literally and figuratively. After she eventually leaves Founder’s Island, she ends up in a completely primitive state where she must start over and only has the teachings of others to go off of. It really adds a sense of tragedy to her character, as she carries on through her life in a state of constant naivety. Her upbringing is very reminiscent of a cult, to where you can’t really help but feel bad for her, considering that she’s constantly faced with uncertainty on a morally conscious level. And this level of morality and fairness comes into question the most when she’s faced with the individual uncertainty of her best friend Frieda. 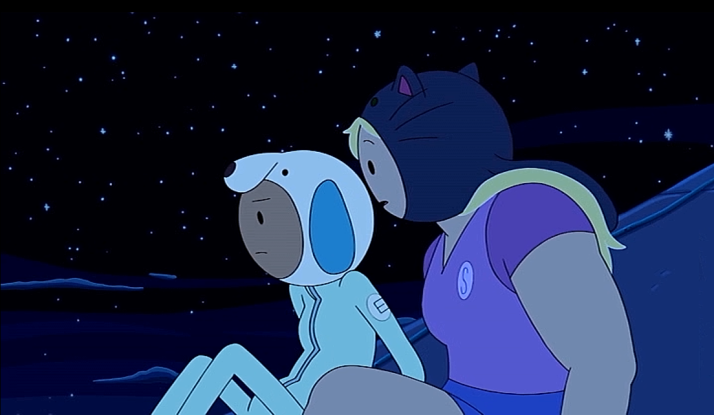 The connection between Frieda and Kara is quite poignant. I don’t really think either of them are particularly strong characters (no pun intended), per se, but their interactions can best be described as entirely human. This a miniseries designed around the lives of humans, and even in the crazy, messed up world of Adventure Time, it’s really nice to watch a simple, down-to-earth friendship with some (relatively) down-to-earth drama. They play the part of friendly opposites quite well: Kara is a rule-abiding citizen that wants to do what’s right for her community, as well as others, while Frieda is the free-spirited wild child who is more interested in something beyond her own comprehension than what she’s dealt with at hand.

The conflict of the episode is very believable and empathetic, with neither side coming across as particularly unlikable. Kara is concerned for her friend and does not want her to be hurt by what lies beyond Founder’s Island, while Frieda wants to seek out a new life outside of the sanitation of her own community. As she states, “Maybe [I’ll get hurt], but maybe getting hurt isn’t the worst thing there is.” It’s a surprisingly mature and kind of heavy sentiment that emphasizes just how controlled Founder’s Island truly is; it doesn’t seem like its inhabitants are really able to grow and flourish, as they never actually experience pain or suffering outside of their little bubble. Not to say that they should suffer, but again, to be human is to suffer. A lot of the interactions between Frieda and Kara as the episode goes along are pretty heart-wrenching, especially Kara’s non-answer of “It’s gonna be okay!” after Frieda questions her loyalty. Again, Kara isn’t particularly wrong or unlikable in this situation – she cares about her friend, but she also cares about what is morally right to do. 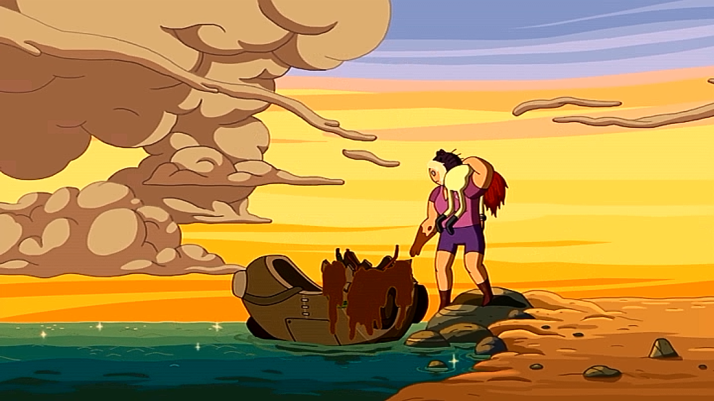 That cult aspect I mentioned before continues to play a part in Kara’s discussion with Dr. Gross. Anyone who has a different point-of-view from Gross or the knowledge of the Founders themselves is automatically seen as misguided and needs to be properly dealt with and “educated.” It’s a very controlling method of thinking, and only makes me wonder how many other innocents were harmed by their refusal towards the system. It’s made even more horrifying when we get to see how these “rebels” are dealt with, as Dr. Gross effectively manipulates Kara’s brain-chip to carry out her own bidding. I never could figure out if Dr. Gross just effectively picked up on Kara’s context clues, or if Kara herself had flat-out told her, but regardless, it’s pretty heartbreaking either way. There’s already a long, intellectual video that analyzes the meaning behind the slow motion shot of Frieda’s hat being removed, but I have my own two cents. I think Kara removing Frieda’s hat symbolically represents the hypocrisy of the Dr. Gross’s methods. She wants to follow the advice carried out by the Founders, which is to keep everyone unconditionally safe, yet the animal hats were used initially as the only “protection” for humanity during the aftermath of the war. Thus, Dr. Gross is effectively eliminating Frieda’s safety by trying to preserve it, and has become exactly what she sought out to fix. Whatever way people do see it, it’s an impactful moment that really helps to show the errors of humanity even beyond their own safe haven, and one that carries through the remainder of the miniseries even in Gross’s absence.

Hide and Seek features a sad story that succeeds entirely for its compelling story at the helm. That, and it’s also pretty visually stunning. Islands has really been hitting it out of the park with beautiful scenery and terrific landscapes. I have a couple minor nitpicks for this one: I’m not really into the super big heads they gave the children during Dr. Gross’s seminar – it felt more like chibified AT fanart than what I actually imagined human children would look like. There were a couple moments where I felt like Frieda’s VA could’ve done better during her emotional breakdown, but she did pretty well for the most part of the episode. The only other complaint I have is that I wish we saw more of Gross after this episode, but hey, can’t blame the series for that! I guarantee that if it continued, Gross would’ve had a bigger role down the line. Otherwise, it’s a lore-heavy entry that is packed with drama and sadness, and one that keeps me fully invested from beginning to end. The next episode is my favorite of the Islands miniseries, and I cannot wait to discuss it in more detail.

Favorite line: “I think she’s, uh, getting ready to sleepwalk-sleep.”