This is a big one. This is the game-changer for most viewers, as it was for me at the young age of thirteen. The stakes are instantly raised in this episode with the introduction of the Lich as a major villain. We’ve previously seen him in His Hero, but this is the first time we truly get to experience the Lich as a villain. His presence in this episode adds new heightened danger that Finn and Jake aren’t typically used to dealing with, and this time they aren’t just facing a threat to save a single princess or candy person. As Jake acknowledges, they’re fighting for the sake of the entire world. 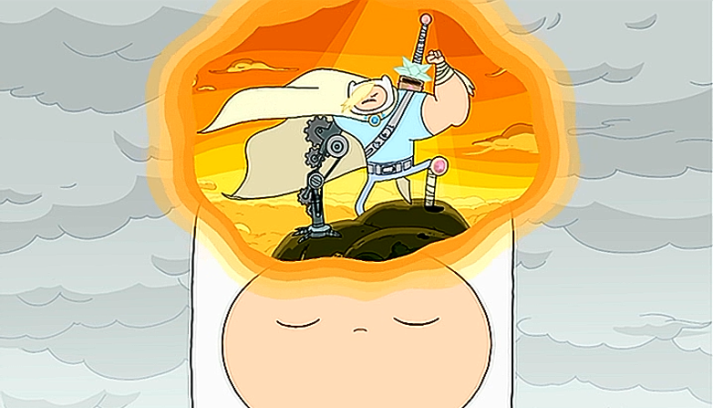 Immediately we’re thrown into the action, with brief meditations seen by both Finn and Jake. Most notably, Finn imagines himself as a big, bulky hero (including a pretty sick bionic arm) showing that his view on true heroes is still a bit materialistic. As Finn has learned countless times throughout this particular season, a hero is not defined by shape, size, or glamour, and while he has begun to grasp this concept, he still is drawn to those attributes that legendary heroes such as Billy possess. As His Hero displayed, Finn was able to prove himself as a true hero by choosing his own path over the path of his mentor, and it’s appropriately fitting that Mortal Folly has him following in his mentor’s footsteps once again by facing off against the ultimate evil.

After we’re treated to a nice bit of lore and backstory regarding the Lich and Billy, the snail that appears in the background of every single episode frees our grotesquely designed villain from his prison. This really is terrific use of the snail as a plot device; it’s rewarding to those who have been paying attention long enough to notice the hidden snail, as well as a way of building up apprehension by having it possessed. Every time it appears after this, there’s a certain fear of what’s to come and a constant reminder that it’s still a part of the story. But before we get to that, the Lich’s place in this episode is eerie and unsettling, fitting with his appearance that’s especially grotesque and diverse from most other designs in the series. While working on this episode, Sugar and Muto tried to avoid any typical villain cliches as possible to make the Lich seem menacing and serious, and a big kudos to them for pulling it off so well.

Of course, the episode isn’t entirely focused on tension and darkness. At the center lies a large heart with the relationship between PB and Finn. Although, it is kind of off when you think about it. I know Finn is considered a legendary hero in Ooo and he does ultimately end up defeating the Lich for the time being, but you’d think with all of the life experience Bubblegum possesses, she wouldn’t send a thirteen-year-old out to preserve the fate of the universe. But of course, these were different times, so I can ignore it. It doesn’t divert from the adorable amount of compassion for each other that the two share, and there’s no way you can convince me that PB doesn’t care about Finn in this situation. The sweater she gives him, whether it was meant to be protective from the Lich’s powers or not, was an ultimate token of her appreciation for Finn, and it’s really sweet that he has no hesitation wearing it at all.

On the other hand, if there’s one thing that constantly brings down this episode, it’s Ice King. Not to say he’s without his funny moments, but his interference with Finn and Jake really diverts from the main focus of the episode. I understand that they had to break the episode up a bit and it was completely necessary to include Ice King in it, but from a viewer’s perspective, it really takes you out of the moment when our two main heroes are on an epic quest to save the world and IK continuously gets in the way of it.

Thankfully, the last third of the episode is primarily focused on the main issues at hand. I love, love, LOVE the abandoned subway setting. It makes for such a cool and well designed battle arena, and is just oozing with post-apocalyptic eye candy. Love the skeletons, love the colors, love how it’s not even explicitly mentioned as a subway. Things get serious when Billy’s gauntlet is crushed by the Lich without any hesitation at all, which is kinda fucked up when you think about it. That gauntlet was totally sentient! It blinked! The atmosphere immediately grows quiet and blood curdling when Finn’s pendant breaks and we get our first-ever bit of dialogue from the Lich, delivered menacingly, yet attractively by Ron Perlman.

It’s important to remember that, save for a few moments, we never really get to see the Lich do much of anything destructive throughout the series. Sure, it’s implied he had a big part in the outcome of the Great Mushroom War, but aside from that, everything that is threatening about the Lich comes entirely through his design and his voice. This makes him one of my favorite animated villains of all-time. We only get to see him every so often, but every time we do, we know this guy has potential to blow up entire worlds if he wants to. We know that he can’t be defeated anytime soon. We know that he could set off countless Mushroom Wars with the snap of a finger. Most importantly, we know that the Lich is the ultimate evil. Not through his actions, not through his adversaries, not through his treacherous backstory or anything like that, but simply because of his demeanor. He has no motivation for wanting to destroy all humanity besides the fact that he can and wants to. And there’s nothing scary than that.

But of course, the one thing that protects Finn from potential destruction is the sweater PB made him. It’s sweet, because they didn’t pull some twist that the sweater has protective armor or guns shooting out of it or anything like that. It’s just a sweater. And that, coupled with Finn’s feelings of l-l-liking someone a lot, is what is able to save him in the end. Again, it’s easy to draw contrasts to Billy and Finn here. Billy was able to defeat the Lich with his gauntlet, whereas Finn failed to the first time he tried. It’s obvious that Billy’s power comes almost entirely from his brawn and strength, while Finn’s ultimate power comes from his heart. It’s a corny but important lesson that’s been enforced many times this season, and this feels like an ultimate driving point. It Finn’s sweater that defeats the Lich, as he lets out a final laugh that’s evidence enough that we won’t be seeing the last of him. It’s a triumphant moment of victory for Finn and Jake, but the moment doesn’t last for long, courtesy of the IK’s “dropsies.”

So there’s a good chunk of really good moments surrounding the main plot, and a good chunk of mediocre moments in regards to the Ice King’s bits. There’s still more than enough for this to be considered as a good episode. Terrific atmosphere, intense action, some brilliant character moments, and a very nice jaw-drop worthy ending in preparation for part two to boot.