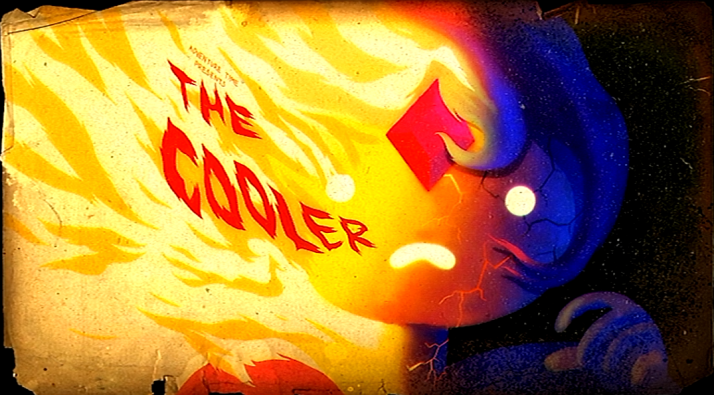 I had actually started to miss Flame Princess’s character during this point in season six. I definitely don’t love Flame Princess by any means, but I had grown fond of her over the course of season four and five, and knew that it was inevitable that she wouldn’t be appearing as much. It is nice to see, however, that her star appearance in this episode has absolutely nothing to do with Finn, which is exactly the type of spotlight I wanted for her character. And it doesn’t disappoint, developing on the already established dynamic between FP and Princess Bubblegum. 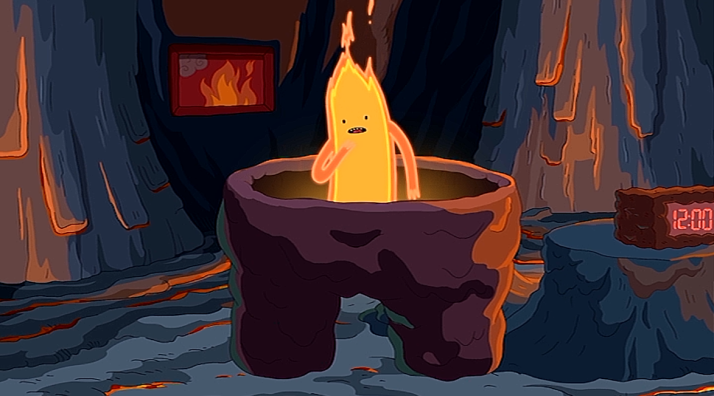 The cooling of the Fire Kingdom provides for some pretty funny interactions between its citizens, which is a given, as no Cole Sanchez/Andy Ristaino episode is without its laughs. Among of the funniest of these citizens is the guy who can no longer fit in his pants and the two brothers who tragically merged bodies with each other. The cooled down kingdom in general looks pretty awesome; we’re so used to seeing the Fire Kingdom engulfed in red, orange, and yellow, but The Cooler provides for a more subdued landscape, shadowed with gray and blue color schemes. It’s a nice shift from what’s expected from this location and helps set the mood for the rest of the episode.

One of the most noticeable changes in Flame Princess’s character is how she’s drawn to look more mature and adultlike. Of course, this is more-or-less a complement of Cole Sanchez’s storyboards, as Andy Ristaino resorts to a squishier, more rounded depiction of the character in the second half of the episode, but Sanchez’s efforts still pull through as effective. I like seeing her more competent and comfortable in her role as a ruler, and it’s the first time we truly get to see her from a political viewpoint. In fact, the entire conflict in the episode could be interpreted as a political standpoint, and while I previously mentioned back in Ocarina that I thought AT should never incorporate politics, I think it’s handled in this one relatively open-ended. Politics can be especially tricky with any show aimed at children, just because any topic that leans one way or another can easily come off as propaganda and fail to be challenging in the slightest. OK K.O.! Let’s Be Heroes is another great series currently airing on Cartoon Network, but one of its episodes suffered from the reasons aforementioned. The Cooler cleverly presents the conflict based on how each character featured would act in a situation that could possibly imply war, and feels much more in touch with Flame Princess and Princess Bubblegum’s behavior rather than trying to force a direct message that seems out of character.

It’s also pretty cool to see Flame Princess’s family back again! They had previously made a brief appearance in Jake Suit, but they get a true chance to shine in this one. I really love all of their quirky personalities; Aunt Agnes and Randy are two likable dimwits, and Flint is enjoyable in his hot-headed personality. Flint somewhat represents the side of society that simply thinks destroying/invading other bodies of land is the easiest solution in times of crisis, though it is pretty cool to see that this idea is not immediately turned down as completely irrational. Of course, Flint is hot-headed and beyond reason, but Flame Princess states that she’s prepared for any type of action if it means protecting her kingdom, which I thought was actually kind of nice to see that violence isn’t immediately shut down. FP hasn’t been opposed to violence in the past, and it makes sense that she wouldn’t be opposed to it in the present either. Yet, she has grown to be more intelligent, and knows how helpful Princess Bubblegum could be as an ally. Her desire to do what is best for her kingdom also helps to connect her character to Princess Bubblegum later on, showing that the two aren’t so different in motivations. Really adds depth to her character. Contradicting intelligence, however, is Cinnamon Bun, who seems to be back to being slightly incompetent in this episode. It’s strange, because I guess you could attribute this to the cooling process, but later episodes have showcased CB outside of the Fire Kingdom and he still retains his newfound intellectual abilities. I’ll let it go for now, though, because it at least makes sense in the present moment.

The connection between Flame Princess and Bubblegum is presented quite interestingly in this one. Keeping in touch with Flame Princess’s flat-out honesty, I enjoy how she tells PB upfront that she genuinely does not consider her a friend and that she merely wants to keep things professional and non-personal. And who could blame her? Though FP originally went along with PB’s experimentation in Earth & Water, she later discovered how untrustworthy PB can be and quite “devious” at that. Princess Bubblegum doesn’t really do anything to disprove this theory during her meeting with Flame Princess, as she uses manipulation and the promise of friendship as a means of trying to get FP to let her guard down. Of course, this fails, though PB would later use this manipulative behavior in a different way once the two come across the Sleeping Fire Giants. 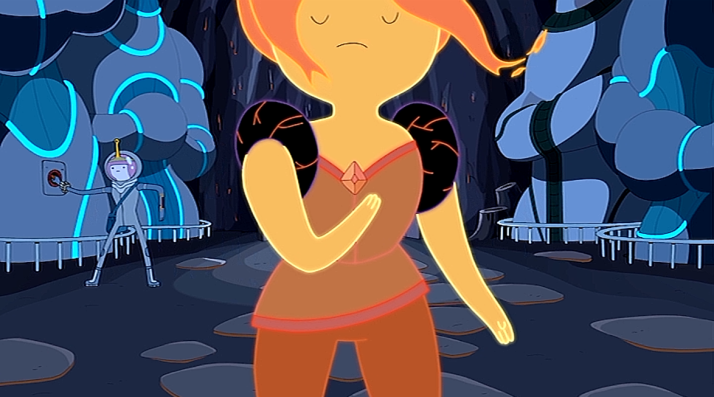 The backstory of the Fire Kingdom is briefly explained through Flame Princess’s very first song, A Kingdom from a Spark. It’s all cool stuff, and adds significance, as well as great power, to the identity of the Sleeping Fire Giants… I only wish the song had been a bit less awkward. Yeah, I’m not really a fan of it. Jessica DiCicco’s singing voice isn’t awful by any means, though the tune of the song itself isn’t really presented in a catchy or interesting way, and the lyrics just feel like a jumble of mismatched sentences that don’t even really deserve to be in a song sequence. I think I would’ve liked this bit better as spoken word, as it would make for a less uncomfortable experience overall. Though the song is there primarily to distract FP from Bubblegum’s tinkering in the background.

I think Bubblegum’s fears and paranoia of Flame Princess possibly using the Fire Giants to blow up the kingdom are very much well-defined and reasonable, even though she is clearly wrong and beyond her boundaries. Though, isn’t that kind of cool as well? Bubblegum is obviously shown in the wrong for dismantling a weapon that could potentially destroy the Candy Kingdom. Again, the episode does its damnedest to spread across a message that exemplifies the importance of trust, rather than the disregard for potential violence. Flame Princess would likely never consider the destruction of the Candy Kingdom because of her ties to Princess Bubblegum, and even taking into consideration the feelings of Cinnamon Bun and his relations to the Kingdom. PB put herself and her kingdom in an even further state of jeopardy by simply not allowing her fears to subside. Though again, this isn’t really totally despicable for PB herself. She cares for her kingdom and wants to make sure it is in the greatest state possible, even if it means that her methods of protection become self-destructive.

What brings this episode down a slight notch is the entirely stupid way the Sleeping Fire Giants are disposed of. Like, there’s the somewhat believable way it’s carried out when Princess Bubblegum uses her shield to block FP’s shots, but there’s moments where Flame Princess COMPLETELY misses PB and knocks two Fire Giants out instead. I get that she lost control of her anger, but this form of recklessness just made her seem completely oblivious. I have trouble that Flame Princess would be careless enough to destroy the one thing that she went on and on about its importance.

Bringing it back down to the more rational side of things, Bubblegum finally comes clean and reveals that she was the one behind the cooling process, which upsets FP. For the longest time, Princess Bubblegum has looked at her tendency to spy on others and her manipulative attributes as mere quirks and nothing more, though this is the first time someone is directly calling her out on being a shitty person. PB likely has acknowledged in the past that she may be going too far with her invasiveness, though she always had the reassurance that everything she did was for her Kingdom. Only now is she realizing that the consequences of her actions not only cut off potential allies, but potential friends as well. FP was willing to give Princess Bubblegum the benefit of the doubt and to trust her, but PB has become so disconnected and out of touch with people that she couldn’t even manage to be respectful and trustworthy. It’s this realization that causes PB to allow one Sleeping Fire Giant to remain, in hopes that Flame Princess will understand where Princess Bubblegum is coming from. Honestly, I think PB is let off a bit too easily, and I think it would have been slightly more effective if Flame Princess just passively let Bubblegum go, leaving her with her own fears and anxieties of the future, but without direct validation of safety. Granted, I think Flame Princess’s more understanding side is used to her advantage, as she finally reveals her first name: Phoebe. It mirrors Bubblegum’s question earlier in the episode, and shows that Flame Princess is willing to consider Bubblegum her friend, if she merely chooses an honest path over one of deceit and shadiness. And look at that, she got Ice King in on the whole thing too! Thought that was a pretty hilarious reveal, by the way. Though would Ice King logically be able to produce frost in the heated atmosphere of the Fire Kingdom? It’s up for debate.

The episode does leave off centering around PB’s lingering feeling of discomfort, and it finally has her coming to terms with her invasive nature. She cuts the line completely to her security system, with a promise of never returning to her spying nature. I think it’s a pretty effective moment in PB’s developmental path, and it really doesn’t come across as too irrational for her character. It doesn’t downplay the importance of general surveillance, but shows that PB is starting to realize that she doesn’t need to keep an eye on every individual member of her kingdom at all times. Finn and Jake are free to serenade each other with the Food Chain song as much as they like, without PB watching their every move. It’s a huge jump for her character, and though she chooses to make the right decision, the latter half of the season would prove that this choice may have been too little, too late. Even if Peebs is willing to change, it will take a lot for her Kingdom to notice and accept these changes.

The Cooler isn’t perfect, but it’s thoroughly entertaining and capitalizes on a truly interesting dynamic. Again, I didn’t think this episode tried to preach anything too heavy on the political side, as it focused more on showcasing how its two lead characters treat honesty and respect. This would be Flame Princess and Princess Bubblegum’s last episode interacting with each other, though it’s a perfect time for their characters to separate, as Bubblegum becomes consumed with her own identity crisis. Flame Princess is the most brutally honest character to face off with Bubblegum’s shady nature, and The Cooler uses this conflict to its advantage. It’s Flame Princess’s only star role in season six, and though that’s somewhat of a sad thought, I think her presence is used in the best way possible, and helps her to develop by diverting her attention away from Finn.