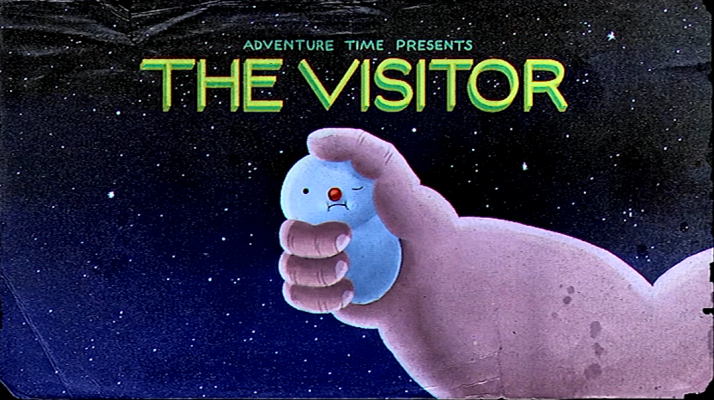 A lot of people were disappointed by The Visitor, either because it wasn’t raw and emotional enough (this was aired side-by-side with Steven Universe‘s On the Run after all, which was a terrific episode) or because many felt we didn’t learn anything particularly new about Martin. While it’s true that Martin is pretty much still just an irredeemable asshole, it does at least show how much Finn’s attitude towards him has changed over time. Finn no longer simply wants to force his dad to be in his life, nor does he want to extract revenge, but Finn still seems, at the very least, confused. He still doesn’t completely understand why Martin is such an utter piece of shit and why his father abandoned him, and Finn doesn’t have any idea about the truth behind his origins. This episode answers some of those questions… with mostly unsatisfying answers… but I’ll defend The Visitor in that I think it’s a very intriguing interactive episode between Finn and his father.

The episode begins with another dream sequence to add to Adventure Time‘s absolute dream fetish quota. As usual, the sequence is pretty stellar and trippy, with allusions to Finn’s childhood self and the nature of his being. The sperm-y comet in his dream directly leads him on a path to Martin, as Finn carries his buff baby self. As the baby clings onto Finn and asks him to hold tighter, Finn responds, “it’s okay, I won’t ever let you go.” I saw this both as an allusion to Finn never giving up his childlike innocence, and also his failure to let go of his past history as a baby. Finn is still deeply affected by the fact that he was abandoned as a child, and he simply wants to know what the reason is behind that abandonment. It takes a long bit of time for him to truly move on from this aspect of his life. He acknowledges his statement in his mind by thinking, “that’s true.”

When finally confronted with his father once again, Martin seems as scummy and conniving as he did in Escape From the Citadel. The first shot we actually see of him depicts Martin eating the contents of a baby bird’s egg, and promptly spits the feathers out of his mouth once Finn enters the tree. Isn’t he just delightful? Martin also once again tries to divert Finn’s attention away from himself, though he fails entirely, and Finn figures his scheme out. The one difference between Martin’s original appearance and his role here is that he isn’t trying to get away from Finn with every chance that he gets… though he does try to at some points. Here, I think Martin is at least trying to bond with Finn, but he’s doing it entirely for himself, and not for Finn’s well-being. He wants to make himself believe he’s putting in the work of being a caring father, but doesn’t actually seem to care if he is one or not. And again, it seems as though he’s trying to find as many distractions as he possibly can; after crash landing on Earth, he immediately wants to return to space once more, because nothing beneficial is around for him on Earth. Or at least, that’s what he thinks.

During this meeting, Finn isn’t entirely angry or furious with his father. He had gotten over the fact that Martin was the reason he lost his arm initially, and knows that revenge won’t bring him any form of satisfaction. Though, this doesn’t stop his general disgust from showing as Martin tries to hug him after tricking Finn into thinking he too lost a limb. Finn is rationally upset because he feels as though he can’t trust Martin for anything, and he’s only more-so disappointed by the fact that Martin assures him that he’ll never be able to tell the difference. One of the cleverest bits of Martin’s character is that you can never tell if he’s being sincere, or completely lying. Stephen Root’s work with Martin is great, because every line comes off as genuinely charming and affectionate, even is he’s being a complete asswipe. It’s an effect that not only works on the characters in this universe, but on the audience as well.

The villagers that Martin and Finn come across are pretty charming; their designs are super simplified, but their nature and character traits are actually somewhat profound. I kind of love that they’re smart enough to know that they’re being tricked, though they want to help out as much as they can just because they’re simple nature has allowed for them to become altruists. It’s pretty cool to see citizens of an area in Ooo who aren’t blatantly stupid or irrational, and some who are actually quite bright and humble in contrast. Fun fact: almost all of the guy villagers are voiced by Tom Herpich, and almost all of the girl villagers are voiced by Tress MacNeille.

Most of the episode revolves around Martin manipulating the villagers into doing deeds for him, and while it’s relatively one-note, it’s all pretty funny to watch. I love seeing Finn’s absolute dead-pan reactions to all of Martin’s endeavors. The best part of it all is easily the party he throws for the villagers, in what is supposed to be a happy celebration, though everyone in sight looks like they’re either in pain, or absolutely miserable. Really paints Martin to be like an absolute monster, as it should. Even when he’s trying to do something for others, he still always selfishly puts himself first.

Though at the party, he does set aside time for his son, as Finn begins to grow introspective and wants to know some details about his past. Martin initially bats around the questions aimed towards him, though quickly grows to being genuine when he does acknowledge how much it means to Finn. This is probably Martin at his most sincere, and likely the most sincere I’d ever want to see him. Though as he proves, he can’t even really conquer sincerity the right way, as he just vaguely glances over key details in the story of Finn’s early days. It does add a bit of depth to Martin’s character, as he acknowledges that talking about Finn’s mother “stresses him out.” Again, not much is given when it comes to the concept of Finn’s mother, though we can at least gather that Martin did truly care about her at one point, and it’s a touchy subject for himself. It can be concluded that he’s the type of dude who has grown to eliminate anything even remotely stressful from his life, simply because, after all the traumatic things he’s been through, he doesn’t want to experience anything quite as emotionally taxing again. He does pull off the gist of Finn’s story quite nicely, and ends with, “I always planned to come back for you, but I didn’t.” Martin acknowledges this statement by mirroring Finn’s line earlier, “that’s true.” It’s a small, but huge moment that shows that, while Martin is a polar opposite in comparison to his son, the two do share at least one aspect of sincerity. Of course, Finn’s statement was about never letting himself go, while Martin’s statement related to actually letting Finn go, but it’s the one moment where Martin is completely and utterly honest with his son, and while it doesn’t lead to any actual development in Martin’s character, (which I wouldn’t want to see anyway) it does at least offer us a single scene in the grand scheme of things where the two characters are able to be somewhat real with each other.

This doesn’t last very long, as Martin plans to leave on his ship (christened as the “Minnie”!) after leaving the entire village in absolute despair. He attempts to ditch Finn without even saying goodbye too, but also in a rare moment for himself, he invites Finn to come along with him in space. Granted, I don’t think this invitation is met with the same sincerity that his previous interaction was; I think Martin simply wants to use Finn as an ally and then to ditch Finn when he is no longer of use to himself. Finn is smart enough to now to know this truth, and instead of joining Martin in an attempt to either get closure or to bond with his father, he chooses the path that he knows and one that has benefited him in his toughest times: being a hero. And it also means sending his father directly into space, as far away from Finn as possible. Finn no longer feels like he needs Martin’s validation or love to move on with his life; Finn has a handful of other emotional support options to fall back on, and he realizes that his dad is genuinely a bad person. It certainly doesn’t make Finn whole completely, but he’s continuing to develop on himself by choosing to eliminate negative influences from his life, rather than to bounce back on them. In the end, he reigns a hero once more, but is confused about the lack of an actual comet that appeared in his dream. Little does Finn know, the actual convergence of a catalyst comet approaches shortly.

The Visitor is a good combination of funny and sad moments, with most of its poignancy reflecting just how awful Martin is to Finn and that Finn is still primarily deeply confused. It does end happy, however, with a positive step forward in Finn’s life path, and one that continues to increase his affirmation for life in general. Granted, I can see how a lot of people were disappointed with the lack of actual answers we got with Finn’s backstory, though I think I’m more so satisfied knowing that those answers are confirmed later on in the series. As is, The Visitor is an entertaining entry that focuses on the differences between Martin and Finn, yet cleverly also touches on their few similarities. 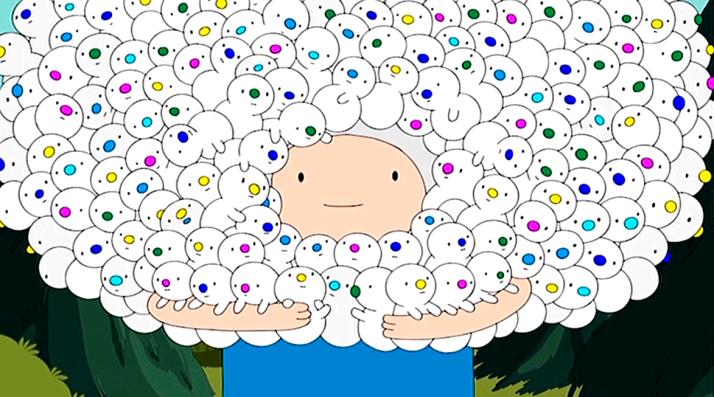 Favorite line: “Everything is ruined. Everyone is fat.”