Before diving into this review, I think it’s important to discuss a little bit of this episode’s history and how it actually plays into the rest of the series. A preview (aka, the first five minutes) of this episode initially aired at San Diego Comic Con back in 2016, and I remember being a bit taken back by what I had seen. After the course of season seven, it really seemed like the show was beginning to slowly wrap up, with many ongoing arcs closing up (PB’s morality, Finn’s aging and resolution with Flame Princess) and many others that are consistently hinted to be wrapping up (Ice King being “cured,” the possibility of another huge war at the hands of Patience St. Pim). The five minutes shown seemed to open up yet another door for exploration when there was already so much on the table that needed closure, and with the additional revelation around the same week that there would be a ninth season of AT, I was really starting to become under the impression that the series was never going to end and that it would eventually lose the luster that made it so special to begin with. I had spoken too soon, apparently, as it was revealed under two months later that Adventure Time had been canceled by Cartoon Network. This was news that was certainly bittersweet for myself, as I was confronted with the idea that my favorite show would be ending, but also that it meant that things would be wrapping up before I had lost interest or investment in the series. As a few more months passed by without any news regarding new episodes, Preboot and Reboot were slated for a November airdate, and Tom Herpich had posted on tumblr in reference to the remaining episodes. He mentioned that, after Preboot and its sister episode, “everything starts rolling into one big snowball that rolls and rolls all the way to the end.” I was struck with curiosity by this statement, but cautiously optimistic. I remember hearing reports back during season six that Escape From the Citadel was stated by the staff to break the status quo entirely when that simply was not true. Though, looking back now, Herpich’s statement really did deliver! I won’t say that everything ties together perfectly, but for the most part, Preboot and Reboot really are a turning point for the series. AT’s relationship with the status quo was the one thing that was holding it back from telling all of the stories that it wanted to tell, and I feel as though the transition into (almost) full serialization is the best possible move and reward for fans at this point in the series. Really feels like a treat for everyone who has been paying attention up to this point. So, without further ado, we have yet another episode that changes Adventure Time as a show forever: Preboot.

The beginning of this episode is always weird for me. Like, I had always assumed that the Comic Con preview started a minute into the episode or something, but it’s actually the start and jumps immediately into the situation. I usually enjoy when AT throws us into weird situations with no exposition, but it kind of feels like a part of the episode is missing in this case. Was it at PB’s command? Was it a request from the Hyoomans? Definitely could have used some more context clues. I do enjoy their brief excavation, however. Jake genuinely wanting to be cursed is just classic Jake, and Finn thinking that horses used to have poles in their spines before the Mushroom War is classic, dumb Finn.

Things take a very abrupt turn when the assumed to be dead Tiffany pops out of the ground in a narwhal shaped shuttle. Not only did he get a sick new bionic arm, but he’s also going through puberty! Good on him. This is one of Tiffany’s better appearances, though Colin Dean’s voice shift does weigh it down a bit. It’s not like it’s his fault or anything, but it’s really hard for a child voice actor to capture the same charm that they once did before their balls dropped. Of course, it’s different for a character like Finn, who’s actively aging and evolving with each passing episode. This shift reminds me more of Chowder’s shift in Chowder, or Jeff’s shift in Clarence, it feels like some kind of whimsical magic was lost during the change that just can’t be recaptured anymore. 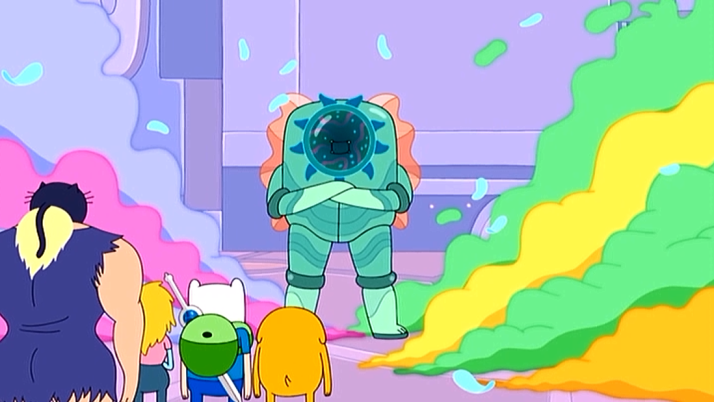 Aside from Tiffany though, we’re also introduced to Dr. Gross, a character that is pretty cool in her general design (both initially and post-suit removal) and ultimately decent in her motivation. I feel as though her presentation is a little too obvious in this episode, in the sense that it becomes pretty obvious early on that she will be an antagonist towards Finn and Jake. Hell, the episode doesn’t even really try to hide it – Susan is adamantly opposed to Dr. Gross’s behavior and surroundings from the start. As a villain, she’s alright. I think her motivation becomes more clear and somewhat twisted in subsequent appearances, though here, it’s pretty base level stuff. She wants to utilize Finn in order to help to bring himself (and others) into a new golden age of humanity, featuring various different mods and altercations. But after they (very quickly) escape, she kind of just decides that she wants to kill the gang and use them for spare parts instead. I guess it’s supposed to paint her as crazy, but it kind of weakens her character if she’s not given consistency with her motivation. I mean, Finn and Jake were never into the idea of being operated on the begin with, how would their attempt to escape change literally anything? It really seems like her presence in this episode is to merely set up her backstory for future episodes down the line.

Though, her dystopian lair and menagerie are pretty terrific, albeit the song sequence, which is just okay. A lot of the lyrics feel forced and hardly catchy, though I do dig the electro-funk tempo in the background. The animal hybrids are too a lot of fun, with my favorite being the Wolf Lards, who have the “high endurance of a sea lard combined with the bloodthirsty killer instincts of a sea lard.” That was just priceless to me. There are a few other nice editions; I love the scorpmunk that can talk and instead uses dancing to warn others of danger, the return of Clockbear after his debut in Hoots, and the apple with a humanistic face, of which I’m preeeetty sure was based off a child’s drawing for the Make-A-Wish Foundation, but I couldn’t find the information when looking for that fact, so hey, you guys can confirm that for me!

This scene always weirds me out. Finn and Jake are fucking huge compared to Dr. Gross!

I mentioned this episode setting up for Dr. Gross’s eventual subsequent role, and that’s pretty much Preboot in a nutshell. Not only is it set up for the following episode, but also for future episodes involving Finn’s destination to find other humans. It was admittedly funny to see Finn’s shock about the existence of other human beings, only to contradict himself by mentioning just how many humans he’s actually met over the course of the series. Though, I do have to bring up that it’s a bit contrived that Finn doesn’t mention Susan. He declares in the following episode that he didn’t know she was part cyborg, so wouldn’t his assumption be that she truly is human after the events of Beautopia? I get that they had to play around with the mystery elements for the sake of the story, but I feel as though this is info that he should downright know by now.

And as a whole, Preboot essentially is one big mystery element. It plays around with a lot of ideas and concepts that haven’t yet been answered, and also adds even more questions than we had before. In fact, Preboot alone probably contains the most amount of questions in a single Adventure Time episode yet, of which are answered shortly after, thankfully. Though, it’s kind of hard to go back into this one knowing everything that I know now. It’s got some funny jokes, fun action sequences, and sweet locations, but its ultimate goal is to build on exposition and facts about the past and future of the series that mostly tease viewers into wanting to see more. So when I find did get more, I was satisfied, but there isn’t a ton that draws me back into this one aside from those scattered fun moments throughout. The main goal of this episode is to set up a mask of ambiguity to once again pique the interests of AT audiences, but ultimately sacrifices a portion of entertainment in the aftermath. I truthfully ended up enjoying the second part of this episode, Reboot, more for various different reasons. You kids can read all about it here!

Favorite line: “Crisis Another critical life juncture in the ongoing saga that is Tiffany.”