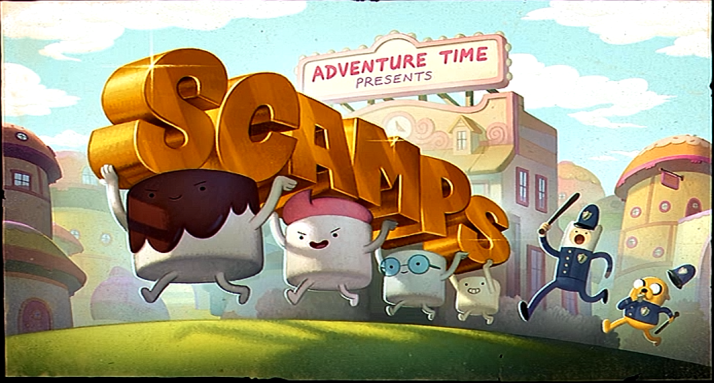 The first half of season seven is comparable to the first half of season five, in a way. While not bad in any way, shape, or form, season 5.1 was filled with a lot of decent to good episodes, but very few that actually stood out as exceptionally hilarious or dramatic. In the same vein, the first half of season seven has had Football, Everything Stays, May I Come In?, and The More You Moe, The Moe You Know (and I just miiight throw in Varmints as well) while the 20 or so other episodes have ranged from mostly decent to just generally good. Not to say this is a bad thing; season 5.2 and season 6 contain some of the best episodes of the series, and also a handful of the worst episodes of the series. Thus far, the only episodes of this season that I would consider “bad” are Cherry Cream Soda and Checkmate, so it really does not hurt to get treated to a series of mostly decent or pleasant episodes that are mildly inoffensive in their own right. But at the time, it did have me longing for some of those really strong entries that season six was churning out. I mention this because Scamps is perhaps the last fluff episode of season seven, and we start getting some exceedingly terrific entries from this point on. It’s hard for me to actually think of a single episode after Scamps that isn’t intriguing on some level (that’s not to say there aren’t any criticisms to be had, however) and I really look forward to entering the second chapter of this season. For now, we have Scamps, which again, isn’t terrible by any means, but probably equals Paper Pete‘s level of “so unimaginably simplistic that I nearly forget it exists.” Seriously, I have trouble thinking of anything that actually stood out to me in this one.

The Marshmallow Kids are… odd characters to introduce at this point in the series. The episode actually opens with a mini face-off between the Marshmallow Kids and the Notorious Pup Gang, and it really made me wonder… why the fuck didn’t this episode just star the Pup Gang? They’re already established characters and criminal adolescents with nearly identical backstories, I have no idea where the concept came from to introduce a set of entirely new characters (of whom we’re never even going to see again) just for the purpose of this episode. They’re cute in their antics, I suppose, but are all pretty interchangeable and don’t really have any defining personality traits outside of being swindlers. The only thing noteworthy about them that I actually realized while rewatching this episode is that one is voiced by Max Charles, who portrays the titular character in Harvey Beaks. It was nice to hear his voice in something else, and it actually surprised me to see that Charles is featured a lot in other television roles.

Finn’s part in the episode is pretty nice. It’s just cool to see him in the role of caregiver in general, and after all of the growth that he had experienced from the previous season, it’s even nicer to see that he’s a better teacher to children than his own father was to him. The way he uses genuine survival tactics as a method of tricking the children into scamming is pretty cute, and in the most “Finn” way possible. Honestly, the one thing that bothered me the most about Finn in this episode are his facial expressions. I really, really hate this gambit of having to shit on Somvilay in every single episode he works on, because the guy has some honest to God great stuff coming up, but the way Finn’s eyes and mouth are distanced from each other when his face is shown is truly offputting. It’s almost like Somvilay was working off of Herpich’s method of drawing Finn’s facial expressions, but took it one step beyond in a way that just makes Finn look really wonky and unnatural. I know you’re a professional who could probably care less about the opinion of some dork on the internet, but my apologies, Somvy. I promise I’ll show you justice in the future.

There’s a few other things I like about this one; PB’s voice memo to Finn, and her outfits in general (momma’s lookin’ good) are pretty great, and Jake’s brief role was priceless. I love how much Jake’s changes in lifestyle are emphasized in the beginning of the episode, and then retroactively retconned by the time he realizes how successful he can become. That boy couldn’t stop loving crime all together even if he tried.

The two things I like most about this episode are actually on a technical level. As always, the backgrounds and colors look beautiful, especially the transition from daytime to night. Also, Tim Kiefer’s score throughout Scamps was on point! He uses really distinct trumpet sounds to go along with the personalities of the Marshmallow Kids quite nicely, in a way that actually reminds me of Ed, Edd n Eddy (wouldn’t be surprised if that’s where Kiefer got his inspiration for this one). 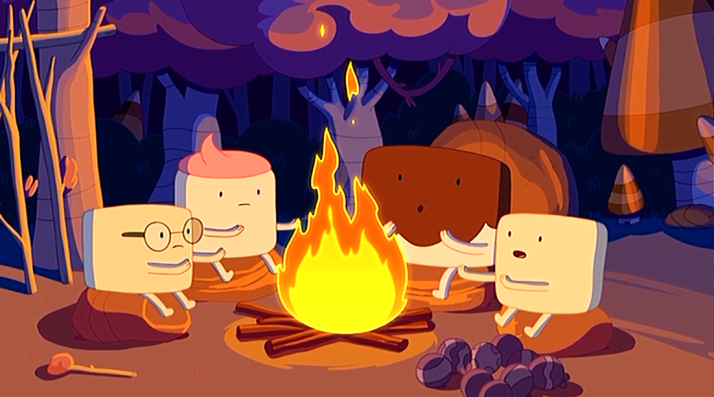 Otherwise, this episode is just entirely forgettable. Similar to Paper Pete, it’s hard for me to trash it completely, because I don’t find it unbearable, but it’s so uninteresting in its story and execution of events. There are very, very few jokes, the Marshmallow Kids are particularly unremarkable, their relationship with Finn, while cute, is just kind of generic, and it fails to stick out to me in its humor, story, drama, or anything else it has to offer. Similar to The Pods, it’s a straightforward story that could have been done on pretty much any other show. When I think of Adventure Time, Scamps is one of the last episodes to actually come into my head.

Interestingly enough, Scamps is actually Adventure Time‘s peak in viewership. This episode garnered 1.45 million views, a feat that no other episode of the series since has been able to accomplish. Granted, CN’s poor television marketing and the decline of cable in general could easily be at blame for this, but it’s still humorous to think that this episode was the dropping point for AT in terms of viewership.

Favorite line: “Ya know, those Marshmallow Kids remind me of you when you were a young lad.”