Ice King’s more sympathetic side has mainly come from his tragic past history as Simon Petrikov, as well as his relationship to Marceline. However, there still is the side to Ice King that is deeply troubled and creepy, especially when it comes to his special interests in capturing princesses. In this episode, the IK’s obsession with his favorite princess finally blows up in his face and sends a message to him, allowing him to actually make some changes in his life, with the help of new companion. Of course, these changes are only temporary, but nevertheless, it’s a pretty satisfying Ice King experience. 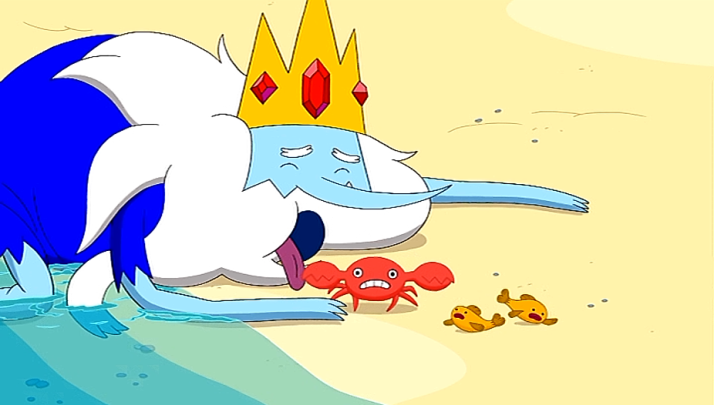 Right off the bat, there’s a nice change of pace with the episode taking place mostly on the island (more specifically, Isla de Señorita) with only Ice King, the Island Lady, and Party God being heavily focused on. Finn and Jake are once again demoted to background characters as they were in the previous episode, though it’s a change that, with most AT episodes, isn’t dreaded for the creative and experimental results that come from these types of episodes.

And the focus of the episode is really nice; the relationship between Ice King and the Island Lady is quite sweet, and I love the angle the episode takes on Ice King’s personality. The biggest takeaway from this one is simply how well Ice King is capable of sanity and more socially acceptable behavior when he just has a loving, caring friend by his side. In fact, Ice King’s analysis of PB’s issues is actually pretty fucking spot on! “Yeah, well, PB is just so closed off to her emotions, she crushes the relationship so she doesn’t ever have to develop feelings,” is a really accurate way of describing Bubblegum, and this is coming from Ice King of all people. I think it’s another valid point to show that, despite his insanity and social ineptitude, he does show signs of random brilliance and intelligence, possibly showing that parts of Simon do shine into his subconscious at times. Also, I thought it was a really nice touch that they didn’t force a mutual romance into this one with the Island Lady and IK; it would’ve been the much more predictable and somewhat unrealistic route, and once again, I’m glad it showcased the one crucial component to Ice King’s mental health and maturity: having a strong friendship.

The Island Lady herself is somewhat of a blank slate. I do love her design! It’s really inventive and seems like something that would come out of an indie short film. Though, she’s not really given any sort of a personality. But it’s not really an issue of the episode; the main focal point is, like I said, to showcase a more emotional mature side of the Ice King, and it works out pretty damn well, so I don’t really mind that Isla de Señorita’s a little bit dry (no pun intended). I do quite enjoy her singing voice as well, though the song in this one isn’t a particular favorite of mine. It’s pleasant and has a nice beat, but it isn’t one I find humming to myself or listening to that much.

The use of Party God in this one is a lot of fun. I feel like it only makes sense that he’d be a douchey frat boy boyfriend, and it works just as well using him in this scenario that it would with, say, Ash. It’s also a small thing, but I love how he picks everything up with his mouth, as it just hangs lightly between his teeth. That got a small chuckle out of me. Also, I think the battle between he and Ice King was actually pretty visually interesting. We don’t get a ton of inventive looking battles from AT because, well, it isn’t an action show, but this episode’s incorporation of an aerial battle between Party God and the IK was a lot of fun. And it’s pretty intense as well! I love Ice King angrily uttering, “She is not your “bid-ness”!” That was really sweet coming from him, as he is known for objectifying women, even if he is angrily giving someone comeuppance for doing the same thing. It might seem hypocritical in some instances, but again, this is Ice King, whose ability to grasp social norms is incredibly difficult, so this is a pretty significant moment.

Ice King using Party God as a puppet for Isla de Señorita to vent her frustrations out to was delightfully fucked up, but also pretty cute. The whole exchange between the two, as Ice King struggles between staying in character and unveiling his own feelings, is just great, and it saddens me that we haven’t seen these two together again. Above everyone else, the Island Lady allowed Ice King an outlet to get away from the toxicity of his wacky relationships in Ooo, and even left him with an important lesson about relationships. Though, it may not have impacted him the way she had hoped. Ice King officially “breaks up” with Princess Bubblegum, though the last line of the episode, “ah, we’ll work it out,” suggests that he hasn’t learned as much as we probably hoped. Though, this doesn’t bother me at all; Princess Monster Wife also showed that, whatever developmental changes Ice King may go through, he still is very much unstable, and there’s little that can change that as long as the crown still is taking possession of his mind. The biggest takeaway, as I’ve said, is that a friend can go a long way for the sad iceman, and it can even help him regain bits and pieces of his sanity for a period of time.

So I like it! I wouldn’t call it a particularly entertaining one, but I appreciate its tone and what it was going for. What came out of it was a very interesting look as Ice King in the midst of an acquaintance, and that’s about the best I could’ve expected out of this premise. Nice colors, nice atmosphere, and overall a really nice friendship to capture my attention throughout the episode’s run. During a Lego contest where AT fans were encouraged to build Lego figures of random characters, one person in particular made one of the Island Lady, and it looks awesome! You can check it out here.