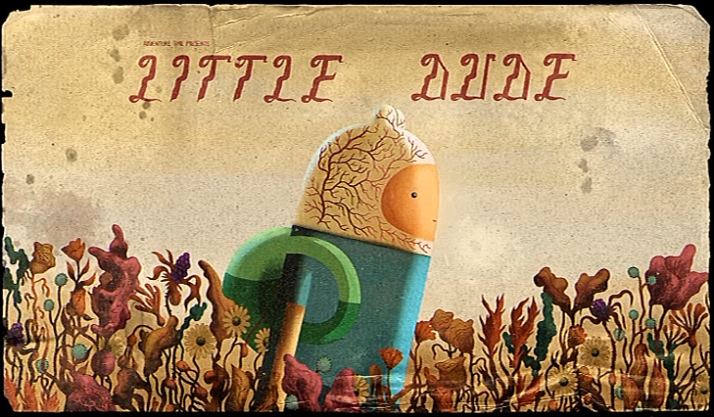 Little Dude is one I usually tend to look over and forget. It’s not a particularly bad entry, but I can’t really think of much that makes it stand out. It’s the most basic form of a fluff episode, but one that does include a decent array of enjoyable moments.

I think the concept for this episode is certainly a bizarre one, even for Adventure Time’s standards. The idea of Finn’s hat coming to life, turning things into poo, and lusting after control of others is certainly never something I asked to see from the show, but it’s silly enough that it somewhat works. I don‘t really care for the character of Little Dude too much, as I’m not really sure how we’re supposed to feel about him by the end of the episode. Like, he’s nothing but an annoyance to Finn and Jake the entirety of the episode, yet Finn angrily claims “we were supposed to be buds!” when Little Dude does goes berserk. I dunno, it seemed like a weird emotional connection that never really payed off. And of course, Little Dude’s existence meant we had to awkwardly stare at a buzzed cut Finn throughout the entirety of the episode. I admit, it was kind of humorous and interesting to see Finn’s hair this short, but it’s still just fucking weird. I mean, even though we know it’s his hat, we as viewers are kind of all under the illusion that Finn’s hat is a part of his head, so going to entire episode staring at his neck and ears and rounded noggin is just a surreal experience.

Luckily enough though, I think the episode is sprinkled with tons of silliness that I am on board with. I really like entire beginning scene with Finn and Jake trying to make a whirlpool in the water, that was classic bro stuff. I love Jake’s sassage flare, and the absolutely vile way Finn and Jake actually eat the sausages: dipped in milk. What a fucking gross atrocity that I could’ve gone my whole life without seeing. I also love to see BMO as somewhat of a mom to Finn and Jake! I’m not really one for gag characters, but I do love how BMO’s relationship with the boys can change from episode to episode. One episode he can be their sassy robot buddy, other times he’s their child, and here, he’s their mom. And a spunky mom to say the least. He hit Finn on the butt! Also, the “kiss my cook” apron was priceless. That’s gotta exist somewhere on Etsy.

This is also the Life Giving Magis’ first speaking role after his first appearance in Mystery Dungeon. I do enjoy the Magis as a character, which is mostly driven by Dana Snyder’s voice. But also, how can one not enjoy Dana Snyder’s voice? Magis gets a couple of funny moments in this one; I’m not completely down with the whole contrived daddy issues arc, because even though it’s a recurring theme in AT, there was really no reason for this one to exist outside of it being a recurring theme. I don’t really care about Magis’ daddy problems honestly, and the conflict just kind of seems unnecessary. If Magis was able to take the sentient life out of all the inanimate objects in the end, why wasn’t he able to do so to Little Dude when he was wrecking the Candy Kingdom? The simple answer is that it did allow for a pretty fun havoc sequence, and I did like the incorporation of the Gumball Guardian. It is always fun to watch him get in on the action, even if it is for only a minimal amount of time.

The climax was a bit meandering as well, but one I didn’t mind a whole lot. I did like all the funny one-liners the sentient objects of Ooo offered, and it did provide for a decent conclusion to the episode. But overall, there just isn’t a ton to this one. It’s actually funny to see just how many “fluff” episodes there are in the first half of season five; not that fluff episodes are bad but any means, but I’ve found that a good handful of these are particularly insignificant, especially after coming off of season four, where it felt like every episode was trying to be something impactful. However, season four was only half the length of season five, and things will eventually pick up once the second half of the season comes along. For now, I’ll enjoy these lighter episodes, in preparation for some of the heavier and darker stuff we get down the line.

Favorite line: “Whomever the hat possesses gains the proportional strength of a hat!”