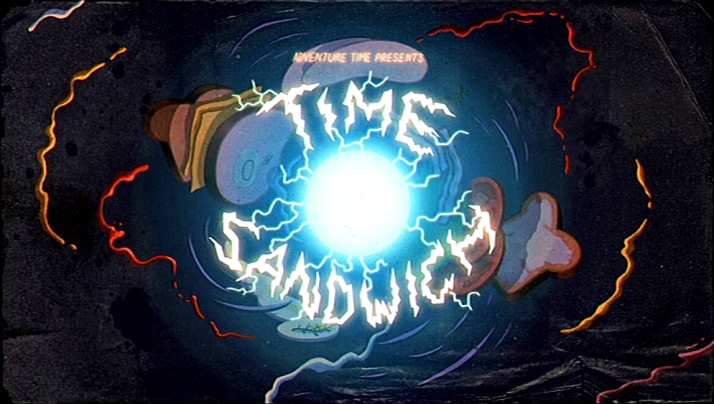 I am ready to receive instruction from the realm of creation above me and the sandwich I am about to conceive. I am open; use me.

After the emotional turmoil of Finn’s break-up with Flame Princess and the hardships it brought for the both of them, it’s nice to take a break from those hardships and sit back for some much needed fluff. And, as far as fluff goes, Time Sandwich is pretty much the pinnacle of AT standalone. It manages to be an excursion of pure fun and, in my opinion, an even better character study of Jake than Jake the Dog set out to do. 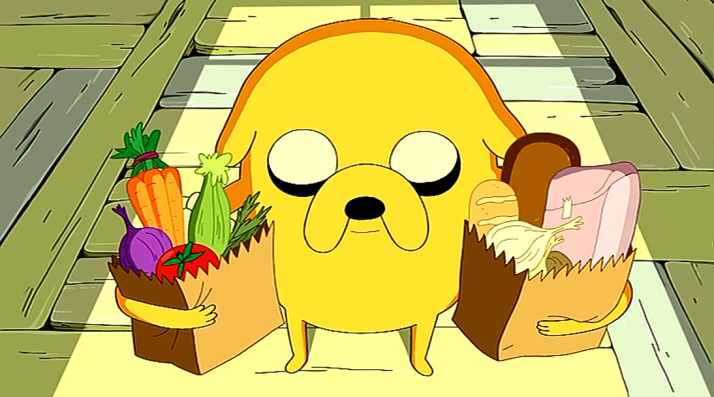 Jake is a simple dog who enjoys simple things; while every other character in the series carries with them so sort of heavy baggage that they struggle with in one way or another, Jake is there to remind us all that life isn’t as serious as we’ve lead on, and to take pride in the little things. And for Jake, the littlest big thing to him is sitting back and enjoying a tasty sandwich, and Time Sandwich shows him as motivated and inspired as ever to create the greatest bunch of joy he has ever made. The sandwich making sequence is delightful, and the sandwich itself has become somewhat of a cultural phenomenon over time. Besides the actual recipe (slightly modified) being included in the official Adventure Time Cookbook, the sandwich was also prepared on an episode of Binging with Babish with slight modifications as well. My favorite parts of the sandwich making are your favorite parts of the sandwich making; the lobster soul, the morbid inclusion of the bird from the window, the return of Prismo’s pickles, and the presentation in general are all wonderful fun that really add to Jake’s commitment and investment in this sandwich, and it helps that we as an audience are just as invested as him. Also, I just love the fact that Jake was willing to share a portion of his sandwich that he regards so highly with his friends. After his selfish actions in Jake the Dog, it really is rewarding to add this bit of selflessness to Jake, and shows the kind of person he actually is.

The return of Magic Man also provides for tons of fun! I love MM’s psychological issues that are delved into following Freak City, though it is nice to have him star in a major appearance that capitalizes on what makes him so entertaining to begin with: his apathy and overall asshole-ish nature. And it’s just as fun in this one as it was in Freak City and Sons of Mars. Of course, his screentime remains minimal after his initial introduction, though it is filled with memorable quotes and gags, namely “it’s got my germs, so it’s mine now!” and his ability to slap Jake through a personal portal. 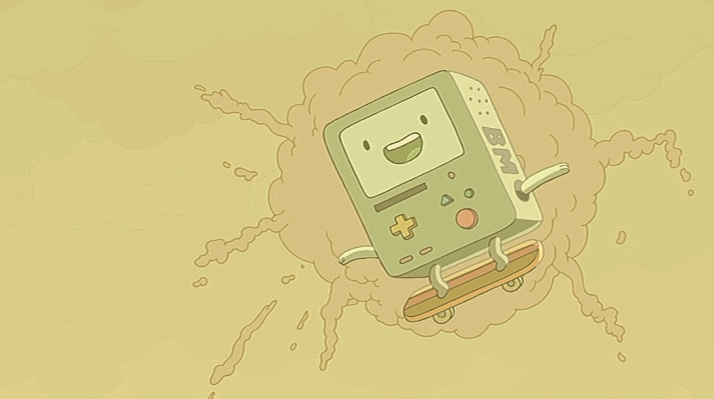 The rest of the episode is just pure Adventure Time-y goodness. Really nice individual character moments that build off of every character’s delightful personality. BMO’s somewhat selfish, but understandably childish attitude comes out in full swing, and it’s just hilarious. BMO could give less of a shit about any of the circumstances Finn and Jake face on a daily basis, he wants what he wants, yet he knows F&J aren’t always going to give it to him. So, in this case, he has to trick them into helping him film a skateboard video, because that’s what BMO does. He don’t give a fuck about no special sandwich.

PB’s inclusion adds more to her mindset when it comes to science vs. magic, and once again, her failure to understand the principles of magical tendencies backfires. She explains it quite eloquently and intelligently, yet when it comes to actually putting these mindsets into action, she’s shit outta luck. And I do admire how the idea of the existence of magic is slowly starting to rub off on her in some way. Of course, she still has her gripes with the use of magic, but she is more willing to accept that there’s things that she simply isn’t able to fix with her own technology. Think my favorite part of this sequence is that the Banana Guards stand there, hand PB a missile, and then disappear for the remainder of the episode. They really helped out in this situation. 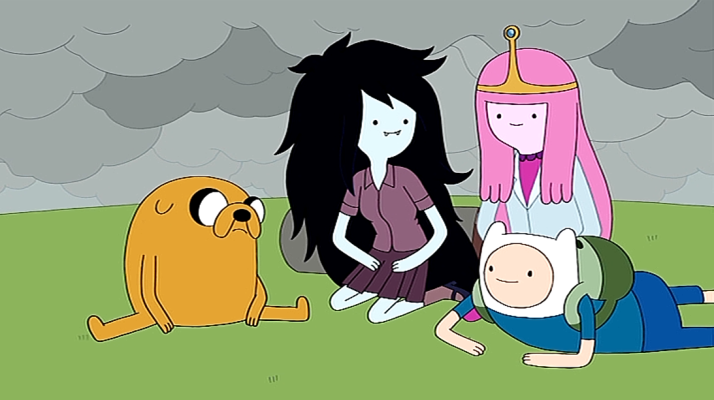 Marceline then shows up and offers the only skill she knows how to use: brute force. Her’s is less complex, but still equally ineffective. Marceline is a bit cocky in her own abilities, as she should be; she’s a half-demon, half-vampire, half-human entity that has pretty much every skillset she needs to get by. She’s from the Nightosphere, for Glob’s sake. And so it seems pretty obvious that she’d be able to get past anything with sheer strength, right? Wrong.

All of these moments are tied together by the hysterical fact that they all have the same exact outcome. By the time Marceline attempts to get past Magic Man’s spell, you’d expect the joke to be obvious and less funny by this point, but it honestly just keeps getting funnier and more entertaining as it happens. 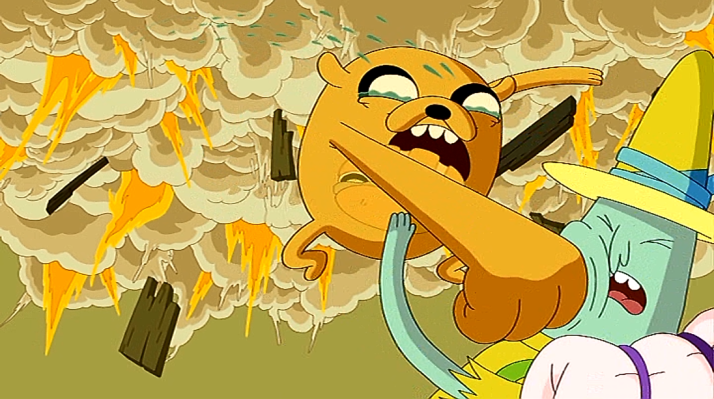 Of course, while all of this is going on, Jake is left to sulk over the separation between him and his coveted sandwich. Jake enjoys the simple things, so when the simple things are taken from him, he’s left with the same grief any of his other friends are likely to feel. This episode is also really terrific in terms of using color to set the mood; the beginning scene where Jake builds his perfect sandwich is lit brightly and colorful, while later, when Jake tries to emulate the same chain of events, the sky turns dim and solemn. Of course, we’re never actually left emotional or upset over the loss of a sandwich, but it works as an accurate representation of Jake’s feelings throughout the episode. And while we’re on a technical aspect, John DiMaggio does such a terrific performance as Jake in this one. He captures every moment and every feeling Jake is having so adequately. Through his excitement, sorrow, anger, and pure relief, every line Jake carries out is effectively funny and well-inflected, and it really just makes the character seem so much more alive and human. Not to say DiMaggio doesn’t always do a great job, but this is truly a standout performance for Jake.

When finally faced with the solution to his problem, we’re also left with one of the funniest ways Jake could possibly force himself to become sad: an imagination sequence featuring his death and the incorporation of Mr. Cupcake. The concept alone is funny; I love how the saddest thing Jake could think to experience is how people react to his own death, with the mindset that “yeah, I was a pretty cool dude to these people!” Included are the silly little details, like the fact that Jake legitimately imagined an “After Coffee” title card inside his head. It’s such a ludicrous gag, and I don’t think I’ve seen anything like it before. And the interactions between him and Mr. Cupcake in general, this long built up conflict that is really over a brief quarrel all the way back in Season Two, is just brilliant. It’s also funny to think that this effectively squashes the beef Jake and Mr. Cupcake have! It’s literally never mentioned again! Jake created a solution within his mind and cured the issue forever. How hilarious is that? 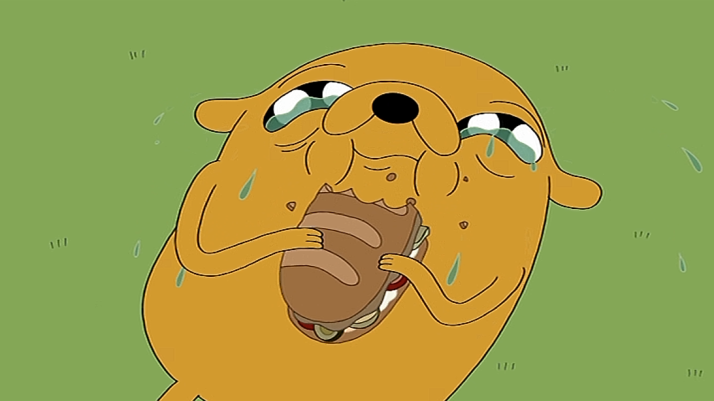 And finally, we’re met with an awesome climax sequence with some equally great animation (the drawings in general look really great in this one, courtesy of Kent Osborne and Cole Sanchez!) as everyone beats the ever-living shit out of Magic Man. I love how the recurring comeuppance for Magic Man is just socking him in the face, as it seems like the perfect response towards his sadistic ways, regardless of if it was all for a sandwich or not.

So yeah, this one is awesome! It’s hard to say why besides the fact that it’s just a ton of fun and really captures everything great about Adventure Time’s lead cast, namely Jake. And of course, the added bonuses, such as the great sense of humor, the nice colors, drawings, and animation, and just an overall breath of fresh air from the more drama-driven episodes we’ve gotten before this. It truly is a spectacle in AT fluff, and one I always love to revisit time and time again.