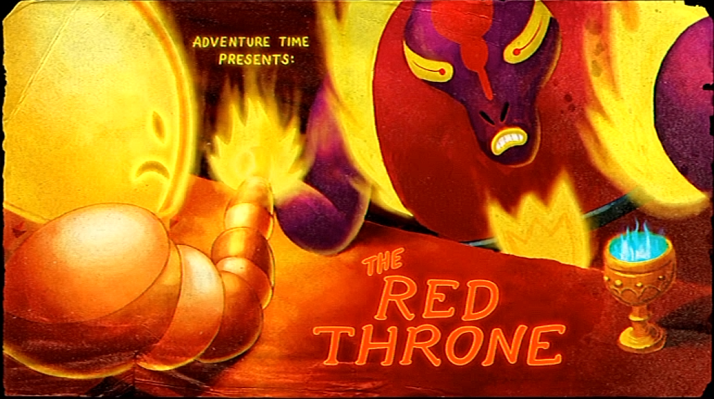 The Red Throne is perhaps Finn at his most unlikable. While he’s had his noticeable fuck-ups in episodes like Frost & Fire and Too Old, The Red Throne views Finn as a complete, pathetic mess. And by God, Somvilay and Seo Kim did not hold back with this portrayal, to the absolute detriment of the episode. While I thought episodes like Frost & Fire and Too Old were great introspective episodes into some of the darker aspects of Finn’s character, The Red Throne simply focuses on his utter stupidity, and ends up making him seem like a complete and absolute piece of shit. This is the one time in the series I can honestly say that Finn simply did not feel like the character he was made to be. It’s one thing to give him a set of flaws that he struggles with, but another to just make him completely off the walls in order to prove a point. That’s called flanderization.

The great tragedy of this one is that I actually like the premise of it. Flame Princess being usurped from her kingdom and having no one else to turn to except for Finn, as he still isn’t completely over her, is a pretty great idea. It could even go down the same path where Finn is still trying to make things work, but realizing by the end of the trip that it simply isn’t going to happen. But man, they make Finn as stupid and as creepy as possible, to the point where he seems like a legitimate sociopath. In Too Old, Finn tries to push a relationship with Princess Bubblegum in a rather creepy and manipulative way, but he’s given a reality check by the end of it and doesn’t attempt to continually pursue her from that point on in the episode. Even in Rattleballs, where he isn’t necessarily trying to force a romantic relationship, but comes off a bit obsessive and clingy, he still listens to everything that Bubblegum tells him. Here, Flame Princess tells Finn within the first few seconds of her being in the Treehouse that “this doesn’t mean we’re getting back together,” yet Finn is CONSTANTLY trying to pursue it throughout the entire episode. This isn’t a quirky little mistake or fuck-up on Finn’s point, this is borderline harassment. The point when he puts his hand on FP’s shoulder as she shakes him off, and then he scoots closer to her two seconds later is just awful. And I get the point of him acting like a idiot is so an actual idiot like Cinnamon Bun can look smarter in comparison, but the way it’s executed just leaves me with less sympathy for Finn in his actual life crisis. We’re supposed to want him to patch things up with Flame Princess, and even if he fails and is an awkward doofus about it, we can at least feel bad for him. But by the end of it, I just end up angry with Finn. This episode gives me no reason to feel for him; there’s no tragedy in the situation, or at least it feels like there’s no tragedy. It just feels like a sequence of events to show off how much of a douche Finn has become, and it’s somewhat disheartening. It doesn’t even feel like he’s attempting to be a decent person. I’d get if he was trying to be really pushy with how nice he is to Flame Princess, or if he was just a nervous dork the entire time, but having him be so forceful and unwilling to recognize boundaries makes him seem so despicable.

The funny part about the Finn aspect is that it isn’t even the worst part of the episode. The pacing is Ignition Point levels of bad, and it really shows in the scenes featuring Flame King and Don Jon. Don Jon himself is a character who is entirely insignificant; the only thing I ever remember about him is his design, though I remember thinking it was cool in Wizard Battle far before this episode even came into fruition. Don Jon’s character is dull and uninspired, with very few actual character traits and interesting abilities. Even Keith David, who usually pulls off some standout performances as Flame King, isn’t really given much to work with. And by God, do I fucking hate that overly long fight sequence between the two. Yeah, yeah, I get that it’s supposed to be a reference to the incredibly slow fight sequence between Keith David and Roddy Piper (the voice of Don Jon) in the film They Live, but when has Adventure Time ever relied completely on referential humor for laughs and entertainment? Having Roddy Piper voice Don Jon in general is enough of a satisfying homage, I don’t get why they needed to add in the fight sequence which arguably just slows down an already awkwardly paced episode. And it certainly does not translate into the animation process in a visually interesting or smooth way. 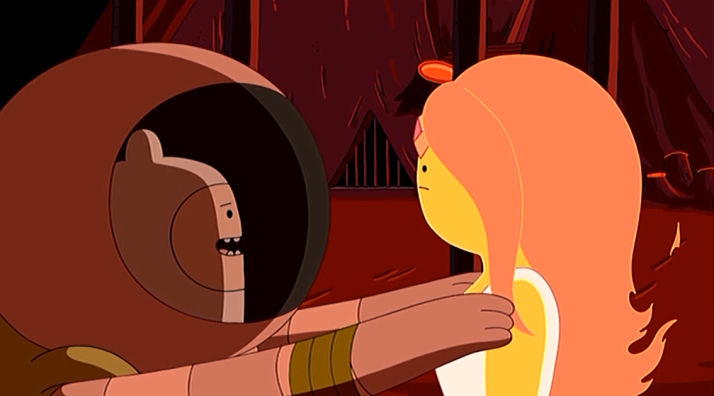 Even the bits of the episode I liked more than others were weighed down by some clunky writing. Cinnamon Bun’s transition into Flame Princess’s noble knight is a decision I overall enjoyed for his character, though I feel as though this shift from an idiot to almost entirely competent seems… unconvincing. After all, it was only three episodes ago that we saw Cinnamon Bun as stupid as ever in Apple Wedding, so I feel like watching him be this really devoted knight out of nowhere would be better presented with proper setup. Apple Wedding would have to sacrifice some of his funnier moments, though it would have been nice if he at least had some signs of growing intelligence. I do, however, like the analogy of how he was “fully baked” after being hit with a bout of fire; it’s a nice little touch for all of those paying attention when PB mentioned Cinnamon Bun to be “half-baked” in The Other Tarts. I think it definitely would’ve made more sense with the episode if CB suddenly became more intelligent after the actual baking sequence, though again, this episode really wants to emphasize that CB is being more emotionally mature than Finn. Though, I have to question, when looking at where the series is now and comparing it back to this episode, would Cinnamon Bun’s baking process actually be the reason that he’s so blubbering and stupid? It seems like all Candy Kingdom citizens are made to be inherently stupid, so I’m wondering if the “solution” to CB’s stupidity still makes sense in the grand scheme of things. But I digress.

It’s sad that Flame Princess is given a major role in this episode, because she isn’t really given a ton to work with either. Flame Princess is practically a blank slate in this one that is just simply there to react to everything going on and to continuously turn down Finn. Again, it damages the episode because it makes Flame Princess feel like an extension of Finn’s character; she’s given pretty simplistic dialogue to correspond with the events surrounding her, and the circumstances surrounding her aren’t really explored in an interesting way. This doesn’t need to be this really big, emotional episode for Flame Princess, but I just wish she felt like more than just the source of Finn’s affection. It’s quite sad, but I’m glad The Cooler explored her new position without Finn being involved.

Is there anything I like about this one? Few very moments come to mind, though I can think of a couple. Well, it’s nice to see the Fire Kingdom again, for one. As usual, it looks really nice, and I like the use of Cinnamon Bun’s flame shielded color pattern to contrast from the darker oranges, reds, and browns that the backgrounds have to offer. Really helps him pop. I like Cinnamon Bun’s new character role as I mentioned, but I would enjoy it if it felt more natural and less forced by the episode. Also, the moment when Flame Princess enters and Finn immediately lets her know that Jake is staying at Lady Rainicorn’s house is pretty funny. Though it also contributes to his horny douchebaggery, I feel like it’s an appropriate and pretty funny concept for him to immediately mention that he has the Treehouse to himself as Flame Princess spontaneously bursts through the window. Without any context, I’m not surprised that it’s the first thing that came to Finn’s mind.

As a whole, this one is a pretty big stinker. If it was done with more care and compassion for the characters, it could’ve succeeded, but instead we got a series of cheap character gags that feel hollow and heartless. The exploration of Finn’s character in regard to his break-up with Flame Princess has been intriguingly insightful thus far, so it’s quite a shame that this episode put a bit of a damper on this arc. This is one of the few times when I can honestly say I just straight-up don’t like Finn’s portrayal, and that his behavior just simply did not seem completely true to his character.

Lots of exciting episode reviews coming within the next month! These next five episodes, which I have deemed AT’s Renaissance, are some of the most enticing episodes the show has to offer. While not all of them are personal favorites of mine, they all offer something entirely different that defines what makes Adventure Time such an astounding show overall.

Favorite line: “Girls’ bathroom is over there. Also, it’s the boys’ bathroom.”