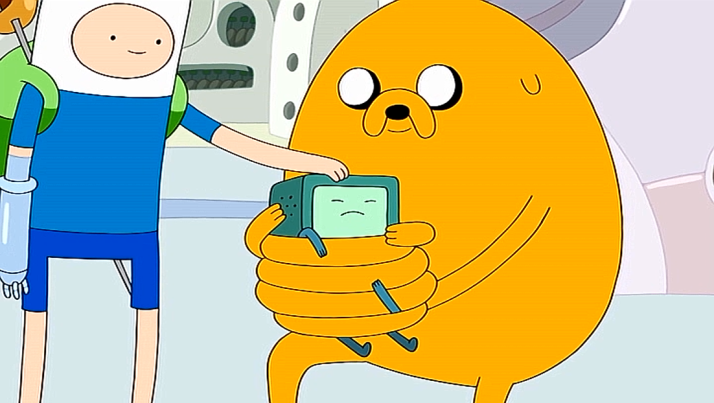 Islands is the second miniseries that Adventure Time had put out, and I think it’s arguably the best of the three. Honestly, it’s been a while since I watched Elements as a whole, so my opinion may change, but I still feel as though Islands was, at its core, the most satisfying story that Adventure Time has told up to this point. For years, myself and fans alike have been looking for definitive answers regarding Finn’s past and have really only gotten hints and teasers into his history. Islands finally offers answers, and not just answers that are dished out for the mere sake of shutting fans up once and for all. Islands intricately combines everything that we’ve ever known about Finn and the history of humanity in general and creates a whole new layer of lore that truly encapsulates the heart, as well as the sadness, of Adventure Time in general.

The opening of Islands is interestingly my least favorite of the of individual miniseries’ intros. It’s not bad by any means; per usual, it’s guest-animated by Science SARU, and they always do a stand-out job. In the same regard, I think it’s the least visually interesting, as it’s mostly limited to a long pan through oceanic scenes and backgrounds. It’s spiced up a bit through the transitions of day and night, but otherwise, it doesn’t really compare to the dark and foreboding tone that the Stakes intro accomplished or the absolute insanity that Elements was able to pull off. I also thought Jeremy Shada’s singing is strangely unappealing for reasons I can’t really put my finger on. The opening titles for Stakes and Elements always felt like big, grand musical overtures, while this intro kind of feels like Jeremy Shada came in and sang it once, and then they just went with the first take. It’s nice, but nothing particularly stellar. The best part about the intro, however, is the hilarious subversion when Jake and Finn bump fists. I’m so glad they took the time to recreate this iconic scene by choosing to exploit the clear passage in time for the funniest result possible. This bit also remained in the Elements intro, but it got the biggest kick out of me here.

Islands is probably the most tonally different from its sister miniseries(es). Nearly every episode in Islands feels different in what it wants to accomplish, ranging from a variety of different genres and themes to make it feel as though each entry is something new and fresh. While I gradually grew tired of pretty much reinstating my thoughts of Stakes in each individual episode review, the episodes within Islands always felt like their own thing and never felt stale or tedious. Even in their individuality, they still were tied to main story of Finn finding a tribe of humans and discovering himself along the way. Some entries were sillier than others; Whipple the Happy Dragon and Imaginary Resources certainly distanced themselves from the weight and heaviness of other episodes like Min and Marty and Hide and Seek, and while that is a turn-off for some, this is Adventure Time we’re talking about. I’m glad it can still tell a big, grand, and successful story without feeling too pressured to be entirely committed to drama along the way. Even within the miniseries format, some episodes still mange to be really successful standalone entries. This is most obvious with Imaginary Resources – an episode that still touched heavily on the whereabouts of humanity, as well as smaller arcs established within Islands, but one that impressed general audiences enough to snag an Emmy for Individual Achievement in Animation. 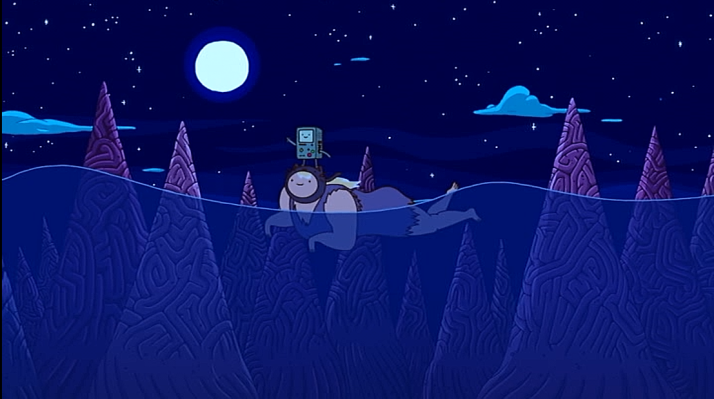 I was obviously pretty excited to see an entire eight part miniseries centering AT‘s central character, and more than anything, his arc is what carries Islands through so successfully. His main goal of finding out who he truly is explored quite subtley throughout these eight episodes. While it seemed that Finn was initially on the fence about where he truly belongs in life and if his home in Ooo is the right place for him to be, he continuously is reminded throughout the course of the miniseries of who he intrinsically is and what his place is in the world. He’s a helper, and a great one at that. While he can help people pretty much anywhere, he’s dedicated himself to helping the citizens of Ooo since he was a wee buff baby, and while he loves doing so, it just so happens that he doesn’t truly “belong” anywhere. He loves his home in Ooo and he loves living with his best bro, and as long as he’s helping people along the way, that’s truly where his place is. I don’t know if this is a real quote from the man himself, but the wiki insists that Adam Muto stated that Finn’s mother being a helper was essential to Finn’s growth as a hero. I think that’s utter bullshit, but I think it is essential to show how Finn’s behavior as a helper is what really keeps him going and makes him feel at home anywhere he goes.

While we’re on the topic of Finn’s mom, Minerva is an excellent addition to the cast. I never felt as though Finn needed caring human parents for the satisfaction of his own character arc; he already has two loving parents, Joshua and Margaret, and that was clearly identified to have been enough by the end of season six. However, using Minerva as an entity to parallel Finn’s own perils throughout his life, including the concepts of abandonment and choosing to put others before one’s self, was a pretty successful decision. It shows that, even though Minerva is a heroic helper like her son, their separation didn’t directly impact the other in any shape or form. Finn was still able to develop into a nice, caring individual without the added implication of a heroic bloodline. They’re two great people who become even greater after going through the worst of life’s circumstances, and they have each other to relate to regarding that factor.

Susan’s development also had me a lot more invested in her character than I ever deserved to be for someone who only shows up every two or three years. Her story is just as tragic as it is intriguing. For me, it’s truly reminiscent of children who are raised under toxic religious practices, only to recognize and develop into questioning their own identity and morality. Even though Susan, or Kara, ends up hurting her friend in her own ignorance, you can’t really be mad at her for doing so. It’s how she was conditioned to think and perceive, and that’s her only real reference into how society should be. Her relationship with Frieda quite nicely parallels the relationship between Finn and Minerva, in which one is unnecessarily overprotective of the other and tarnishes their freedom as a result.

The battle between freedom and safety is heavily focused on throughout Islands, and is, for the most part, handled in a stellar fashion. I was only disappointed with its coverage in The Light Cloud, as I felt the moral was hammered in to the point where it felt as if it was an attack on safety in general rather than a cautionary message about the harm of over-protection. Hide and Seek handled this dilemma in such a way where they didn’t really need to spell it out for anyone – we merely came to a conclusion based on the way that Dr. Gross uses others to get what she wants, as well as how Frieda’s desire for freedom is cut short by the rules and regulations of the island. There’s obvious dangers that can harm the humans, and while the message that’s mainly displayed is that they should live their life regardless, I feel as though not all options were explored for a potential happy medium. While this message clearly applies to our modern day world, as we have tons of different potential hazards that plague us daily, I don’t think it works especially well in a society where humans are nearly extinct as a result of the long-term aftermath of a full-blown war. It feels like this logic is just glanced over entirely for the sake of the message.

That aside, I do think the overall theme is handled mostly well, and works successfully off of what was started in the Islands graphic novel, of which I’ll be covering shortly. I had very few issues with Islands otherwise, aside from a few minor nitpicks. I thought it was kind of strange how, after recalling her past history, Susan is, for the most part, fully coherent and doesn’t look back at all on the fact that she was out of it for 16 years. This is, of course, due to the fact that there’s only so much that can be covered in 11 minutes, and also that there was just too much going on in the miniseries to begin with. Most people thought that the miniseries was too rushed towards the end, but again, I only felt hints of that in The Light Cloud. I felt as though the miniseries did everything to could in its eight episode span, and covered it quite successfully, at that. A lot of others complained that we didn’t have more time dedicated to Finn and Minerva spending time together, but I thought it was for the best, honestly. I’d like the personal moments between the two to be left up to speculation as much as possible. It allows for as many conversations as the viewer would like to take place.

Any side stories and characters were welcomed as well. Alva is definitely the most likable character in the entire miniseries, BMO’s reign as a mod was loads of fun, seeing more of Martin was much appreciated, and Frieda is a cute and enjoyable rebel. Again, there’s a nice balance of stuff on the side of the main adventure with Finn. The miniseries never fully takes its focus off of our hero, but it does allow for other characters and tales to be fleshed out to their best abilities.

Islands never skips a beat, having a couple of problematic episodes (The Light Cloud and Whipple) but never actually churning out a stinker. While I thought that Stakes was fanservice-y for the worst of reasons, Islands manages to be so for the best of reasons, allowing the staff to fully commit to a passion project that felt as if it was years in the making. We’ve journeyed through Finn’s life a number of times, but I don’t think we’ve ever experienced an adventure as poignant and worthwhile as this one. It’s likely Adventure Time‘s most well-awaited stories to date, and one that almost makes those years of waiting for answers even more rewarding.